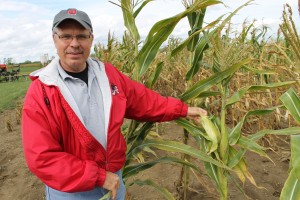 LONDON, Ohio — The record-setting drought of 2012 has finally let up for much of Ohio — with steady rain events the last couple weeks.

But undoubtedly, the damage is already done and will continue to be a problem the rest of this year and into the first half of 2013.

The long-term effects of drought were a big topic at the 50th Farm Science Review, held Sept. 18-20, where seed salesmen and agronomists talked about the many challenges of what’s ahead.

A big issue will be the carryover of herbicides. Because certain regions received little rain, herbicides are less likely to have broken down in the soil, and could still be active through winter and into spring.

Jeff Carpenter, U.S. corn portfolio manager for DuPont, said triazines and Atrazine are the ones to watch in particular. He said there’s not much farmers can do other than to “know what rates were applied and when the applications were made.”

If the herbicide is still active, the signs will show.

“If there aren’t a lot of winter weeds and you’ve normally seen them, then there’s probably triazine still there,” he said.

Carpenter suggests farmers be clear with custom herbicide applicators, about everything that’s already been applied to the field, to avoid as many problems as possible.

Farmers will also need to be mindful of soil fertility, which will likely be different this fall than most.

The phosphorus and potassium are likely still in the soil, he said, but the nitrogen will be lost over winter.

Soil tests can help determine fertility, but even they will be more difficult this fall and the coming spring. The reason is dry soils.

The authors advise waiting to test soil until the moisture returns to normal, and the test probe can be inserted into the soil 6-8 inches.

LaBarge said he doesn’t expect any major issues with seed corn or seed soybean supplies, because those seeds are grown across such a broad region of the country, as well as other countries, that there shouldn’t be much of a loss. Seed production is also often irrigated.

Seed and fertility companies, in general, have been working to improve drought tolerance, especially with corn.

For Pioneer, a big breakthrough has been their AQUAmax corn products, which make the most of drought situations.

Dennis Wickham, area agronomist for Pioneer, said “there is no bullet proof system for drought,” and this year was living proof.

The problem with this year’s drought, he said, is that it was dry early and got drier as summer progressed. And, there was record heat, which added even more stress.

AQUAmax is billed as a product “that delivers total product performance” by minimizing risk and maximizing productivity. Wickham said it does as it’s advertised, but it was still put to a test this year and likely performed differently for different farmers, depending on their region and how much rain they got.

No matter how great the technology, Wickham said crops still need “some” water in order to perform. The advantage of advanced hybrids is that that they help lengthen the window of opportunity for the plant, he said, to receive the rain it needs.

On the upside, the drought has helped give farmers and seed researchers a valuable research opportunity to see just how well their seeds actually do during a drought.

The biggest problem for testing what works during a drought, Wickham said, is that you basically need a dry year to perform the tests and know.

“You don’t hope for a drought, but when you get one you try to learn what’s going to happen,” he said.