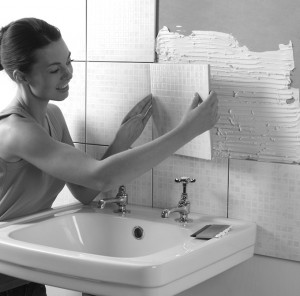 NEW YORK — According to the Remodeling magazine’s 2011-12 “Cost vs. Value Report,” which compares the average cost for 35 popular remodeling projects with the value those projects retain at resale, homeowners can expect to spend upward of $52,000 on an upscale bathroom remodel.

That makes a bathroom remodel one of the more expensive home improvement projects a homeowner can undertake. For many homeowners, that costly price tag is simply too much money to commit, especially in an economy where money is still hard to come by.

Fortunately, there are several simple ways homeowners can give their bathrooms a new look and feel without breaking the bank.

One of the best ways to give a bathroom a new look is to replace the traditional tub and showerhead with a bigger, more airy shower. Such showers are typically found in modern hotels that boast luxury amenities. Instead of the tub and slide glass, choose a hinged door with heavier glass, replacing the bathtub entirely.

Add windows and a skylight

Many bathrooms, particularly those in older homes, sorely lack adequate lighting. Adding some extra windows and a skylight can give a bathroom an entirely new look, even if you don’t replace any of the existing features or fixtures.

Sunlight can make a bathroom more inviting, giving the room the feeling of a sanctuary that many of today’s homeowners prefer.

Just like they offer larger showers with more room to breathe, many luxury hotels now ensure guests can be entertained even while they’re in the bathroom. Such hotels often feature small flatscreen televisions that sit behind the bathroom’s mirror. Guests don’t even see the television until it’s turned on.

Homeowners can bring this luxury into their own homes. This is especially valuable to homeowners whose bathrooms currently feature soaking tubs where they can escape the daily grind with a hot bath, and now watch a little television while they soak.

Many homeowners cite their bathroom’s tiles as the feature they would most like to change. Old linoleum tiles give many bathrooms a dated look that few of today’s homeowners find appealing.

Glass tiles are growing in popularity, but those old linoleum or glazed tiles can be swapped out with porcelain or stone tiles to give the room an entirely new look without spending excessively.

Another easy way to give a bathroom a new look is to replace the toilet. Older toilets may be eyesores and many are not very eco-friendly, either. A new toilet can give the bathroom a sleek, modern look, and since many of today’s luxury models are low-flow, you’ll also save money on your monthly water bill while doing something good for the environment.

Renovating a bathroom is a top priority for many homeowners. But if a full-scale remodel is not within your budget, there are still plenty of inexpensive ways to give your bathroom a new look and feel.