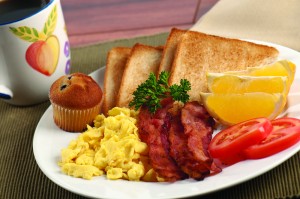 WASHINGTON — Shoppers paid slightly more for food at the grocery store during the third quarter of the year, with many popular breakfast staples showing an increase in retail price.

The informal survey shows the total cost of 16 food items that can be used to prepare one or more meals was $51.90, up $1 or about 2 percent compared to the second quarter of 2012. Of the 16 items surveyed, nine increased and seven decreased in average price compared to the prior quarter.

The cost for the overall basket of foods decreased about 2 percent compared to one year ago. Most of the slight quarter-to-quarter increase in the marketbasket of foods can be attributed to higher retail prices for breakfast staples, apples and bagged salad.

“While prices were up from the second quarter, compared to a year ago, the marketbasket price was actually lower, by about 2 percent,” said John Anderson, AFBF’s deputy chief economist.

“For most of this year, food prices have been relatively stable. This is consistent with the very slow but steady growth in the general economy that has been seen throughout the year, along with fairly stable energy prices.”

The year-to-year direction of the Marketbasket Survey tracks with the federal government’s Consumer Price Index report for food at home. As retail grocery prices have increased gradually over time, the share of the average food dollar that America’s farm and ranch families receive has dropped.

“Through the mid-1970s, farmers received about one-third of consumer retail food expenditures for food eaten at home and away from home, on average. Since then, that figure has decreased steadily and is now about 16 percent, according to the Agriculture Department’s revised Food Dollar Series,” Anderson said.

Using the “food at home and away from home” percentage across-the-board, the farmer’s share of this quarter’s $51.90 marketbasket would be $8.30.

AFBF, the nation’s largest general farm organization, has been conducting the informal quarterly Marketbasket Survey of retail food price trends since 1989. The mix of foods in the marketbasket was updated in 2008.

According to USDA, Americans spend just under 10 percent of their disposable annual income on food, the lowest average of any country in the world. A total of 79 shoppers in 26 states participated in the latest survey, conducted in August.