ALEXANDRIA, Ohio — For most people, caring for 2,000 head of beef cattle would be quite the challenge.

Indeed, there are days when it is.But Phil and Barb Watts of Licking County have been able to make that chore manageable, and on just a few acres of barn space.

They also farm 1,700 acres of crops, while Phil works off the farm as president of the Granville Milling Company. About half of the cattle are kept at this farm, and the other half at a local contract feeder.

Their management has earned them the 2014 Commercial Cattlemen of the Year — an award sponsored by Farm and Dairy and presented by the Ohio Cattlemen’s Association. They will be honored Jan. 25 during the OCA’s annual meeting.

Driving by their farm, located between the communities of Granville and Alexandria, it’s easy to see the Watts take management seriously. Their buildings are neat and tidy, with new metal siding and roofs. 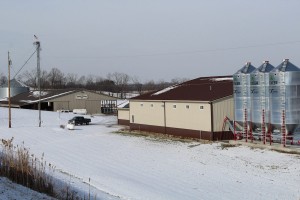 The main cattle barn was constructed in 2006, when a road-widening project took out some old buildings and prompted the Watts to rebuild. At that time, they built a pole-style barn that suits the needs of a commercial cattle operation.

“It was good and bad,” Phil Watts said. “We hated to lose some ground and property and barns, but on the other hand, now we don’t have to fight the traffic like we did.”

Inside of the cattle barn, things look a lot like a stockyard. The pens are rectangular and typically hold about 50 head per pen. The smaller pens hold sick animals and anything that needs separated from the group. The pens have a hard floor, but are bedded down with straw and chopped cornstalks.

A concrete feeder runs the outside length of the barn and is covered with enough roof extension to keep the feed dry and clean. Being in the feed business, Phil mixes his own rations and runs the TMR mixer up and down the feeder once a day.

There’s also an overhead walk-way that provides a good view from above, in case cattle need sorted or identified.

Their son, Nick, is 34 and helps with the feeding and other chores. The Watts employ two full-time workers and about three who are part-time.

They buy their feeder calves between 400 and 500 pounds from United Producers in Kentucky — all black and white Holsteins. The Holsteins cost less compared to colored breeds, and Phil said they produce well.

“And, they’re a whole lot easier to handle,” Phil said. “Other than chewing the barn down and licking everything.”

Barb Watts helps with books and office work, but she also runs the tractors and the combine, and during harvest, she spends a lot of time running the grain cart. The Watts haul their own cattle and contract them with buyers at the time they’re put in the barn.

Typically, they contract with JBS in Michigan and Tyson in Illinois, and haul regular semi loads of cattle to those plants as the cattle are finished.

With contracts, the Watts have a better chance of assuring themselves of a profit, and providing the packer with meat at a fair price that reflects the cost of production.

The Watts were surprised to learn they had been nominated for the award. To them, farming is just their way of life and something they both grew up around. Phil was raised on a small farm close to his current farm, and Barb grew up on a 1,000-acre hill farm in Coshocton County, where they raised cattle and sheep.

“I don’t know what else to do,” Phil Watts said. “It’s what we’ve kind of always done — we love the livestock — we like the cattle. You’ve got to enjoy livestock or cattle to do it, because it sure is more demanding than just being a grain farmer.”

Of course, there is plenty of grain farming that gets done on the Watts’ farm. They produce about 1,200 acres of corn, along with 500 acres of soybeans and a couple hundred acres of wheat. But when it comes down to it, Phil said he’d rather work with the cows.

“I would rather go do chores than run a finishing tool in the field,” he said. On the other hand, “We have some employees who would rather do (field work), so they do that.”

Phil has been raising beef cattle on a commercial scale for at least the last 15 years. One of the things that helps him the most is his experience with the feed business.

He started working for the Granville Milling Co. right out of high school, in the late 1970s, and has learned a thing or two about how to mix rations and how to adjust them. 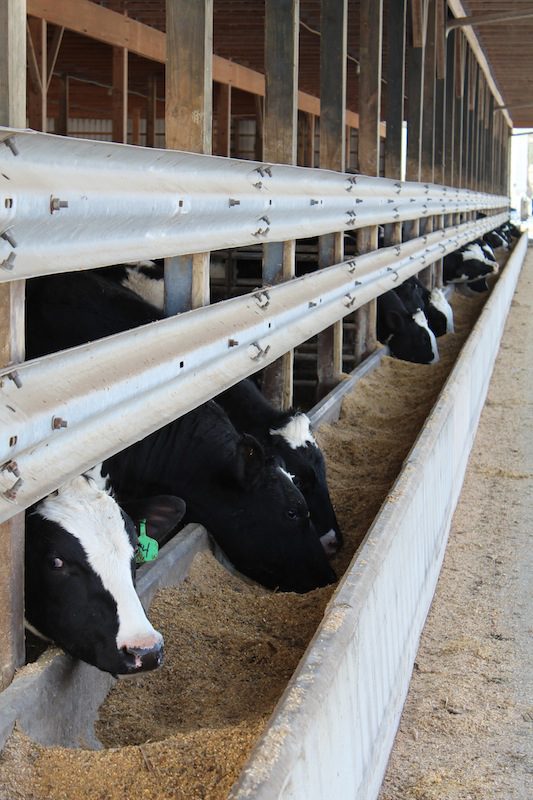 He feeds distillers grains and corn silage, along with some corn supplement. Everything is always under scrutiny and he changes the ration as needed.

“If you don’t do some of those things with advanced nutrition, you’ll never make it,” he said. “You can’t follow along for too long without change.”’

Elizabeth Harsh, executive director of Ohio Cattlemen’s Association, said Phil has a “keen sense of nutrition” and knows how to market his animals.

“Their operation, no doubt, has a very big stake within the beef business,” she said. “They themselves are tremendous advocates in terms of promotion and advocating on behalf of the beef industry.”

Dave Felumlee, chairman of the Ohio Angus Association board and a director with the Ohio Cattlemen’s Association, said the farm looks good from the road, and from the inside.

“They’re very conscientious to do things the right way,” he said, adding that they have “a good, well-run farm.”

Felumlee raises Angus cattle about 15 miles east of the Watts farm. He has known the Watts for many years and describes them as sharp, knowledgeable and dedicated.

“Phil knows his markets — what he’s got to do to do make a profit and he manages accordingly,” Felumlee said.Asked about his philosophy on farming, Phil said you need a good work ethic and to be able to manage.

Barb said “you’ve got to put in a lot of hours” and have people involved who you can trust and who know what needs done.

Over $20,000 available in beef industry scholarships