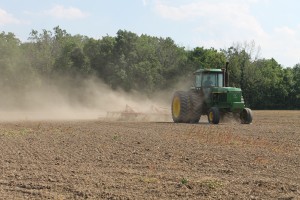 SALEM, Ohio — Farmers who were concerned the U.S. Environmental Protection Agency was going to change the way farm dust particles are regulated can breathe a dust-free sigh of relief.

The federal agency announced Dec. 14 it will not change existing daily standards for fine particles and coarse particles, which includes dust from farms and other sources.

Instead, the EPA focused on updating its national air quality standards for other fine particle pollution, including soot, with an annual health standard of 12 micrograms per cubic meter.

By 2020, the agency predicts 99 percent of U.S. counties will already meet the revised standard, without any additional actions.

“These standards are fulfilling the promise of the Clean Air Act,” said EPA Administrator Lisa P. Jackson, in a statement to media.

U.S. Sen. Pat Roberts, an outspoken critic of the EPA’s attempts to further regulate farm dust, said the decision is a good one for America’s farmers.

“I am pleased the EPA made the common sense decision to leave dust standards unchanged for rural America,” Roberts said. “Whether it is cattle kicking up dust in a feedlot in Larned, Kansas, or wheat being harvested on a hot afternoon on the High Plains in June, dust is a naturally occurring event.”

He said farmers are natural stewards of soil and water, and should not be over-regulated.

“Our producers deserve respect and appreciation from the EPA, not costly and redundant regulation.”

“There has been a lot of misinformation circulating about supposed regulatory overreach so this final rule will hopefully put to rest any remaining anxiety regarding ‘farm dust’ regulation by EPA.”

The National Cattlemen’s Beef Association said it was pleased with the decision, but disappointed it could not secure a permanent pass on the EPA’s annual dust particle review, which happens every five years.

“NCBA is pleased that EPA has decided to retain the current coarse PM (particulate matter) standard and did not make a bad situation worse,” said NCBA Deputy Environmental Counsel Ashley McDonald. “Unfortunately, cattle producers did not get the permanent certainty they were seeking in the form of legislation and will again face a review of this standard within five years.”

According to a statement from the EPA, fine particle pollution can penetrate deep into the lungs and has been linked to a wide range of serious health effects, including premature death, heart attacks, and strokes, as well as acute bronchitis and aggravated asthma among children.

A federal court ruling required EPA to update the standard based on best available science. The announcement, which meets that requirement, builds on “smart steps” already taken by EPA to slash dangerous pollution in communities across the country.