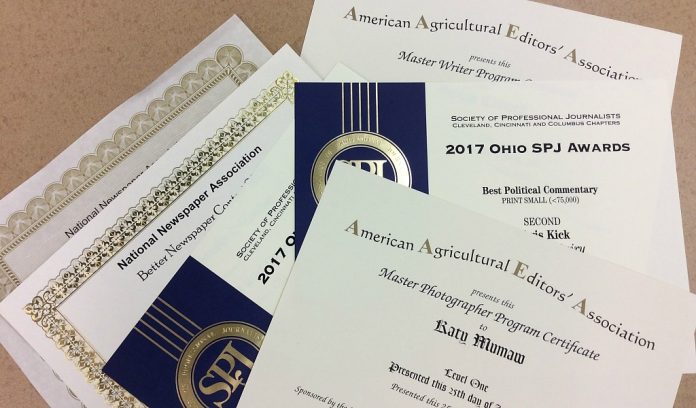 “Every year, we put our work up against much bigger publications and staffs because we try to give our readers the absolute best coverage we can,” said Editor Susan Crowell. “And these awards prove what we preach here in the newsroom: We may be small, but we’re mighty.”

Kick also placed second in Best Feature Reporting in the same circulation division, for a trio of feature articles.

In the National Newspaper Association, Reporter Catie Noyes received second place in the video journalism category for her video “Not your grandfather’s farmers market.”

And this was the first year Farm and Dairy participated in the contests coordinated by AAEA, the Agricultural Communicators Network (formerly known as the American Agricultural Editors’ Association.

The Ohio SPJ awards recognize excellence in television, radio and print journalism. The National Newspaper Association contest, which drew 1,433 entries this year, awards honor the best in community journalism. The AAEA program recognizes the top work from writers, designers and photographers in the agricultural media field from across North America.