SALEM, Ohio — Low commodity prices apparently haven’t stopped the increase in farmland values for most landowners in the Farm and Dairy readership area.

Farmland in Ohio, Pennsylvania, West Virginia, Kentucky and Indiana all saw increases over the previous year, according to the National Agricultural Statistics Service, which puts out an annual farmland values report each August. 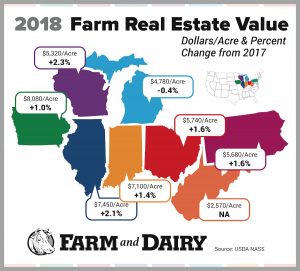 While the values may be inching upward, farm profitability is not.

According to the U.S. Department of Agriculture, net farm income, a broad measure of profits, is forecast to decrease $4.3 billion (6.7 percent) from last year, the lowest net farm income level in nominal dollar terms since 2006.

Profits from most major commodities are expected to be lower this year, with a 1 percent increase in overall production costs.

While the USDA report uses statewide and national averages to determine the value of farmland, another report, produced by Ohio State University ag economist Barry Ward, focuses on counties in the western half of Ohio.

According to that report, which relies on feedback from 108 surveys provided by farmers, farm managers and rural appraisers, cropland values in Ohio are actually set to decrease by 1.7 to 3.6 percent in 2018, depending on the region and land class.

Cash rents, likewise, are expected to decline from 1.2 percent to 3 percent.

“It’s already not even close to paying for itself,” said Wallbrown, whose family farms about 3,500 acres.

But Wallbrown said there still seems to be ample buyers who are looking for an investment, or who have a long-term plan and a well-established base.

He said many farmers still have money left from farming’s good years, 2009 to 2014, and if they want a piece of land badly enough, they’ll pay what it takes.

That has been the case across Ohio — where sale prices frequently fall outside the state averages. Prime farm ground in the northern and western portions of the state tops $8,000 an acre on a regular basis.

And, there are times when the price goes much higher, depending on demand, and location. In eastern Holmes County, home to one of the world’s largest Amish populations, land often tops $10,000 an acre.

“That area (Holmes County) seems to be insulated some from the highs and lows of the market,” he said.

Kaufman said location is key to how a property sells. If it is close to larger farming operations, and the acreage is desirable and it tends to sell well. He’s seeing an increase in residential values, and also in hunting and recreational ground, in part from the shale gas boom in eastern Ohio.

If drilling activity continues to spread westward across Ohio, it is likely those areas will see an increase in farmland values, as well.

Dick Kiko, CEO of Kiko Auctions, said his company is still seeing an increase in farmland prices, but it depends on location, road frontage and local demand.

Kiko said auctions usually get broken into one of three categories: residential, farmland and recreational land, and so far, residential and farmland continue to compete with each other, he said.

Kiko said the recent lows in farm commodities have encouraged older farmers to consider retirement, and because many do not have a farm succession plan in the family, the land ends up going to auction.

On the flip side, he said younger farmers often need more land to survive, so they’re driving the demand side of the market.

Craig Dobbins, an ag economist with the Purdue University, said in a released statement that production agriculture is always tricky, but even more so given the limitations to current U.S. export markets.