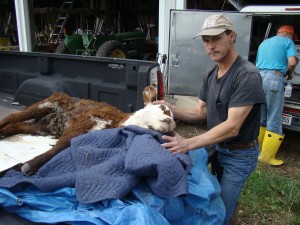 (Story has been updated to include additional reward information)

LISBON, Ohio — The reward for information leading to an arrest in the Columbiana County calf burning case keeps growing, and has now surpassed $12,000.

Ed and Tammy Sabol, of Lisbon Road, found the 220-pound heifer calf Sept. 30, barely alive and suffering from burns to her hide and flesh across a large portion of her back and lower body. The calf was taken to a local veterinarian, where it was was euthanized.

Andy Sweeney, a detective with the Columbiana County Sheriff’s Office, said there have been no arrests made but he continues to receive case information and is following up with what he has.

The reward is being handled by Glenn and and Patte Boros, owners of Auto Spa car wash in Canfield. They are taking pledges and said no money will be rewarded until an arrest and conviction are made.

LISBON, Ohio — A Columbiana County couple is searching for answers after finding one of their beef calves severely burned while grazing on pasture.

Ed and Tammy Sabol, of Lisbon Road, found the 220-pound heifer calf Sunday morning barely alive and suffering from burns to her hide and flesh across a large portion of her back and lower body.

They wrapped her in blankets and rushed her to the local veterinarian — David (Doc) Smith — who estimated the calf had been burned sometime Friday, Sept. 28, with an accelerant. Smith said the calf was missing some of its hide and was infested with insects. He decided the best thing was euthanasia.

“I was literally amazed that the calf survived that long,” he said. “It was basically in a state of shock.”

The Sabols said the mother cow has taken the loss hard, pacing back and forth and bellowing loudly for her calf to return.

When they got the calf back from the vet, the Sabols placed it with the mother cow, to show her it was dead.

“She’s finally accepted it,” Tammy Sabol said. “We left the calf with her a few hours so she could have a closing, so she didn’t continually look and holler and scream.”

Tammy Sabol said her cattle are tame and a person can easily walk up to them, even on pasture. The Sabols later found part of a cow’s tail in the pasture, which they said had been cut from the mother cow.

The abuse has outraged area residents and business owners, so much that they’ve teamed together to offer a reward for information leading to an arrest.

Glenn Boros and his wife, Patte, owners of Auto Spa car wash, have pledged $1,000 to the cause and are handling the reward. No money will be paid or collected until an arrest is made.

“When I saw that cow on TV searching for her baby, it just broke my heart,” Patte Boros said. “It’s just horrible.”

The Columbiana County Farm Bureau is offering a $2,500 reward for information leading to the arrest and conviction of those involved. The organization said it “denounces” this act.

This is not the first time the Sabols have lost an animal to abuse. A couple years ago, one of their cows was shot and had to be put down.

The Sabols raise 24 head of beef and keep the animals on pasture. This year, they expanded their pasture acreage because of the drought, to provide additional grazing opportunity.

No suspects have been named, but the Sabols said they are concerned about a neighboring baseball field, where young people often gather at night.

Ed Sabol said he appreciates the kids who play ball there, but wishes they would put up the cables when they leave.