BEVERLY, Ohio — The Fort Frye, alongside Waterford and Marietta FFA chapters debarked on the six hour journey to Louisville, Ky., for the 87th National FFA Convention.

The members attended Churchill Downs, home of the Kentucky Derby Oct. 30. On Oct. 31, the members wore official dress to Freedom Hall, and were able to shop and look at the exhibits.

Giffin and Whalin are members of the Waterford FFA chapter.

Giffin is the daughter of Jim and Terri Giffin and is currently majoring in early childhood education at the University of Rio Grande.

Whalin is the son of Brian and Elaine Whalin and is currently majoring in meat science at The Ohio State University.

The chapter went to the Louisville Slugger Bat Factory. After this, the chapters made their way to the Career Show. The Career Show is a way for students to interact with employers or colleges with the opportunity for recruitment and networking. At this time, several students competed in the National Agriscience fair with their projects.

Nathaniel Freeman, Sky Graves, Alanee Rae, and Olivia Pflaumer, were the four students from the Zane Trace FFA chapter who competed. Later that day, Ashley McCollough went under at the Hypnotist Show.

The students traveled to Mega Caverns for zip lining in a cave. Students also went to the Buckeye Bash dance. This is a dance for Ohio FFA members only.

The two chapters got floor seats to hear Jeff Simmons, president of Elanco Animal Health, speak. This was the last session the majority of the two chapters attended.

Sarah Cox went on stage as a Star Award finalist. Sarah was one of 16 finalists, with only four in her category of Agriscience Research.

After both big wins, Hoey and Cox went on to receive their American Degrees along with David Glass.

In addition, the Zane Trace FFA Food Science CDE team recently placed first out of 12 teams in the District 7 contest which was held Nov. 12 at Zane Trace High School. The team consisted of thirteen students in grades 9-12 who tested their skills in six practicums related to food science and technology. The team members conducted aroma identification, flavor identification and taste test panels in addition to answering questions about food safety, sanitation and equipment.

A total of 36 members of the Zane Trace and Paint Valley FFA chapters traveled to The Ohio State University to participate in the OSU College of Agriculture Night at the Schottenstein Center Nov. 7. The group had the chance to enjoy pizza on campus, learn about opportunities at OSU then watch from front row seats as the Buckeye Ice Hockey team took on the team from Nebraska-Omaha. 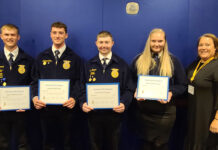