AUBURN, Ohio —  Pizza, peppers and produce are keeping a Geauga County family in production mode throughout the year.

Wait a minute, what does pizza have to do with a family farm? The Sirnas are making “farm fresh pizza” a reality — using their farm products on their pizzas, often the same day the produce was picked.

Craig Sirna served his community as a full-time police officer in Bedford Heights for 34 years. Then he and his family decided they wanted to move out from the hustle and bustle. 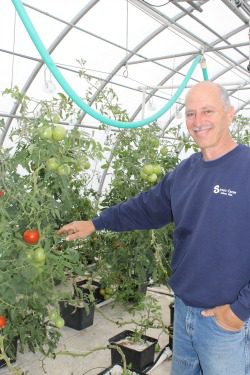 Sirna, his wife, Anne Marie, his son, Anthony, 30, and two daughters, Kristen, 29, and Kaitlyn, 22, now all have a role in the farm or family business.

When they found what is now their farm 17 years ago, it was owned by a land developer and they found themselves making a deal to purchase it. Sirna said he knew it was meant to stay a farm.

Today, the Sirna Farm is comprised of 43 acres, and 30 acres of that is woodlands. The Sirnas rent additional acreage and farm a total of 150 acres.

“This is a family operation. We take pride in our farm, pizza and products,” said Sirna.

Sirna is quick to point out that he is a first generation farmer and admits there was a lot to learn about the farming industry in the beginning.
The biggest lesson? Farming is not easy.

When Sirna purchased the property, he had no idea what he was getting into or what he was doing. Now, he can’t imagine his life without farming in it. He said he considers it an honor when people new to agriculture ask him for help. He said he still considers himself still learning, but he is happy to pass on what he has learned to beginning farmers including marketing tips or how to care for vegetable plants.

The Sirnas started out growing vegetables in the front yard, and selling them at a little roadside stand. Then they started growing more vegetables and eventually expanded the farm.

The Sirnas use raised beds, high tunnels and hydroponic production to grow produce in an extended season, including tomatoes, peppers, lettuce, cucumbers and other vegetables. 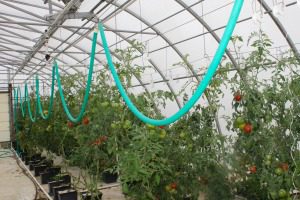 The family farm also raises 20 head of grass-fed purebred black Angus cattle. The beef is then sold in their farm market as ground beef. Instead of separating the meat into different cuts, such as steaks and roasts, the entire beef is made into ground beef.

Sirna said he learned the beef lesson early on in the business. He said it didn’t work logistically for the beef to be sold by the whole, half or quarter, and freezer storage was also an issue.

After battling weather woes at the roadside stand for a few years, the family decided they had built up a produce business strong enough for a permanent building.

Although they started out with one floor plan, they have made various changes to remove walls, and add more coolers. 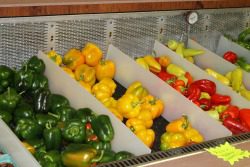 In addition to vegetables and fruits, the Sirnas stock their farm market with either locally grown or Ohio-grown products, although Sirna says it can be difficult to find quality products at times.

They stock locally roasted coffee and specialty canned goods, and boasts one of the largest Ohio wine selections in the state. Sirna said they recently received a permit to begin holding wine tastings.

The farm produces its own maple syrup. In 2014, the farm had 314 taps and produced 80 gallons of finished syrup. In addition, there are five bee hives on the farm so the family can get the pollination benefits and then sell the honey.

The family also plans a fall festival yearly. The events give consumers a chance to get out of the city and learn what farming is about. The event includes a 1 1/2 acre maze for children.
The farm also participates in two farmers markets, Crocker Park’s outdoor and indoor markets in Chagrin Falls and the Shaker Heights winter indoor market.

Sirna said he had to learn about growing with hydroponics through trial and error to get to the point where he is now with his vegetable production. But now he uses that knowledge to help others starting out to save steps in the learning curve. 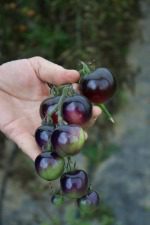 A big lesson has been how important bugs are to the health of the vegetable plants.

“You have to buy good bugs to kill the bad bugs,” said Sirna.

Sirna said when his operation does run into a problem, he uses organic methods to get the job done.

When the right business adventure came up for sale in 2013, they decided to jump in with both feet.

The family purchased a pizza shop within a couple of miles from their farm. It was run down and needed work, but the family went to work fixing it up. They are celebrating their first anniversary in business this month.

Sirna’s youngest daughter, Kaitlyn, maintains day-to-day operations, but with her mom’s help when it comes to pizza production.

Anne Marie makes the pizza sauce every day. She said she loves to pick the vegetables in the morning and take them straight to the pizza shop and begin making the sauce. She said the taste changes if it is not made every day.

What makes their pizza shop unique is that it is one of the only places where the owners grow the vegetables and put them on a pizza they make that day.
In addition to their own tomatoes, they use homemade Italian sausage and nitrate free bacon. Both are family recipes from either Sirna or his father. The family gets the pepperoni from an Ohio farmer. Their goal is to use as many locally grown or produced products as possible, if they can’t do it themselves.

The family has a lot to celebrate when it comes to their pizza and what the public is saying about it. Sirna’s Pizzeria has been voted best in Lake and Geauga counties and brought home seventh in the northeast Ohio Plain Dealer Pizza Challenge.

Sirna said their family is about helping and giving back to the community.

Beyond serving on the Geauga County Farm Bureau and being a member of the local Chamber of Commerce, Sirna said he knows how important the community is to a successful business.

As a former police officer, certain causes are close to Sirna’s heart. He has a standing order once a month for the Geauga Woman Safe program where the organization can get pizza for victims.

“I’m a worker. Unless I’m working and helping people, I’m not happy,” said Sirna. “You can’t take it with you.”