SPARTANSBURG, Pa. — If you want to find Troy Firth, there’s just one place to look: in the woods.

Firth and his wife, Lynn, own Firth Maple Products in Spartansburg, in northwestern Pennsylvania. However, what started as a maple syrup business has expanded over the years into a sustainable forestry enterprise as well.

Firth caught the maple fever as a youth. He made maple syrup for the first time as a kid in grade school and loved it. Then years later in college, he made syrup with a friend and knew it was something more than a hobby.
He took some time off of college and worked as a logger. With the money he saved, Firth purchased his first group of sugar bushes in 1972.

Then, in the middle of the 1980s, he started a sawmill business and purchased some more land.

Firth made his first land purchase simply as an investment. At the time, he had no idea it would trigger a passion for forestry. Today, he owns 7,000 acres and manages another 8,000 acres.

Today, there are three segments to the Firth business, The first is the maple syrup business, and Firth’s maple syrup production is second largest in the Commonwealth.

The second enterprise is the log division, which is the biggest part of the Firth business. The company sells a lot of a veneer logs particularly overseas.

The third section is the sustainable forestry division. Today, Firth manages forests and woodlands for roughly 40-50 clients who want their forests managed well.

As Firth worked in the woods, he realized there were some things about conventional forestry that went against nature, and he didn’t like it.

So he started changing the ways he managed forest land, and discovered he could still develop nice logs, healthy trees and a good ecosystem in the woods.
To the Firth family, sustainable forestry does not mean leaving a forest alone. It means logging in an effort to make the entire woodland healthy.

When his team of loggers go in, they don’t necessarily take the best logs. They take what needs to be taken down and in an effort to get more sunlight into the woodlands, which means healthier trees.

If the process is done progressively over time, it will mean more money in the end for landowners and they will have a healthier forest.

Doing so, however, requires landowners who don’t want to cash out immediately and instead are willing to work to improve their forests.

Dunkle said landowners can make more money in the long run by using sustainable forestry than by taking all of the good trees out at once.

“It leaves you with a healthy forest and that will in turn mean better logs,” said Dunkle.
Logs with horses. In the woods, the business uses six teams of draft horses to skid logs, instead of heavy equipment, because the horses do less damage.

“It’s important that the trees we leave behind are healthy. The horses help us do that,” said Dunkle.

In 2004, the Firths created a charitable land trust organization called the Foundation for Sustainable Forests that works with individual landowners for long-term conservation of working forests, often through outright land purchases or permanent conservation easements.

The foundation works to protect forested land while supporting rural communities as well. It partners with other land trusts and conservation organizations to provide forest preservation.

The Firths employ about 20 people and have 35 subcontractors working for them. They work in nine counties in Pennsylvania, including Erie, Crawford, Mercer, Venango, Mckean, Warren, Potter, Elk and Forest counties. They also work in southwest New York including Chautauqua, Cattaraugus, Allegany and Erie counties.

Dunkle said they haven’t worked in Ohio, but would be willing to work with landowners there.
The sawmill produces 7 million board feet of lumber a year. They sell approximately one and half million logs per year.

Firth Maple Products also produce ash logs for baseball bats and poplar and beech wood for baskets.
They also produce beech and maple logs that are made into wooden dowels, guitar necks and skateboards. 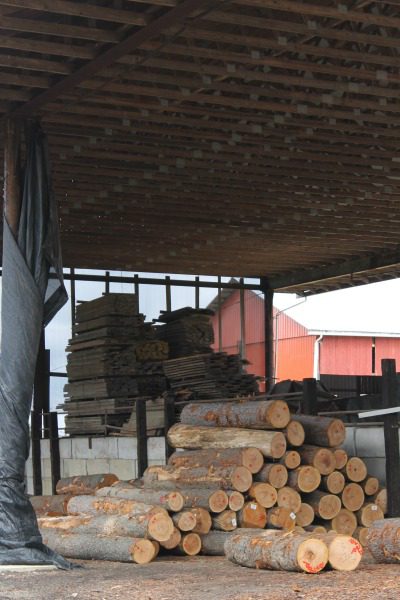 Other logs are turned into cherry tabletops or ash tool handles and axes.
Dunkle said it isn’t uncommon for the sawmill to produce logs of white oak, which will eventually be turned into wine barrels.

The Firths also use a steam pan, a furnace that creates steam and boils the syrup faster. The pressurized steam results in less burning, which means the syrup doesn’t turn dark and results in a higher grade of syrup.

Once the syrup is made, it is placed in drums to await delivery to a packing house in New Hampshire. 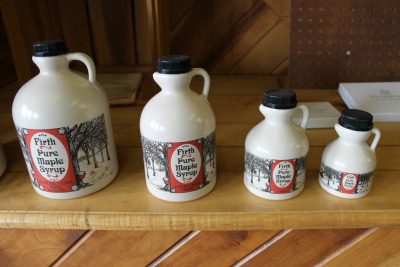 Some of the syrup is sold through a mail order system. Another portion of the product is sold to be used in maple candy or maple walnut topping.

Being in the woods was something Firth loved, and he knew his path would lead him toward working outside. He just didn’t realize it would lead to a lifetime job in the woods.