WOOSTER, Ohio — Ground moisture remained plentiful to excessive through the last full week of June, with most of northeastern Ohio and western Pennsylvania several inches above normal rainfall for the month.

Most of Ohio and western Pa. received 5 to 10 inches for June, or between 125-200 percent of normal rainfall, according to the National Weather Service. 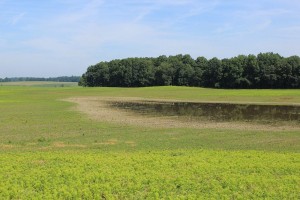 The heavy rains caused flooding in several low-lying fields, and in some fields that normally don’t flood.

The soil moisture will also affect humidity and temperatures, according to Jim Noel, a hydrologist with the National Weather Service in Ohio.

Amid the weather woes, the grain market dropped with the release of the USDA’s June 30 acreage and stocks reports. Read more from grain merchandiser Marlin Clark.

He expects the first half of July will have above-normal temperatures, with humid conditions. The humidity will keep maximum temperatures in check with most highs below 95, and it will also keep low temperatures up in the 65-75 degree range.

One of the hardest hit places the fourth week of June was Holmes County, where flood waters remained in fields through the week.

Lora Howell, executive director for the Holmes County Farm Service Agency, said the two-day rainfall in her county ranged from 4.5 inches to about 6 inches near the village of Nashville.

While the county has some areas that frequently flood, this unusual event made a mess for most of the county, plugging bridges with trees and sediment, and leaving some fields completely flooded and killing the new crop.

“They’re good farmers  — there’s just nothing you can you can do when you get that much rain coming,” she said.
She said it’s still being decided whether there will be any kind of disaster assistance for the flood damage.

To date, only about 40 percent of farmers have reported their planting and crop progress to her office, compared to the normal of about 70 percent . This means they still have a lot of planting and re-planting to do, she said. They’re also struggling to make hay.

“Basically, what they’ve got time to do now is just try to take care of their livestock and keep water out of their own basements,” she said.

On the upside, Howell said farmers in Holmes County are diversified enough that they can usually change their cropping system —  if they must. For example, instead of making dry hay — almost impossible recently — many have turned to making silage.

Gary Mellor, Emergency Management Agency director for Holmes County, said there were no injuries reported, although several people did have to evacuate their homes for a few hours, due to interior flooding. The good thing, he said, is that the worst flooding receded about as soon as it came.

Haymaking continues to be a struggle across Ohio and western Pa., with farmers unable to get enough drying days in a row.
“It’s really difficult to harvest under these conditions,” said Mark Sulc, OSU Extension forages specialist. “They just haven’t had a long enough break to get it dry.”

Instead of baling dry hay, many farmers are turning to haylage and silage, but even that has been difficult.

Sulc said one thing that might work for some farmers is to mow the hay in narrow windrows and then later scatter it across the field with a tedder.

Usually, the recommendation is to mow in wide windrows, he said, but some may find success with the narrower windrow, because it creates more open space between rows, and allows the ground more exposure to dry.

He said farmers might also want to consider mowing slightly higher than normal, because leaving more stubble helps keep the hay off the ground and may help it dry sooner. Cutting the hay higher will inevitably reduce yields, but may be better in the long run.

As for farmers who have hay down, Sulc said it’s important to get it off as soon as possible, to prevent damage to the next crop. It doesn’t take long before old hay begins to mold and damage the new crop, and old hay can also attract weeds.

“It’s better to deal with the rained-on hay and get it off the field,” he said, even if the last resort is to chop the old hay and blow it back onto the field.

Bruce Anderson, extension forage specialist with the University of Nebraska, advises farmers to “bale it, chop it — even blow it back on the ground as mulch.”

Anderson said that driving over hay fields repeatedly will cause damage, but that if it means getting rid of old hay, the damage may be worth the gain.

“There isn’t much of a positive payback managing rained-on hay, but to ignore it is even more expensive,” he said in a news release.

Usually, the first week of July sees a fair amount of wheat harvest in Ohio — but not this year.

As far as quality, he’s seeing a “fairly decent looking crop in terms of grain fill.”

He said the crop could still produce a sizeable yield, if farmers get some dry conditions over the next couple weeks.

If the moisture continues, it will increase the risk of a diminished crop and the chances for disease and mycotoxin, as well as sprouting.

So far, he’s not seeing much of an issue with head scab and said the wheat looks healthy. From the road, he said a lot of wheat fields look ready to harvest, but once you walk into them a distance, there are still a lot of green stems, and soft grains.

Co-Alliance Cooperative to offer $30,000 in scholarships