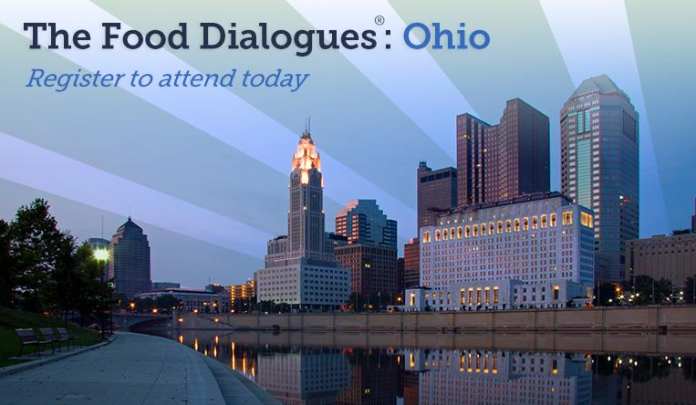 2:00 The final panel discussion has ended at The Food Dialogues: Ohio event in Columbus, Ohio. Thanks for reading Farm and Dairy’s live coverage of the event.

1:48 The question was asked, “Are GMOs and biotechnology required for sustainability today?” Marty Matlock’s answer was a resounding, “Yes.”

RT @russfarm Dr. Marty – #GMOs are necessary to be sustainable. I am not afraid of science. #FoodD

Joe Logan, director of agricultural programs, Ohio Environmental Council, disagreed. He argues that consumers have a right to know what they’re buying. He then said that GMOs are a tool than can be used, but are not necessary for a sustainable future.

Sustainability and the world

1:41: Lisa Hamler-Fugitt, Ohio Food Banks Association, brought up an interesting point. Many third world countries are becoming second world and first world. The citizens of those countries are interested in eating what The United States eats. That could have an impact on the sustainability of our own food system.

1:36: Regarding equipment, Ben Sippel chimed in again with, “There’s a reality that comes along with a mortgage. Equipment is a good thing.” The audience laughed, but for many farms, large equipment is a necessity.

1:31: A question was asked from the audience about good mentorship programs for young farmers. Ben Sippel, Ohio farmer, addressed the question with a bit of frustration. He said there’s good programs, and not so good programs. One of the largest problems, he said, is “Many young farmer mentorship programs are done on farms where they’re not making a living farming.” When crop insurance was mentioned, Sippel mentioned that federally subsidized crop insurance is making it difficult for young farmers to get a foothold.

1:21: When the topic of subsistence was mentioned, Marty Matlock, professor, Department of Biological and Agricultural Engineering, University of Arkansas, commented,  “Living off of the land means that you’re hungry, or dying, most of the time. We need prosperity agriculture.”

Many on the panel agreed:

1:15: Riley asked the question, “What makes our system unsustainable?” When Lisa Hamler-Fuggit, Executive Director, Ohio Food Bank Association, answered the question, she advocated for keeping nutrition policies in the farm bill. She also commented that specialty crop producers need to continue to have access to capital, giving them the ability to grow those crops.

Panel 2- Sustainability and your food

Remember, you can follow along with the discussion on Twitter with #FoodD or watch live video of the panel discussion http://ofbf.ag/fooddialogues.

12:54: The panel discussion on sustainability should begin shortly. Lunch is wrapping up, the panelists are in place and the auditorium is slowly filling with audience members.

12:00: The final question posed by Riley was, “Where do you (the panelists) go for the best information on your food?” The panelists are advocating scientific research, talking with farmers and educating themselves on GMOs and food safety.

11:59:The panelists are discussing the possible consequences of using GMO crops for feeding livestock. Dr. McDonald said that animals have been fed GMO feed for 20-30 years. If there were ill-effects of using GMOs, it would’ve been apparent by now.

"Trust me, if I think I have a problem I look for an answer. The best evidence I have is what I see on my farm" Armstrong #FoodD

Ohio grain farmer: the best evidence is what I see on my farm. #FoodD

11:30: The conversation lit up when Doug Billman, an organic dairy farmer, asked the question, “If GMOs aren’t an issue, why are you afraid to label GMO crops?” He addressed the question across the panel to Allen Armstrong. 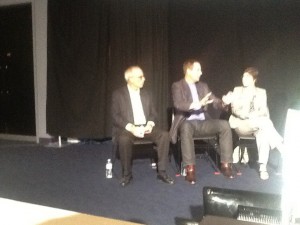 Dr. Ruth McDonald, registered dietician and professor of food science and human nutrition, Iowa State University, said it comes down to the cost of labeling GMOs. She also said that the food industry also has other, bigger, issues regarding food safety. Billman then added that the dairy industry, “got put under the microscope, yet the GMO sector doesn’t want the consumer to know what’s in their food.” Dr. Michel replied that all food has risks. He then added that GMO labeling may be misleading.

11:18: Allen Armstrong, Ohio grain farmer, commented that the idea that all food grown is GMO is wrong. He later added, “There’s no scientific facts that say what I raise is of harm to anyone.” The conversation then moved to Dr. Case Hoy Kellogg, Endowed Chair in Agricultural Ecosystem Management, OSU, who added that the reason why some consumers are worried is because there’s doubt that the precision is there.

11:15: The discussion about GMOs begins. Dr. Andrew Michel, assistant professor of entomology, The Ohio State University, started by saying, “Virtually all crops we have today are genetically modified.” We went on to say that through one way, or another, we’ve made fruits, and vegetables different over time.

11:05: Joel Riley, morning host, 610 WTVN, gives a short introduction for the live audience and the audience online. He also cracked a joke about having, “a face for radio.” It appears to be a full-house here at COSI in Columbus, Ohio.

The panelists for the Food Dialogues: Ohio are getting ready. The first discussion is on #GMOs : http://t.co/PJEHsAqHll #foodD

Farm and Dairy’s tech whiz, Will Flannigan, is traveling to Columbus, Ohio, to cover The Food Dialogues: Ohio. The Food Dialogues: Ohio, in collaboration with the Ohio Soybean Council and Ohio Farm Bureau Federation, places experts, representing a variety of perspectives, on panels to discuss food production, farming technologies and the environment.

The second panel discussion will focus on sustainability. How sustainable is our food system, and what effects does it have on our environment and economy?

See our coverage of the Food Dialogues: Chicago

The Food Dialogues will stream live at http://ofbf.ag/fooddialogues starting at 11 a.m. Submit your questions at www.fooddialogues.com/Ohio If you’d like to follow the discussion on Twitter, follow @USFRA or join the conversation with the hashtag #FoodD. (Updates will be time stamped. Updates will begin at the top of this page, once the event begins.)