COLUMBUS — The Ohio Beef Expo has come a long way since it was started 27 years ago. There are more cattle and people, dozens of new shows and exhibits, as well as some new buildings.

And, perhaps most important — there’s a lot more water.

Ginger Natolis, who was one of two Friend of the Expo recipients at this year’s event, said “everything” about the Expo is better than when it started, but especially the utilities. She remembers when water outlets were so scarce, exhibitors had to attach a hose inside the women’s restroom and run water back out.

She recalled one instance when someone actually took a good-size heifer into one of the restrooms to wash her off — a risky thing to do, Natolis said.

Today, on any day of the three-day Expo, it’s common to see dozens of people hosing off their cattle or running water so the cattle have something to drink. 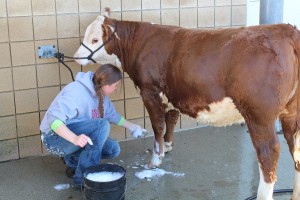 And it’s not just water that has improved — so have the lights and electric.

“Now, it’s beautifully lit,” Natolis said. “Every year there’s improvement and it all goes to the credit of the Ohio Cattlemen’s Association that works very close with the Ohio Expo (Center).”

Many exhibitors still bring generators just in case, and so they can have power in remote areas, but the electrical outlets and voltage are much better.

Natolis spoke to the crowd March 15, before the start of the Shorthorn breed sale. She operates Monarch Oak Farm, along with farm partner Calvin Huck.

“She’s a fount of knowledge,” said Sherie Clark, the American Murray Grey Association president. “I pick her brain all the time.”

Natolis, who is 85, is in the process of retiring from breeding cattle, but she still showed some cattle this year. She had the champion cow/calf pair as well as the reserve champion bull.

The other friend award went to Sally Puzacke of New Philadelphia.

Puzacke and her husband, Jay, operate the Saltwell Western Store booth, which represents the store they own in New Philadelphia.

The idea for the booth came when their son started bringing cattle to the Ohio Beef Expo, and the Puzacke family realized there was nothing like their store at the Expo. Since then, their booth has grown significantly.

In 2011, Sally and Jay decided they wanted to do something to give back to their customers, so they began the Saltwell Expo Scholarship, funded by a percentage of their sales generated through the official line of Beef Expo clothing. The scholarship is $1,000 and is given once a year at Expo.

Like Natolis, Puzacke has seen tremendous growth in the event.

“On Saturday, you can’t get through the aisleway in the trade show,” she said, adding that the diversity of the event has grown, as well.

Puzacke has served on the BEST committee over the years, where she is billed as an innovator, a thinker, and a strong leader.

In addition to cattle shows and breed sales, the trade show featured 116 vendors from 16 states — and everything from fencing supply to livestock trailers and farm machinery.

“There’s a lot of different farmers here, so we want to have (all that we can) for our livestock people,” he said.

Those farmers included everyone from hobby farmers, to large-scale farmers looking to buy or sell breeding stock.

A popular and growing attraction is the Genetic Pathway — where breeders bring and sell bull semen.

Tim Heckman, of Midwest Genetics in Bradford, Ill., has exhibited bull genetics at the Expo for eight years. He said the event has as strong a following as any cattle show he goes to and has good genetics.

And, the event is “versatile,” he said, meaning that a cattleman can buy a good bull, semen and a heifer — all at the same place and leave with the whole package.