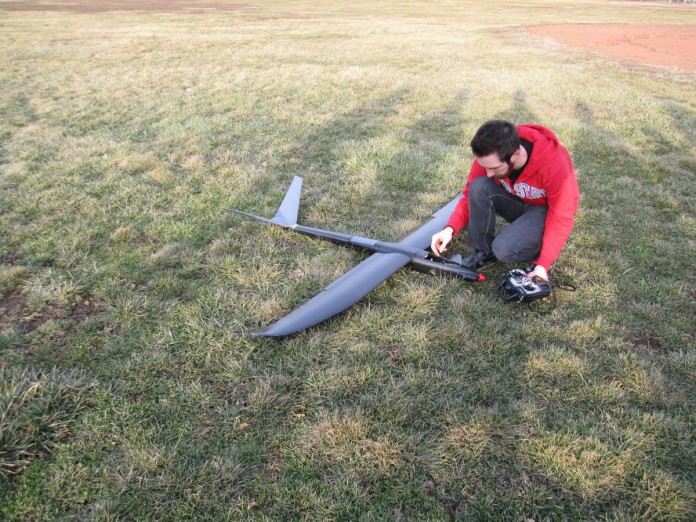 LONDON, Ohio – Hot air balloons and airplanes waving banners won’t be the only thing in the sky at the 2013 Farm Science Review. The trade show will feature a new kind of technology rarely been seen in the sky: unmanned aircraft systems, or drones.

Matt McCrink, a Ph.D. student in the Aerospace Engineering Department at The Ohio State University and research assistant to Dr. Jim Gregory at the Aeronautic and Astronautics Research Laboratory in Columbus, said while the technology is still in its infancy, it has the potential to have wide-ranging benefits for farmers.

Drones, or unmanned aerial vehicles, are military aircraft currently being repurposed for everyday use, especially within the field of precision agriculture. The hope is that drones will aid producers in monitoring crop health through the development of aerial imagery.

What does a futurist think about drones in agriculture?

McCrink said drones will be able to provide better images more often, which will allow farmers to make better decisions.

Using unmanned aircrafts could save money because it would reduce human labor, because no one would have to spend the time in the aircraft taking the pictures. Robots will be able to do the work and more often than a human would be able to.

“The real benefit to farmers in the future is the frequency of use available,” said McCrink.

He said by sending the drones into the air farmers will be able to keep an eye on weeds and precipitation needs in a field. In addition, the UAVs will also be able to provide local, site-specific data, including crop scouting and geo-referencing to allow growers to monitor pesticide dispersion and fertilizer usage, and to monitor crop health factors, including soil moisture.

McCrink said more research is needed to will at efficient ways to maximize the potential of aircrafts. He said it is very possible that drones will either serve or be owned by farmers in the next 20 years.

“Our goal in the agriculture industry is to be a source of better decisions for farmers,” said McCrink.

The one stumbling block is federal regulation. McCrink said there is little research into drones because of Federal Aviation Administration policies that do not allow companies to complete a lot of research on drones.

Currently, the FAA does not allow UAVs to operate in national airspace. However, the FAA is allowing special certifications for universities and other public institutions to test whether or not UAVS can safely be integrated into national airspace.

McCrink said the data gathered in these pilot programs will be used in the development of regulations and commercialization of drone technology, which could impact the cost of crop production.

According to a March 2013 report by the Association for Unmanned Vehicle Systems International, the use of UAVs has the potential to generate $82 billion in economic activity between 2015 and 2025. The majority of the increased economic activity would be in agriculture, the Virginia-based trade organization said in its report.

In Ohio, that increased activity will translate into 2,700 new jobs by 2025 and generate $2.1 billion in development, the report said.

Currently, a battle is waging between states for the designation of test sites. According to the Association for Unmanned Aerial Systems International, at least 16 states have presented their credentials to the drone industry and the federal government in an effort to be designated a test site because of the boom in jobs it could make.

The jobs created around an FAA test site could be over 20,000. Nationally, at least 70,000 jobs will be created in the first three years of drone integration to the national airspace, according to AUVSI.

Farm Science Review visitors will be able to see daily demonstrations of a UAV, which will offer an up-close look at the technology in live action.

It will also be the first time a farm show has offered live views of UAVs.

The Review is among a list of organizations nationwide that have been granted a special waiver or certificate of authorization by the FAA to demonstrate the UAVs during the show.