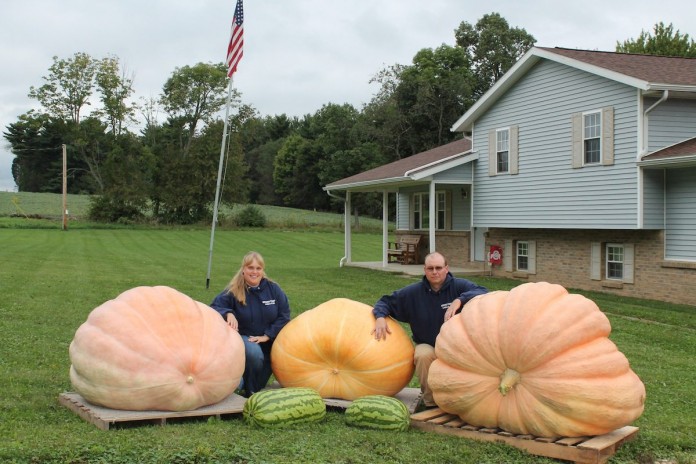 LAKEVILLE, Ohio — At produce displays and contests, nothing stands out quite like giant pumpkins. Their bulky orange flesh is usually waist-high or higher, and easily dwarfs the peppers, cucumers, the squash and everything else.

This past week, I had the chance to talk to a local giant pumpkin grower, who along with her husband, Andy, has put together a time-consuming hobby that they both enjoy.

Lauren Mosher, who is an elementary school teacher in the West Holmes school district, said she and Andy spend 1-3 hours each evening caring for their giant pumpkins — known as Dill’s Atlantic Giants.

The growing season begins indoors, where they plant the seeds in the spring, and transport them into the garden in June. They oversee the pollination of the plants, making sure they maintain the correct genetic line they want, and spend part of each evening doing things like watering, weeding, removing the suckers (secondary sprouts), and burying vines, which promotes additional root growth.

From the time of pollination, the pumpkins grow about 65 days, and consume a hefty amount of water and nutrients. The Moshers supply about 50 gallons of water to each plant, each evening.

They also keep close watch of the soil fertility, adding things like gypsum, lime, triple-19 fertilizer, epsom salt and borax, or as Lauren puts it, pretty much “everything and anything.”

I remember a couple years where I tried growing giant pumpkins myself.

Only one of those years did I produce anything worth harvesting, and it was only a little more than knee-high. I spent most of my time pulling weeds and trying to keep those long, growthy vines from being run over with the lawnmower.

The work has paid off for the Moshers, though, as they’ve had the largest pumpkin at the Wayne County Fair for the last two years.

And, they’ve achieved other things, like bragging rights, including over a neighbor, who got the Moshers started in pumpkins as a friendly competition.

“We got into growing these giant pumpkins and watermelons because of our neighbor, who also grows them,” Lauren said. “We have a friendly competition going between him and us, and every week we have Sunday evening visits to ‘size up’ our competition.”

This year, the Moshers recorded sizes of 855.5 pounds, 566 pounds, and the largest, at 1,189 pounds. They started with four plants, but one pulled off the vine at just 26 days old. Lauren said usually only a couple of their plants produce, because they are highly susceptible to disease.

At harvest, they have to be especially careful how they lift the pumpkins and transport them to the show. They use a skidloader and a harness to the strap the pumpkin in, and place a skid beneath it as soon as it’s off the ground.

The main thing is “you can’t go very fast,” Lauren said, or you’ll ruin the pumpkin.

In addition to competing with the neighbor, Lauren admitted that she also competes with her husband, to a degree.

“Usually one year out of orneriness, I will take one plant and do everything with it, and see if I can beat him,” she said.

But in all seriousness, the project is mutual and one that they enjoy.

Lauren said her favorite part is “seeing the kids’ faces and seeing the kids crawl all over them”  at the fairs. In addition to Wayne County, they also display at the Loudonville Street Fair, in Ashland County, and are considering a few other shows, as they improve their skills and the size of their pumpkins.

Lauren said her dad, Dean Slates, who is a retired OSU Extension educator in Holmes County, has mostly left the project to her and Andy. He did help plow the garden, and once helped diagnose a disease issue, but other than that, the project has been the Moshers’.

Lauren said she and Andy “hope to some day beat the state record, but we need a lot better luck in order to do that.”

Speaking of records, the largest pumpkin at this year’s Circleville Pumpkin Show in Circleville, Ohio, weighed 1,964 pounds and was grown by Bob and Jo Liggett.

That’s a few hundred pounds short of the world record, which was set by Beni Meir, of Switzerland, with a pumpkin weighing 2,323 pounds.

In 2009, Canton couple, Nick and Christy Harp, made the news with a 1,725 pumpkin, which at the time was the world record.