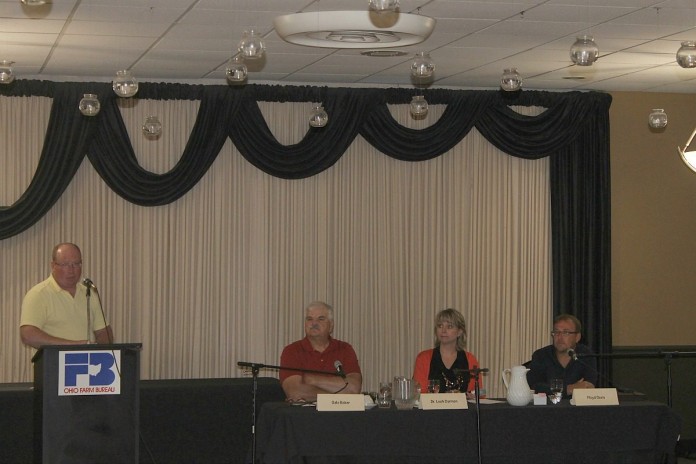 WARREN, Ohio – Farmers, lawmakers and concerned citizens gathered in Trumbull County May 15 to learn about genetically modified organisms and how they could impact the food supply.

A panel consisting of Leah Dorman, senior director of animal and food policy at the Ohio Farm Bureau Federation as well as a farmer and veterinarian, Floyd Davis, a vegetable producer an owner of Red Basket Farm in Kinsman, and Dale Baker, a retired seed salesman, talked about the controversy surrounding genetically modified organisms.

Baker said genetically modified corn and soybeans are necessary in order to produce the best crop at a good price. He added that the goal is to feed the world and that goal is going to get more difficult in the coming years as the world’s population grows and farmland diminishes.

Baker also went to explain to the group that there are 100,000 genes in a corn plant. He said only one gene has been changed to include the BT gene, which is commonly referred to as genetically modified.

Dorman said she witnessed first-hand the benefits of GMO when the drought hit her northwest Ohio farm in 2012. She said she and her husband had some panic moments but in the end, they were able to produce a crop and it was possible because of GMO corn, due to the drought resistance gene the GMO products have in them.

Meanwhile, Davis said there are very few genetically modified vegetables being produced. He said the seeds don’t have the genetic modifications. However, he said while he does follow organic practices in his vegetable production, he is not organically certified. Instead, Davis believes in developing the soil and “leaving it in better shape than when you got it.”

He added it is more important for him to have his operation be sustainable than to be deemed an organic or non-organic operation.

Dorman agreed with Davis. She said that sustainability is important for the food supply and that is necessary in order for the world’s food supply to continue.

Dorman also talked about whether or not genetically modified corn and soybeans are safe for livestock.

She told the crowd at DiLucia’s Banquet Room in Warren that both have been tested and satisfied the regulation process at the USDA, Environmental Protection Agency and the Food and Drug Administration, and it has been declared safe.

She said every seed has gone through the FDA, which was a voluntary process and the FDA deemed that it is not nutritionally different from non-GMO corn and soybeans because it doesn’t change the end product.

After the panel shared their comments, the crowd had the chance to weigh in with their own questions.

One person asked if GMO corn and soybeans is safe, then why  is so much money being spent to fight legislation concerning labeling.

The panel summed it up with one word: Cost.

Dorman explained that if it’s just labels, the cost will be pretty low and that can be absorbed by the consumer.

However, when a farmer has to consider tracing the products and segregation on the farm between GMO and non-GMO corn and soybeans, the cost gets significant.

She said that if a farmer produces both non-GMO and GMO on his farm, then the cost of separate equipment such as wagons and separate grain bins have to be considered. In the end, it means more infrastructure and the costs would have to be passed on to consumer.

Baker said the cost of organic is already double the price of GMO.

He added that the costs to produce organic products are double and that means the price food is double.

“The cost is going to be there regardless of what we do,” said Baker.

The problem is the cost would have to be passed onto the consumers and that would hit the lower class the hardest.

The panel shared that certified organic foods are labor intensive to produce, which means it has a higher cost and if a farmer has to have the third party verification service to show that is organic, that will mean additional costs.

“The farm has to pass it on,” said Dorman.

Davis asked the group, why the United States would want to force labeling. He feels the market will take care of itself. If someone wants organic, they can purchase it. If they want genetically modified then they can get it.

The group plans on continuing the learning series. They are planning another learning session June 28 about where the milk supply comes from.