HARRISBURG, Pa. — The Marchezak family of Twin Brook Farm in Bentleyville, Pa., has been a mainstay of the All-American Dairy Show for 50 years.

Tucked in the far southwestern corner of Pennsylvania, John and Dorothy Marchezak juggled the demands of a dairy operation and raising children, Patty, Jan and John E. They bottled their own milk, with a door-to-door delivery route, and sold meat from their Washington County farm.

But when John heard about a new national dairy show in Harrisburg, he didn’t hesitate to sign up. He packed up his cattle and family and headed for Harrisburg in 1964.

Twin Brook Farm is renowned for its Guernsey genetics, and since the first All-American, the Marchezak family has exhibited many winners. 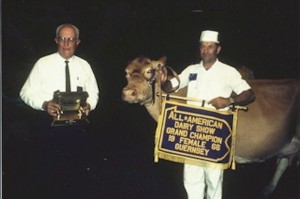 For the next 10 years, the family exhibited offspring from BK Posy, all from the same sire. All told, more than 40 Posy offspring have trod the All-American shavings.

Showing cattle is part of what it means to be a Marchezak. Now the third and fourth generations are carrying on the family tradition.

Justin exhibited reserve grand champion Guernsey in the junior dairy show in 1993. Jonathan was fourth senior in the All-American Youth Showmanship Contest in 1997, and Adam was the overall senior winner in 1999.

Grace won second, then first in the contest’s junior division in two consecutive years, and Patty’s granddaughter, Jocelynn, was the top junior Guernsey showman in her first year.

But Guernseys aren’t the only breed in the string anymore. Since their introduction to the family in 1970, Holsteins make the occasional appearance exhibited by family members.

Randi introduced Jerseys into the show string and won best bred & owned at the state 2001 junior dairy show with a Jersey and a Guernsey.

“It’s why I show up every day — to raise the calves and recognize and develop their potential.”

All the family members take an active role in preparing their animals for show, and the family has never hired an outside fitter.

“Jonathan has been our fitter since he was able to do toplines,” said Patty. “Everybody is responsible for body clipping and clipping the heads of their animals. My father [John] would not have had it any other way.”

“We would not have been able to show at the All-American for many of the past years if it weren’t for my husband John,” she said. “He has hauled the cattle in, gotten us settled, and headed back home in the same day.

“Other years he’s been my only helper except for show day.”

The only three years Patty and John missed were those when their sons were born during All-American week — Justin and Jonathan on Sept. 27 and Adam on Sept. 26.

The Marchezak family has been involved in nearly every aspect of the All-American. A family of judges, John [Marchezak] placed the All-American Milking Shorthorn Show in 1984, and Patty and John E. competed in the collegiate division of the Invitational Youth Dairy Judging Contest as part of the Penn State Dairy Judging Team.

Patty served as the promotion committee chair for the show’s 25th anniversary and on the show improvement committee. She was a Good Housekeeping judge, exhibited and sold items in the All-Dairy Antiques Show, offered consignments to the youth benefit auctions, helped initiate the show’s Image Award along with John Morris and Elsie Wolff, and organized the ever-popular white pants exchange for exhibitors.

For 49 years Twin Brook has been a class sponsor. A distributor for Lira Gold Health Products, John E. supports the show through the company, a long-time supporter.

The entire Marchezak family considers the All-American a gathering spot for friends and family.

“We get to see people we only see once a year,” said Patty. “Plus, we get to see some really great cows.”