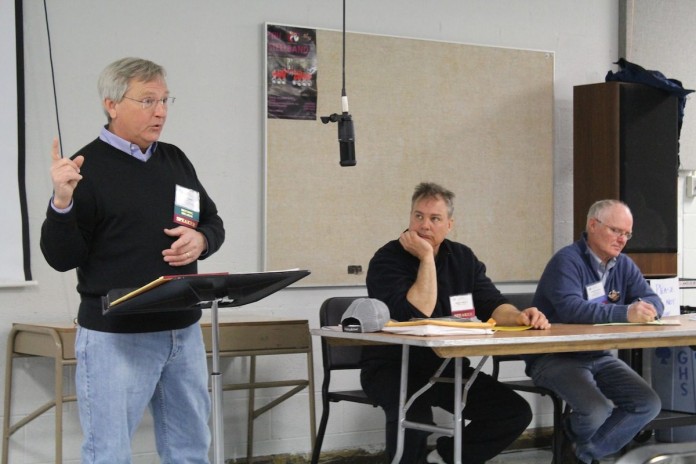 GRANVILLE, Ohio — Bemoaning the ways of “big agriculture” and many of the trade groups that represent it, Illinois writer and columnist Alan Guebert encouraged a return to affordable, sustainable agriculture during his keynote address Feb. 14 at a state meeting of organic and sustainable farmers.

“Twenty-fifteen is going to be a big year both for sustainable and a big year for unsustainable agriculture,” he told a crowd of about 1,100 people, at the Ohio Ecological Food and Farm Association annual conference, held at Granville schools.

On the “unsustainable” side, he expects farmers will continue to face steep financial burdens.

The only way such farmers will sustain their operations, he said, is with tax breaks and subsidies, including government-subsidized crop insurance.

“The way they farm won’t succeed and, in fact, on its own, it’s never going to succeed,” he said. ”Throughout American history, American agriculture, left to its own devices, has produced itself smack dab into poverty.”

Aside from the financial challenges, Guebert said modern farming practices are destroying fertile soil, which results in $400 billion in lost food production every year.

“American farmers and ranchers are going to have to change,” he said, noting that all generations of farmers have had to change in order to survive.

But some things don’t change, like the demand for good-tasting food that is fresh, safe and high quality, he said.

He recalled growing up on his family’s crop and dairy farm in southern Illinois, when most of their food came from within 10 miles of their home farm. The term “junk food” was unheard of, people were thinner and healthier, and there were more neighbors and neighborhood businesses.

Guebert said he and his rural neighbors were “foodies” long before the movement began.

“With almost perfect ignorance, we ate from farm-to-table,” he said, adding, “Our farm, to our table.”

He said some of the things “big ag” is promoting, like its claim of feeding the world and producing the safest food supply in the world, are myths.

He pointed to recent salmonella cases and foodborne illnesses, as proof.

Guebert said corporate agriculture tries to tell people what to think, when it should be informing them about the facts.

If left unchallenged, big ag’s message, would be to “sit down, eat and shut up,” according to Guebert.

Guebert has definitely been a challenger throughout his career, which has mostly centered around ag journalism and a syndicated column, called the Farm & Food File, which is carried by Farm and Dairy.

Many of his columns are critical of large farm organizations and government leaders, and commodity checkoffs, especially the National Cattlemen’s Beef Checkoff, which he faults for not doing a proper job of auditing its spending.

His brother, Richard Guebert, has taken a different approach to farming. Richard is president of the Illinois Farm Bureau and now serves on the national Farm Bureau board — organizations that Alan Guebert criticizes for promoting myths and misinformation.

Guebert said the kind of agriculture he expects to survive is that which is “sustainable,” betting against things like genetically modified organisms and certain soil amendments.

In a morning session, he moderated a panel discussion about a proposed organic checkoff program. The checkoff has been in the works for the past couple years, and the 2014 farm bill contains language that could move it forward.

DeBruin said he supports creating a checkoff because it would help promote and distinguish the organic brand.

Fernholz, who also holds a position with the University of Minnesota as organic research coordinator, said he’d rather see the work of a checkoff be done through a land grant college, with public tax money.

Fernholz said he’s “never seen what I would call a good story from checkoffs.”

As an organic farmer, he finds himself paying to checkoffs that already exist, but that don’t do research into organic practices.

“If I’m not getting organic research on those dollars, who’s getting it,” he asked.

One of the challenges to creating an organic checkoff, Fernholz said, is that organic producers can’t really claim it’s any better than conventional food.

“What are we going to promote?” he asked. “What promotion can you really say, other than ‘look for the organic label.’”

Fernholz said he’s in favor of “complete organic exemption” from all checkoffs, and more emphasis on public research.

But new funding, even for food research, can be a tough sell for taxpayers.

Guebert concluded the checkoff discussion by talking about the challenges of operating a checkoff and the responsibilities of its members.

“They’re (checkoffs) not hard to start, but they’re really hard to monitor,” he said.

A federally supported checkoff would have U.S. Department of Agriculture oversight, and certain budgeting and auditing requirements.

Guebert said organic producers still need more information, to “ensure that if this is what you want, it’s done in the manner that you want.”