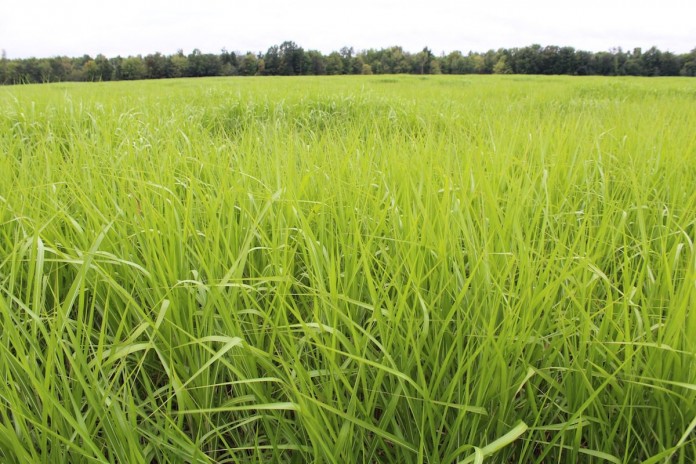 SALEM, Ohio — If you were to drive down a country road in Ashtabula County, or one of the adjacent counties in Pennsylvania, and see a 10-foot high grassy crop growing in the fields, you might wonder — what is that and what are they doing with it?

Turns out, several of the farmers in the same counties are wondering the same thing.

The crop, known as giant miscanthus, is a perennial that can grow for up to 20 years. It was planted in the region about three years ago, backed by $5.7 million from the U.S. Department of Agriculture’s Biomass Crop Assistance Program, in hopes that the crop would be used to produce cellulosic fuel and other biobased products.

How much liquid biofuel has been made from miscanthus so far?

The problem is complex. Atkinson described it as a “classic chicken or egg dilemma,” saying that the refineries need the supply of miscanthus, while at the same time, the farmers need assurance that if they grow the crop, there’s going to be a market.

That’s the challenge in Ohio now — the crop has been grown, and it’s ready to harvest, but there’s no biofuel plants around to process it.

Jon Griswold, CEO for Aloterra Energy, the company that is organizing the miscanthus farmers in the region, told Farm and Dairy in September of 2013 that he was “98 percent sure” that a processing facility would be built in Ashtabula or a surrounding county within the next 12 months, representing a $200 million investment.

It’s unclear where that project stands, and Griswold did not return calls seeking comment.

However, the company’s senior vice president of corporate development, Scott Coye-Huhn, said Aloterra is poised to make some big announcements in the spring, about a new facility and new product the company plans to make from miscanthus.

He cannot yet announce the product, for proprietary reasons.

“It’s real,” Coye-Huhn said. “I think people are just working out the kinks.”

Aloterra currently operates a facility in Andover, manufacturing high-end absorbents, which can be used as livestock bedding or in other applications that require absorbent material.

Coye-Huhn said it’s likely the next facility will be built near the existing one.

The Ohio-Pennsylvania region of the Biomass Crop Assistance Program, or BCAP, has roughly 100 farmer participants. Coye-Huhn said some are frustrated because they expected the crop to be sold into the biofuels industry, while others are enthusiastic about the use in other biobased products.

“You get the whole spectrum of responses,” he said.

Part of the farmers’ concerns stems from the fact that different uses carry different levels of compensation.

Producers were eligible for up to 75 percent reimbursement on the cost to establish the crop, in addition to $40-$100 per acre in rent payments from FSA, and a matching payment of up to $45 per ton.

Producers are also subject to payment reductions in years of harvest. This was meant to steer producers toward self-supported markets, once the crop was established.

If the crop is used for something other than conversion to heat, power, or biobased products, or advanced biofuels, the payment reduction is 100 percent.

It’s unclear whether the products being made from Ohio’s miscanthus will qualify as a bioproduct, or which category of compensation some may receive.

Kelly Novak, BCAP manager, said some of the products being made sound like biobased products to her, but the final decision is made by others within USDA, and based on the product application submitted to the USDA bioproducts staff.

She said she can understand farmers who are disappointed because the crop is not being used for fuel.

“It’s an honest to goodness complaint, but there’s the reality that this is a hard industry (to build),” she said.

Hard, in part, because so many things have changed since the miscanthus funding was authorized under the 2008 farm bill.

Over the last six years, the country has seen unprecedented growth in the shale gas industry, a scale-back of federal and state renewable energy mandates, and within the last month, oil prices have fallen to below $50 a barrel.

“Today, we’re seeing a change in the economics and the markets,” Atkinson said. “We’re seeing gas prices come down (and) we’re seeing discussions on (changing) the renewable fuel standard.”

All of these things make creating fuel from miscanthus less competitive.

However, Atkinson and Novak said they are optimistic about the other products miscanthus can be used for.

“The real theme of this program is to provide an incentive to grow more things in rural America that people can buy,” Atkinson said. “Although ideally we would like to see these crops be used for liquid biofuels — if it’s investing in more crop options for the farmer that results in more products that people want to buy, that is ultimately good for the rural economy.”

Aloterra and its partners have about 16,200 acres of miscanthus, in Ohio, Pennsylvania and some Midwestern states.

The Ohio-Pennsylvania region includes a little under 4,000 acres.

Coye-Huhn said part of the reason the $200 million processing facility hasn’t been built is the “uncertainty” of Congress and the future of energy policy.

“How are you supposed to plan a $200 million facility when you have that kind of uncertainty,” he said.

Coye-Huhn added that the economics of miscanthus “do make sense in the long run” and that he’s confident the product will find its way into the marketplace.

The farmers and taxpayers who are taking part in the project hope he’s right.

Howard Seavey, who farms near Conneaut, Ohio, doesn’t grow miscanthus on his farm, but the neighbors all do. He said he’s taking a wait-and-see approach, and that things could work out.

Gary Marcy, a grain farmer in Pierpont Township, Ashtabula County, said some of the miscanthus in his area has been baled and covered, and now sits at the edge of the field.

“If it works out, I’m happy for everyone involved,” he said. “But if it doesn’t, that’s going to be hard to kill off.”

And expensive. Any landowner who is considering killing off the crop or removing it will need to pay close attention to their contracts.

Novak said there were typically two kinds of contracts with growers, one with the FSA and the individual landowners that specified federal funding the farmer could get, and another contract with the landowner and Aloterra, which covered the rhizomes and market arrangements.

Aloterra acted as the region’s “local sponsor” for farmers to participate in BCAP, and provided the rhizomes to establish the crop.

The crop itself can grow for 20 years, while the miscanthus BCAP is a five-year program.

Farmers who end their contract early could be subject to penalties and be made to pay for losses.

But Aloterra and project supporters hope that won’t be necessary.

Steve Maurer, Ohio’s FSA executive director, said he’s seen some of the non-fuel products being made from miscanthus, including paper products, and said “it’s pretty impressive.”

He said a fuel use might still come along, but until it does, “it’s good that they still have an alternative, market-value use for it.”

Coye-Huhn said the crop is bringing new jobs to the county and he expects more to come, when the next processing plant is built.

“I think this was everything we were hoping it would be,” he said. “It never shows up quite the way you would think it would.”