The study was only of individuals self-reported health claims, and did not include clinical examinations of the participants’ physical health nor any environmental tests.

The most commonly cited concern was stress, which 76 percent of participants said they’d experienced.

Among the leading causes of stress reported by the participants were feelings of being taken advantage of, having their concerns and complaints ignored, and being denied information or misled.

“Many of these stressors can be addressed immediately by the gas drilling industry and by government,” said senior author Bernard Goldstein, M.D., emeritus professor and former dean of Pitt Public Health. 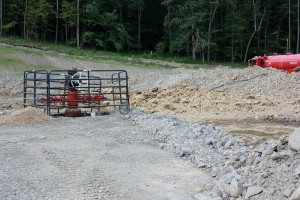 “Scientific literature shows that if people do not trust companies doing work in their communities, or believe that the government is misleading them, there is a heightened perception of risk,” said Goldstein, also a member of the National Academies’ committees to investigate shale gas drilling in the U.S. and Canada.

“Community disruption and psychosocial stress have been well-documented as a result of environmental issues like oil spills and superfund sites. A strong response by the Pennsylvania Department of Health to address concerns about health impacts of hydrofracturing could reduce observed stress and resulting symptoms,” he said.

From May through October 2010, members of Pitt Public Health’s Center for Healthy Environments and Communities conducted in-depth interviews with 33 people concerned about fracking in their communities. Three- quarters of the residents resided in five of the seven most heavily drilled counties in Pennsylvania.

Follow-up interviews were conducted from January through April 2012 and included 20 of the initial 33 participants. The remainder could not be reached or declined to participate.

“Our study shows that perceptions of health may be affected by fracking regardless of whether this health impact is due to direct exposure to chemical and physical agents resulting from drilling or to the psychosocial stressors of living near drilling activity,” said lead author Kyle Ferrar, a doctoral student at Pitt Public Health.

“Comprehensive epidemiological studies of all potential adverse consequences of fracking need to be performed, and they should include a close look at psychosocial symptoms, including stress, which cause very real health complications.”