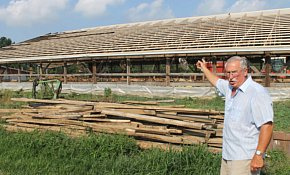 Scroll to the bottom for a slide show of wind damage to farms in northern Wayne County. This barn, owned by Tom Noyes and his family, lost its roof during a Friday afternoon storm.

WOOSTER, Ohio — After a week of scorching temperatures in the mid 90s and with heat indexes of 100 degrees or more, Ohio and Pennsylvania are in store for a slightly cooler week.

The National Weather Service Forecast for Columbus shows just three days in the 90s, compared to the previous week, when nearly every day exceeded the 90 degree mark.

Northwest Ohio appears to be on a similar trend, with highs Wednesday through Friday of 92-94 degrees.

In Pittsburgh, the high temperature will stay in the mid to upper 80s and break into the 90s on Thursday and Friday.

Crop and livestock farmers in both states saw a wide range of effects from last week’s heat wave, mostly negative.

Peter Thomison, Ohio State University corn scientist, is concerned heat stress and reduced yield potential will be the outcome of this hot and dry period, if it does not end soon.

Much of the corn was planted in wet soils, which means root systems haven’t developed as well as they would have in drier conditions, according to an OSU news release. Compounded with hot, dry conditions, the plants are more susceptible to heat stress.

“If we’re looking at temperatures above 90 degrees sustained over a week, combined with soil moisture deficits, the impact on corn could be devastating,”

Thomison said. “These high temperatures alone may not jeopardize pollination, but in conjunction with water stress they can result in significant kernel abortion after pollination, during early grain fill. So, the ovules may get pollinated, but if we have inadequate moisture, the kernels will just abort and we’ll see tip dieback.”

Rainfall has varied extensively, even within the same county.

“There are parts of the state, areas in Brown County for example, that got 8 inches recently, while other areas in the same county didn’t get a drop,” Thomison said. “In a lot of the northwestern counties that needed rain, some areas got an inch and others didn’t get any.”

The corn planted in mid-May is at or near tasseling now, while corn planted after Memorial day is anywhere from stages V10 to V14. Some corn planted later in June may only be at the V6 stage.

The weather also is affecting livestock farmers, who are spending additional time keeping their animals cool, while noting decreases in production and performance.

“Up until last Thursday or so forth, milk (production) has held up very well,” he said. He hasn’t looked lately, but expects the numbers will be down now, because of the prolonged heat and the added stress of storm damage.

“They (cows) spent most of the weekend in the barn with only half a roof,” he said.

Noyes figures he got about three inches of rain over the weekend, enough to make the grass green, but he said his pastures and grazing schedule is still behind because of the record wet spring.

The good news is he has plenty of well water routed to the cows, and as a breed, “Jerseys take the heat fairly well,” he said.

John Grimes, OSU Extension Beef Coordinator, wrote about the adverse effects of heat in the July 20 edition of the Ohio Beef Cattle Letter.

The most important nutrient right now, he said, is water. A typical 1,200 pound spring calving cow on a hot day will require about 216 pounds of water a day, or 27 gallons.

Grimes told Farm and Dairy that established water sources like well and municipalities tend to be more reliable. But if it’s a creek or a stream, farmers need to be paying attention.

“If it’s more of your natural sources, you really got to monitor it to make sure they have a plentiful supply,” he said.

He sees a better week in store for much of the area, but not by much.

“This week looks to be a tick better than last week,” he said. However, “we’re not out of this by any means.”

In addition to an ample supply of water, he recommends plenty of shade. To be effective, the shaded area needs to be 20-40 square feet per animal and the height of the shade structure should be greater than eight feet tall, to allow for sufficient air movement.

As for feeding, he said the heat generated from the feed cattle eat typically peaks four to six hours later. For this reason, he advises farmers to feed cattle after daytime high temperatures have been reached, to establish better feed intake patterns.

Lastly, farmers should avoid working cattle during peak heat hours and to manage pests like flies, which typically cause the cattle to crowd together as they’re bitten, reducing their cooling potential.