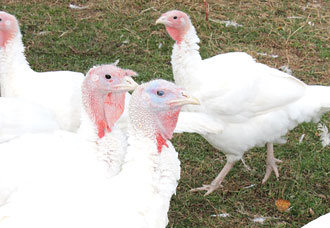 ROBERTSVILLE, Ohio — A Minerva High School senior rushes in from cross country practice, tells his parents hello and rushes out to do his chores.

That’s an average fall afternoon after school for Bill Brown and his brother, Wylie, who plays football for the high school.

Brown started a business producing pastured-based chickens as his FFA project this year, and it has taken him in a direction he didn’t see coming.

Brown always wanted to be a farmer of some sort. For a couple of years, he and Wylie raised sweet corn, but just as the clientele was built, the owner of the rented land died, leaving them without a place to plant their corn.

He considered raising cattle, but was worried about the initial investment being too high. And then the idea of the pastured raised poultry hit him, and he realized it was a safer investment.

Brown said he got the idea to sell pastured raised chickens after selling them for a family acquaintance.

Last year, he said he had trouble selling 100 chickens, but this year after growing them himself and knowing what is going into his birds and telling customers what he does for them, he is not having that same problem.

The Alliance Farm Market offered free space to both the Marlington and Minerva FFA chapters and he took them up on the offer. He did have to pay the mobile license, which is required by the state of Ohio.

Brown sells whole birds and cut-ups, boneless chicken breasts and chicken bratwurst. He also provides it freezer wrapped, so it’s ready to go when the customer arrives home. He is looking at different products to offer customers next year.

“I had someone tell me they had been looking for someone to do poultry for years. So it was kind of neat.”

Brown started the business with the support of his parents and the help of Wylie, who helps take care of chores if Brown’s schedule won’t let him.

Currently, Brown is raising 13 pastured fed turkeys and 270 chickens. It takes between seven and eight weeks to raise a flock. The aim is to have chickens finish out at between 5 and 7 pounds and the turkeys between 20 and 25 pounds.

As with any FFA project, the enterprise has been a learning experience.

Brown started with 100 turkeys and in one night lost 60 percent of the herd to a mink.

“I learned you need to have them better protected than that. I know not to do that again,” said Brown.

He acknowledged he had heard of mink horror stories, but didn’t think it could happen.

The herd has also shrunk due to an attack from a cat and sickness due to the weather.

Brown’s flock of chickens started at 300 and he has lost 30, mostly due to the sudden changes in the weather.

For predator protection, the chickens do go into the barn at night.

Brown provides a 22 percent all-natural starter to the birds when they first arrive at his parent’s farm. Then, at between days 15-21, he starts them on a non-medicated finisher. He has both feeds manufactured to his own specifications, and that includes no antibiotics.

After the birds are grown, the next step is processing. Brown has his chickens processed in Baltic, Ohio, at Pleasant Valley Poultry. The ground chicken is processed at Baltic Country Meats.

Brown loads them into cages and drives them to the processor, often before school, and then goes back to pick them up after school.

He plans to expand his business once he graduates from high school, and wants to transfer one field on the farm to a poultry area.

Brown wants to build a mobile chicken coop that will be pulled around the property each day so that the chickens graze and are safe at night.

He said he is looking forward to some time to recuperate after Thanksgiving, however, his business isn’t going to end after this last batch of chickens and turkeys are processed. He is already being questioned about the availability of winter inventory.

Besides his business, Brown is president of the Minerva FFA chapter, runs cross country, is student council president and student body president. He is also a member of the National Honor Society.

(Reporter Kristy Foster welcomes feedback by phone at 800-837-3419 or by e-mail at kfoster@farmanddairy.com. You can also follow her on Twitter at http://twitter.com/fosterk96.)