AMES, Iowa – Matthew Hill has identified countless bones found by farmers, fishermen, rock hounds and heavy equipment operators. Most of the remains turn out to be deer, bison, horse or cow bones, or simply odd looking rocks. But some discoveries turn out to be highly unusual, as was the case with an antler from an extinct Ice Age animal known as a stag-moose or elk-moose.

“At first, I was puzzled. I knew it did not belong to a white-tailed deer, elk or caribou. It looked sort of like a moose antler, but not quite – it was different,” Hill said. “I suspected it might be stag-moose, so I sent a picture to a colleague at the Illinois State Museum to compare it with specimens in their collections. He confirmed my suspicion.” 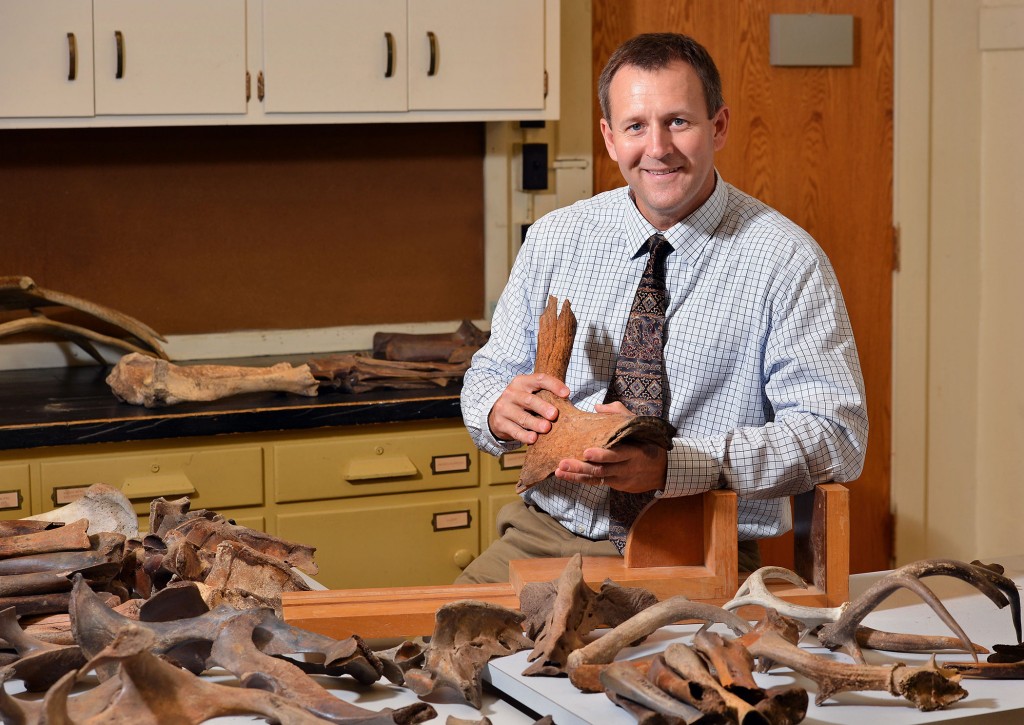 The discovery inspired Hill, an associate professor of anthropology at Iowa State University, to learn more about when the animal was in Iowa and search for additional specimens.

Specifically, he wanted to determine the age of the antler and two other specimens he located. So he carefully cut a small cube from each specimen and sent them off to an Arizona lab for radiocarbon dating.

The results far exceeded Hill’s expectations. Turns out, one of the samples is more than 30,000 years old, making it the oldest specimen of a stag-moose ever recorded in North America. The results of the radiocarbon dating, which would not have been possible without a grant from the College of Liberal Arts and Sciences, are now fueling Hill’s curiosity and new research.

“It means that these animals were here before the glaciers covered central Iowa, and that they returned for a short time after the glaciers retreated as well,” Hill said. “Still, we don’t know a whole lot about the ecology of these animals. When they appeared, their numbers on the landscape, the cause of their demise, and what other animals they were living with side-by-side? There are just a whole lot of questions and this will be a great opportunity to learn more.” 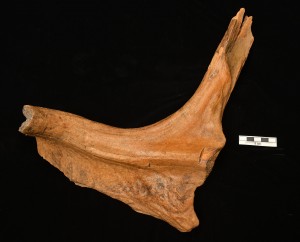 Such discoveries often start with a phone call. Hill fields dozens of calls each year from people across the state with questions for him about a bone or a skull. In fact, the stag-moose antler that sparked Hill’s interest was discovered by an Ames man, who was searching the South Skunk River near Ada Hayden Park for remains. Radiocarbon dating determined the antler to be 13,400-13,700 years old.

The 30,000-year-old specimen was found in the 1970s by a gravel pit operator working near Jester Park in Polk County. It was donated to the State Historical Museum in Des Moines, where it is on display.

The third specimen, located near Parkersburg, is part of a personal collection. Hill said the animal lived 12,600 to 12,800 years ago, and tied a specimen from north-central Wisconsin for the youngest record of the stag-moose.

What he finds most exciting is that the age of the Parkersburg specimen suggests the first people to occupy Iowa – so-called Clovis hunters – may have preyed on the beast.

Drought conditions this summer and last generated even more calls as the dry river and creek beds exposed a treasure chest of specimens dislodged during earlier floods. Hill’s research depends, in part, on what others find that he can analyze and study.

“Recent weather patterns have been very conducive to finding specimens. Flooding removed vegetation from cut banks and sand bars, and drought has lowered water levels significantly,” Hill said. “There are a lot of people in Iowa who canoe, fish and spend time on sandbars, and they find things. I can’t walk every sandbar in the state, but a lot of people do. The farmers, the fishermen, the canoers are the eyes and ears in the field for people like myself.”

An email from a South Dakota farmer led to one of Hill’s largest and most diverse bone collections. Boxes containing everything from leg bones and teeth to skulls and antlers cover nearly every open space in his lab and fill a small storage closet.

Hill said the farmer collected the 1,600-plus specimens, over an eight-month period following the 2011 flood. He found them in a sandbar deposited in his field along the Missouri River. While none of the bones belong to the extinct stag-moose, the collection does include several extinct mammal and turtle remains that are millions of years old.

Hill and his students will use the items to better understand the formation of bone accumulations and how the animals lived and died. But it’s not just Hill’s students who are eager to learn more about the bones.

“The people making these discoveries want to know about their specimens, too, as opposed to just putting them on their mantel,” Hill said. “Animals die on the landscape, they get buried, and rivers meander around and erode and rebury remains. It’s the formation of the fossil record and that’s what we’re interested in.”

Hill said the stag-moose is a part of the Cervalces genus, which lived during the Ice Age, and was a rather unusual-looking creature.

“It had the body of a moose, a face like an elk and the males had an antler rack that’s like neither. The antlers are goofy, the shaft goes straight out from the side of the head for a ways, and then develops into two or three palms that sprout multiple tines. No two are alike,” Hill said. “I think they’re just cool.”

Now with these dates, Hill can gain a better understanding of the time period when the stag-moose was in Iowa.