WOOSTER, Ohio — One of the largest John Deere dealerships in northeast Ohio, and with a history dating back to 1937, has entered into a plan to sell its assets to Georgia-based Ag-Pro.

Ag-Pro has also purchased a second, and yet unconfirmed, Ohio John Deere dealership. Phone calls to Ag-Pro’s headquarters were not returned.

Shearer Equipment announced its intent to sell in a letter to customers Jan. 17, and in a Facebook post dated Jan. 18. The target date for the sale is Jan. 30.

According to the letter from Shearer Equipment, Shearer formed a new ownership team 14 years ago, with the goal of expanding the company’s footprint in northeast Ohio, and several additional locations were purchased.

Tara Sheldon, spokesperson and marketing manager for Shearer, said the sale should provide a bright future for employees and John Deere customers in the area.

“We were looking for growth and ways we can offer better pricing and new opportunities for our customers,” she said. “It wasn’t a quick decision by any means.”

Sheldon said she expects the new owners to meet with existing employees soon, but expects the same employees will continue with the company.

Shearer was started in 1937 by Clark Shearer and his son, Gerald Shearer, in Wooster, near the Wayne County Fairgrounds as an Oliver Dealer. In 1969, Shearer Farm Equipment was incorporated as Shearer Farm Implement Inc.

The John Deere location in Wooster has been located north of Wooster, along state Route 3, since 1989.

Ag-Pro Ohio acquired Ohio-based JD Equipment in an announcement made in December.

The acquisition of JD Equipment was Ag-Pro’s first expansion in the Midwest, and at the time, Ag-Pro had sales of over $800 million.

Ag-Pro has been aggressively adding dealerships and stores, and its stable of 71 locations is up from just 49 in October 2017. The company, which says it is the largest privately held John Deere dealer in the U.S., has primarily been focused in the South, with locations in Alabama, Florida, Georgia, South Carolina, and Texas.

(Below is the letter from Shearer Equipment, with the announcement.) 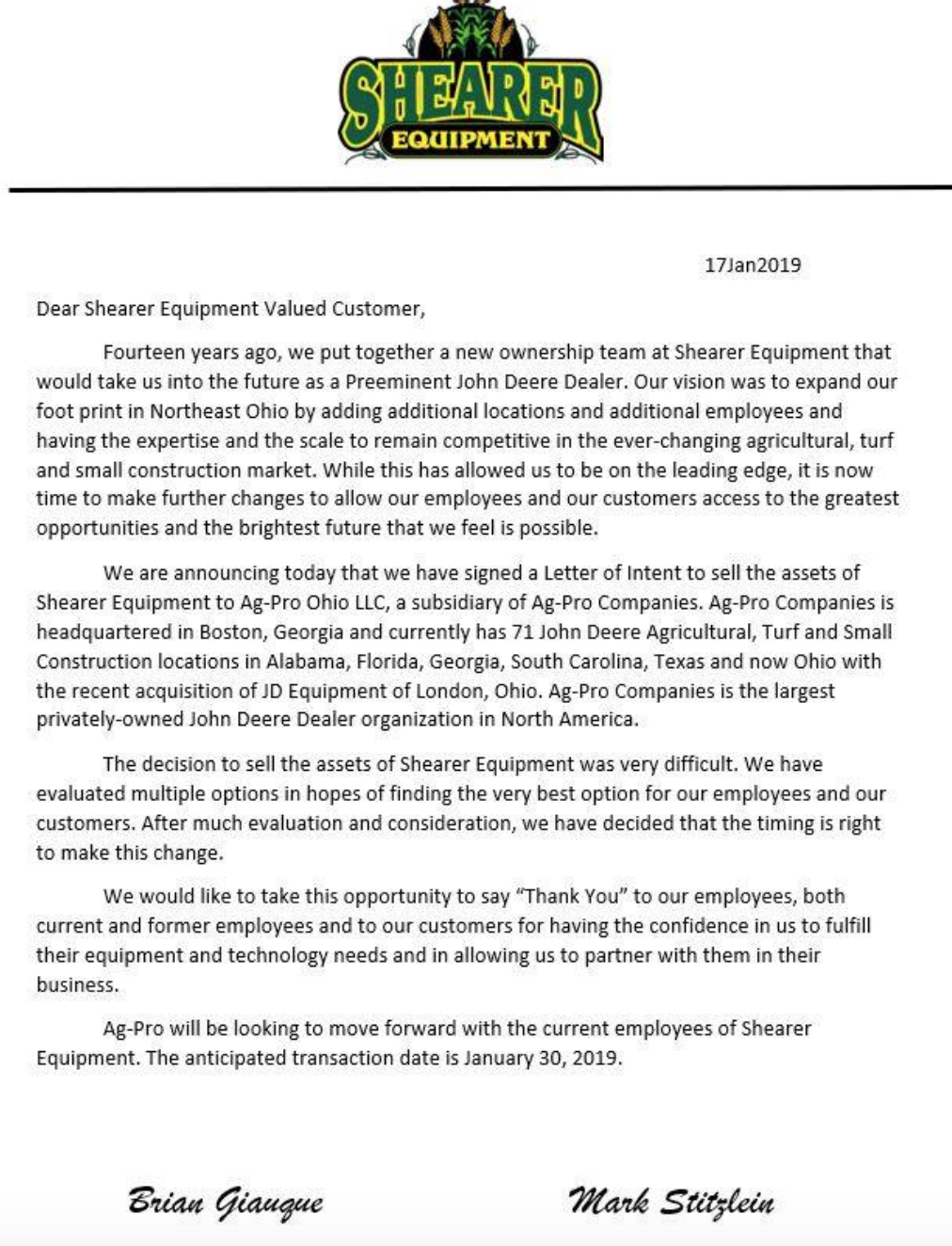