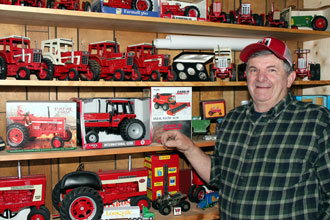 SALEM, Ohio — When Fred Hippely and his brothers were growing up on their Jersey dairy farm, each spring his dad would haul in a truckload of sand for a warm weather play area.

And that sand became a real farm for the seven boys’ toy tractors and implements.

“Our toys got worked hard in the summer,” Hippely said. “We moved them inside during the winter for our carpet farming.

“You can imagine the havoc caused to toy tractors by seven boys. We had great fun without giving Mom too much gray hair.”

Farm toys were far different a half-century ago.

The Hippely boys got toy tractors and equipment as gifts, but not many, and their father made a lot of toys for them from wood.

“Dad even customized a plastic Farmall tractor by replacing the rear axle with a longer version. He then made wooden wheels that he added on the rear,” Hippely recalls.

“So we had the first toy tractor in the neighborhood with duals.”

Story Continues Below Photos (click on photo to read identification)

A seed is planted

Hippely may not be a jack-of-all trades, but he is adept at many facets of agriculture.

He was a dairy farmer, but gave that up for crop farming, and he and his wife, Susan, farm about 150 acres of corn, soybeans and hay.

His career as a farm equipment salesman has spanned 30 years and he can tinker on most any farm tractor or implement.

But it was quite by chance that Hippely got into collecting farm tractor and equipment models.

He was 9, in his first year of 4-H. His 4-H adviser was employed at Salona Supply Company of Salem, a hardware store, a feed mill and a Farmall machinery dealer.

During a meeting at the adviser’s home, Hippely spied a Farmall model C on top of the refrigerator.

He asked if he could hold the small tractor, to see it up close.

The adviser, seeing Hippely’s interest in the Model C, told him that if he gave a demonstration at the next meeting, he would give Hippely that tractor.

“So I gave the demonstration at the next meeting, and that nifty Farmall was mine. That happened in the summer of 1952, the start of my collecting.”

While Hippely’s collection spans the gamut of equipment brands, he has emphasized the familiar red of Farmall, International and Case-IH.

“Most of my farming equipment has been that special color of red. And the majority of my farm machinery sales experience has been with that same familiar color. So quite naturally, my collection interest has pulled me in that same direction.”

His garage shelves, where the collection is displayed, has more than 450 farm tractors and implements, and a handful of pedal tractors, and more than 40 trucks of various kinds.

The toys are represented in 1:64, 1:32 and 1:16 scale, and as he matured as a collector, he’s added mostly precision and high detail models.

Hippely’s cache is colorful, with countless pieces, each with a special story, but he’s quick to point out special memories.
A 1:16 sand-cast John Deere Model A with the driver and solid rubber wheels and tires by Ertl was his very first toy.

And the 1:16 scale plastic Farmall model M by Product Miniature? “That is exactly like the one I played with, as my original has long since bit the dust.”

Wife Susan’s family farmed with Case tractors, so “I bought the 1:16 scale die-cast Case Model Case-O-Matic 830 by Ertl to keep harmony in the family,” Hippely said.

“We married before Case and International joined forces. I believe those companies saw how well our marriage worked out so they joined forces, as well.”

Hippely has a few custom pieces that were made locally.

One in particular is a custom Peterbilt truck with a liquid manure tank spreader. “Rick Burbick of Columbiana, Ohio made that gem for me.”

Hippely’s varied experience in farming, mechanical work, machinery sales and collecting has amassed a reservoir of knowledge that has carried over into collecting.

“It has been interesting to watch how the farm toys have evolved into refined collector models,” Hippely said. “Although I would love to have some of the wood toys my Dad built, I really like those of today with great detail.

“The manufacturers have come out with models that are very timely with new equipment, so it’s exciting to get those early on. I’ve seen custom and scratch-built models that are remarkable, but most have been a little pricey,” he added.

“I headed off to a show one day and Susan suggested that I had enough farm toys. When I got home, she asked how many toy tractors I had bought. I told her none, but I told her about the toys trucks I picked up.”

“Susan is probably right. I have a lot of farm toys, but how can I quit?”

He’s started looking around the Internet for special opportunities, and reads magazines like Toy Farmer to keep up-to-date on the latest toys.

“Farming has been in my family’s blood,” Hippely said. “The farm tractor and equipment models are a reminder of what we do.”

(Author Fred Hendricks owns SunShower Acres Ltd., of Bucyrus, Ohio, a dairy cattle consulting business. He is also an avid farm toy collector and freelance writer. He may be contacted by email: fwhendricks@gmail.com.)