EVANS CITY, Pa. — Marburger Farm Dairy is not just an outlet for the milk production from the Marburger family’s dairy cattle, but a market for farmers’ milk from several counties in western Pennsylvania.

Now, the fourth generation — son Craig and daughter Carrie Marburger-Roff — work with him to keep the milk processor running.

Marburger’s grandfather, A.C. Marburger, had been a dairy farmer all of his life. However, in 1938, an opportunity came along that changed the Marburger family farm history.

A.C. Marburger purchased Evans City Dairy after it went bankrupt, and changed the name to Marburger Farm Dairy. The dairy was able to process 20 gallons of milk a day.

In 1940, Marburger’s father, Martin, and two uncles started working with his grandfather. They kept the dairy small in the 1950s, but started growing in the 1960s.

Marburger said they had 10 tie stalls in 1950, but by the middle of the 1950s, the Marburgers were milking 60 head of cattle on their own farm.

By 1968, the farm doubled the size of the barn, and was up to milking 100 head. Then, in 1979, a fire broke out in the barn due to an electrical issue. The farm lost only a few cattle, but the barn burned to the ground.

The Marburgers decided then to build a freestall barn and began milking 100-110 Holstein cattle.

Today, the plant and dairy farm remain on land that has been in the Marburger family since the 1840s.

In 2000, the decision was made to build a new dairy plant, the first dairy built in western Pennsylvania in 50 years, the family says. The state-of-the-art facility was one of the first plants to be built using air valves and computers to process and operate the plant.

The dairy now produces milk for several large grocers, including some Wal-Mart stores, and their product reaches as far south as Florida. They service retail stores in Ohio, West Virginia and Pennsylvania, and also offer home delivery in a 20-mile radius.

There are 40 trucks on the road each day, delivering Marburger milk.

Marburger said not all of the milk purchased is used at the dairy. Some is resold to Titusville Dairy for ice cream and Fairview Cheese for the production of mozzarella and Swiss cheese.

Jim and Craig Marburger agree that higher milk prices is not necessarily a good thing.

While it may be good on the milk production end, the father and son team explained that it means smaller profit margins for the dairy processing enterprise, which, in turn, means no new equipment.

They also explained that it means making repairs to the existing equipment to process the milk and the trucks that deliver it.

Both agreed keeping the doors open in the dairy industry sometimes means making the difficult decisions no one wants to make.

“You have to tighten your belt to keep going,” said Jim Marburger.

Marburger said the most important thing for the dairy is to produce quality products the public wants.

The dairy produces chocolate, white (skim, 2 percent and whole) and buttermilk, and packages milk in quarts, half gallon and gallon sizes, for sale to grocery stores.

Marburger said school districts are one of the dairy’s customer segments. The dairy produces school-size milk drinks for the daily lunch programs in many districts. The milk produced for schools is the only milk placed in paper cartons.

But the plant is also known for its ice tea. It produces 18 flavors of ice tea, in more than 40,000 gallons during the summer. In addition, lemonade and orange juice are also bottled.

Marburger said the dairy starts each day with 15,000 gallons of skim milk, then, as the processing moves along, more fat is added in order to produce the whole, 2 or 1 percent milk.

He said the dairy is strict about processing milk according to Pennsylvania laws and following established food safety regulations.

The dairy keeps two years’ worth of records of all milk brought into the processing plant, including where it came from and what truck it was hauled in. In addition, like every processor, every truckload of milk gets tested for antibiotic residues before it gets unloaded.

After the milk is unloaded, it goes through the pasteurization process, which includes heating the milk up to 173 degrees, then in 18 seconds, the milk temperature is dropped to 36 degrees.

Marburger, Craig and Carrie all agree the process is not simple and there are no shortcuts, but a safe product ensures that dairy farmers have a place to sell their milk and the consumer gets the dairy products they need. 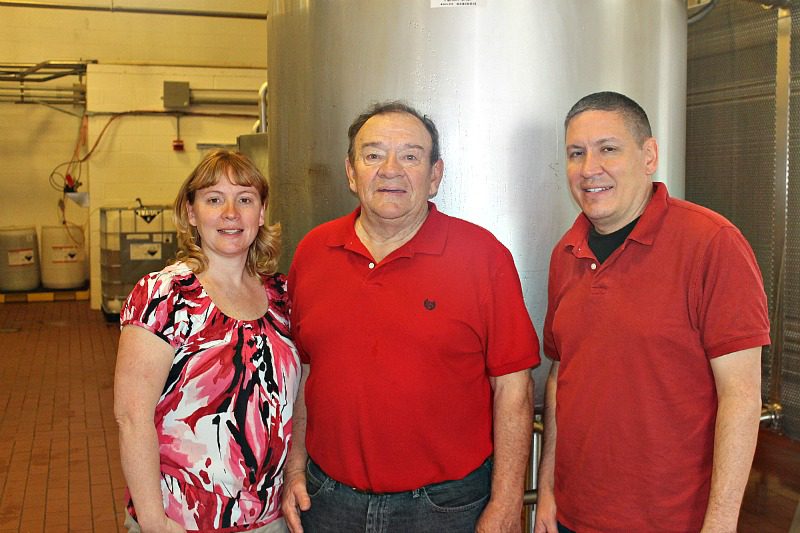