SALEM, Ohio — June was another slow month for the number of oil and gas well drilling permits issued by the Ohio Department of Natural Resources. In fact, only 34 permits were issued the entire month.

There are now 154 producing wells in Harrison County, and 143 wells have been drilled and await infrastructure so the products can reach the market. 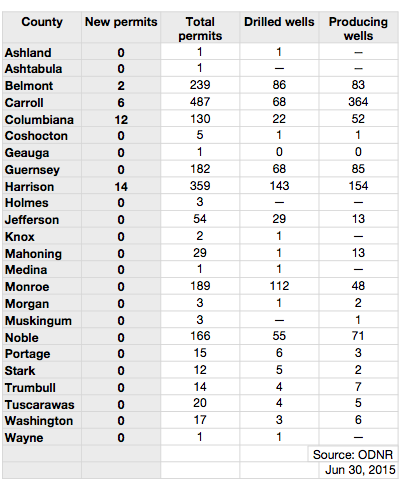 The Pennsylvania Department of Environmental Protection issued 192 permits for unconventional or shale wells in June.
So far there have been 1,116 shale permits issued in the Commonwealth since Jan. 1, 2015. The DEP reported there were 84 wells drilled during June, and 581 shale wells were drilled in 2015 so far.

Here is a breakdown of how many permits were issued in the Farm and Dairy circulation area.

The number of permits issued continues to soar in Bradford County where the Marcellus shale is credited with its beginning. The DEP issued 28 new permits during June and so far in 2015, the DEP has issued 169 permits there. There were four shale wells drilled during June and 24 wells drilled since January.

The DEP issued 25 permits for wells in Greene County during June. So far, 171 permits have been issued in 2015 for Greene County.
The DEP reported there were five wells drilled during June and 36 so far in 2015.

There were six permits issued last month for Beaver County sites. The DEP has issued a total of 23 permits since Jan. 1, 2015. One well was drilled during June and five shale wells have been drilled in the county since January.

The West Virginia Department of Environment Protection issued three permits during June for new wells in Brooke County. The permits were issued to the SWN Production Company for a site owned by the Trust of Gene Valentine.
The DEP issued five new permits in Marshall County during June. One permit was issued to Noble Energy, for land owned by Steve and Ed Ward. The remaining four permits were issued to Chevron Appalachia on land owned by Richard Woods, along with Nancy and Jane Wiley.

The DEP also issued two permits for drilling the Utica shale during June. The permits were issued to the Stone Energy Corporation for land owned by Ronald Gene Conley.

The DEP issued a total of seven new permits for Marcellus shale wells in Tyler County during June. Four permits were issued to the EQT Production Company for land owned by Donna J. Peter.