The 22 permits follow a month, November 2014, when no new permits were issued in Harrison County.

Harrison County also continued to gain ground in overall permits, with 317. Carroll County remains at the top of the total permit list with 455.

In addition to leading the state in overall permits, Carroll County also has the most producing wells in the state, 311, along with 82 wells in some phase of the drilling process, according to the ODNR. 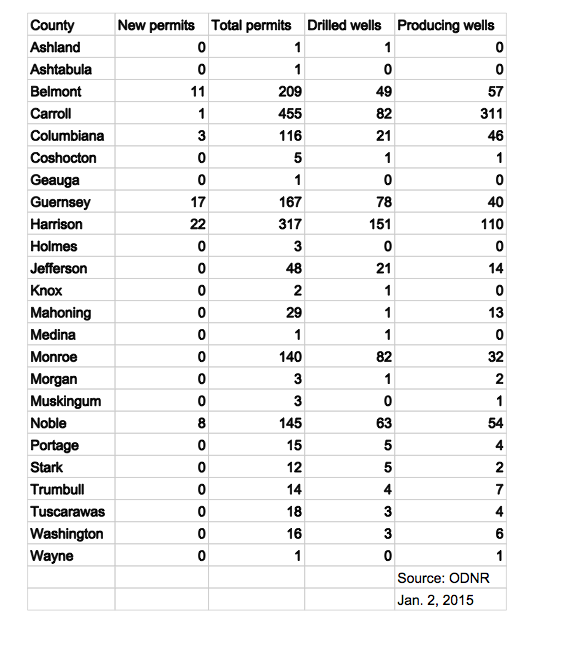 Of the 22 Harrison County permits, eight were issued to Chesapeake Exploration, nine to American Energy Utica, and five to Gulfport Energy Corporation.

Most of the activity was centered in North and Moorfield townships, with eight permits issued in each of the two townships. The remaining six new permits were issued in Nottingham Township.

Harrison County has 110 producing wells and 151 drilled wells — the highest number of drilled wells in the state — the ODNR reported.

There were 17 new permits issued in Guernsey County in December — seven in Oxford Township, six in Richland Township, three in Millwood Township and one in Wills Township.

The county issued six new permits to Carrizo Oil and Gas, seven to American Energy Utica, three to Chesapeake Exploration, and one to Eclipse Resources.

Guernsey County also had 78 drilled wells and 40 producing wells at the end of December.

There were 11 new permits issued in Belmont County in December, all in Goshen Township and all issued to Rice Drilling.

In Noble County, eight new permits were issued in Jefferson and Marion townships to Triad Hunter and Eclipse Resources.

Overall, the county had 145 drilled wells and 63 producing wells by month’s end.

Statewide, the ODNR has issued 1,743 permits for horizontal drilling in the Utica shale. As of Jan. 3, 1,290 wells have been drilled.

The ODNR has issued 44 permits for horizontal drilling in the Marcellus shale. There are 29 drilled Marcellus shale wells in Ohio. No permits were issued in December.

Washington County led the state for the most gas well permits issued in December with 39. Greene and Bradford counties followed closely behind, with 35 and 34, respectively.

In 2014, the Pennsylvania Department of Environmental Protection issued 3,189 gas and combination gas and oil well permits.

Bradford County led the state in permits issued, with 538 gas permits and one combination oil and gas permit, according to the DEP Office of Oil and Gas Management.

Western Pennsylvania continued to be a booming area, particularly in Washington County, where the 39 permits issued in December brought its 2014 gas well permit total to 410, with one permit for multiple well bore type also issued.

No permits were issued in Lawrence County in December. In 2014, the DEP issued 40 gas and 49 combination oil and gas permits in the county.

There were two permits issued in Beaver County in December and 43 total in 2014.

Allegheny County drillers received one permit in December and had 50 permits in 2014.

There were four permits issued in Westmoreland County in December and 21 in 2014.

The 15 permits issued by West Virginia Department of Environmental Protection in December was a significant drop from the 37 issued in November.

The majority of permits were again issued in the Marcellus shale. In the Utica shale, DEP issued one permit in Tyler County to Triad Hunter, on property owned by Velma Wells.

Among counties in the Farm and Dairy circulation area, Tyler County led the pack with eight permits in December.

Apart from the Utica shale permit issued to Triad Hunter, all permits were issued to Jay-Bee Oil and Gas on two properties. The properties are owned by Edsel Hoover Jr. and Arthur and Lois Bloom.

In Marshall County, there were five permits issued, all to Noble Energy, on two properties, one owned by Consol Mining Company and the other by CNX Gas Company.

Two permits were issued in Monongalia County, both to Northeast Natural Energy on two properties. The properties are owned by Ellen F. Campbell and Nehemiah and Patty A. Kassay.