Monroe County experienced an 11-permit hike, from six in January to a state-leading 17 new permits in February.

After ranking highest in the state in new permits in January with 12, only two new permits were issued in Columbiana County in February.

Both new permits were issued in Fairfield Township to Hilcorp Energy Company.

Producing wells in the county, however, increased from 49 to 52 in February. 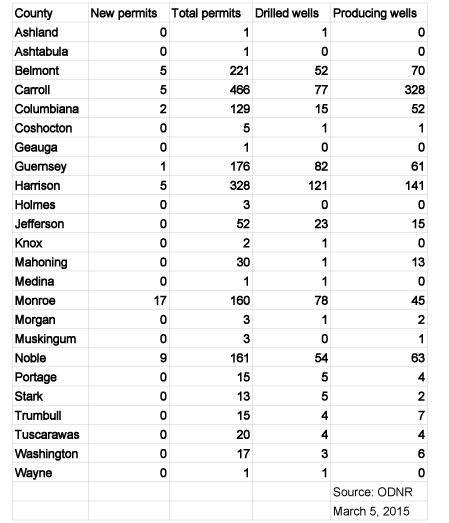 Following recent high of 22 new permits in December, the pace in Harrison County slowed in January, when only three new permits were issued. The county experienced a slight increase in new permitting in February, with five issued in North Township to Chesapeake Exploration.

Harrison County had the most wells in the state in some phase of the drilling process last month, with 121, and had the second highest number of producing wells in the Ohio behind Carroll County, with 141.

The ODNR has issued 44 permits for horizontal drilling in the Marcellus shale. There are 29 drilled Marcellus shale wells in Ohio. No permits were issued in February.

The Pennsylvania Department of Environmental Protection has issued 184 gas well permits thus far in 2015. In addition, the Pa. DEP reported 72 wells drilled in February, 13 of which are located in Venango County.

Elsewhere in the Farm and Dairy readership, permitting in Pennsylvania remained relatively light, as was the case in January. Sites in Butler County, however, received 14 permits, up from six issued in January.

After leading the state with its 30 gas well permits issued in January, Bradford County remained among the four leading Pennsylvania counties with its 19 permits issued in February. Only Washington, Greene, and Susquehanna County — with 23 — had a more active permitting month.

The most new permits in February, 14, were issued in Wetzel County — up from only five permits issued in January.

Elsewhere, Tyler County followed an 11-permit month in January with only two issued in February, both to Statoil USA Onshore on property owned by Roger D. and Ruth E. Spencer.

A single gas permit was issued in Ohio County, to SWN Production on property owned by Glen Didriksen.