SALEM, Ohio — The applications for new Utica shale wells appear to have slowed in August, as only 38 permits were issued statewide by the Ohio Department of Natural Resources.

According to the ODNR, there are now 32 wells in some sort of drilling phase and another 32 producing in Belmont County.

In Guernsey County, the ODNR issued 10 new permits in August. Eight of those permits were issued in Londonderry Township, where five permits went to Eclipse Resources, and three to American Energy Utica.
There are 53 wells drilled in Guernsey County and 33 producing wells. 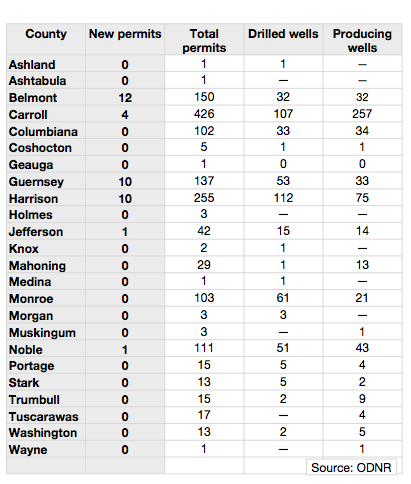 Four permits were issued in Perry Township, Carroll County, to Chesapeake Exploration.
There are now 257 producing wells in the county and 107 in some drilling phase.

In Jefferson County, a single permit was issued in Salem Township to Chesapeake Exploration. There are now 14 producing wells in Jefferson County and 15 drilled.
In Noble County, one permit was issued in Seneca Township to Antero Resources Corporation.
There are 43 producing wells in Noble County and 51 wells in some sort of drilling phase.

The permits from the Pennsylvania Department of Environmental Protection don’t appear to be slowing down. The DEP issued 230 new wells permits and 41 permits to drill deeper in unconventional gas wells in August.

The DEP issued 22 new permits for Washington County and four so that drillers can dig deeper in existing wells.

In Butler County, the DEP issued 24 new permits for new wells during the month of August.

So far in 2014, the DEP has issued permits for 1,969 unconventional wells across Pennsylvania. An additional 263 well permits to drill deeper have also been issued.
The geographic leaders for the number of permits issued include Bradford County with 419 permits; 297 permits in Greene County and 281 in Washington County.

In West Virginia, the Department of Environmental Protection issued 23 new permits during August.

In Monongalia County, five permits were issued for horizontal wells to be drilled by Northeast Natural Energy on land owned by the Coastal Forest Resources Company.

Co-Alliance Cooperative to offer $30,000 in scholarships