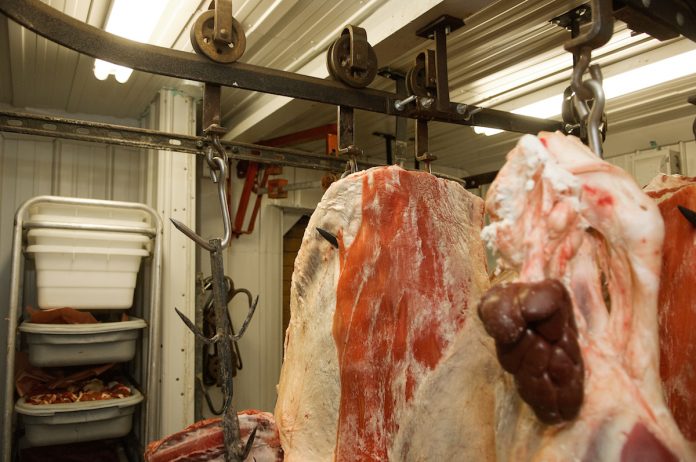 The packing industry is being hit hard by COVID-19, with meat processing facilities across the country slowing or suspending production because workers are sick or staying home.

JBS’s facility in Souderton, Pennsylvania was the first to scale back production due to several managers displaying flu-like symptoms. The company announced it would reduce production for two weeks starting March 30.

The beef production facility outside of Philadelphia touts itself as the largest beef facility east of Chicago. The facility, which employs more than 1,000 workers, is expected to return to normal operations April 14.

Cargill closed its processing plant in Hazelton, Pennsylvania, on April 7, saying it will reopen “as soon as it is safe to do so.” The facility makes case-ready ground beef, beef and pork products and employs 900 workers.

Most recently, a Smithfield Foods pork plant in Sioux Falls, South Dakota, announced April 9 that it would close for three days after more than 80 employees were found to have the coronavirus, the Star Tribune reported. That plant employs 3,700 people.

While COVID-19 is not known to be a food-borne pathogen, employees often work in close quarters in packing plants. So, while the food is safe, the employees may not be.

Workers at plants around the country have tested positive for COVID-19, including a JBS beef plant, in Grand Island, Nebraska and a Sanderson Farms poultry plant, in McComb, Mississippi.

Tyson Foods announced April 6 that it suspended production at a pork plant, in Columbus Junction, Iowa. More than two dozen cases of COVID-19 were confirmed in workers at the plant.

Tyson said hogs would be diverted to other pork plants to minimize the disruption. The company said production has been impacted recently by worker absenteeism and additional worker safety precautions.

Around 800 workers at a JBS packing plant, in Greeley, Colorado, called off work March 30, as part of a mass no-show after the company informed the plant that several employees tested positive for COVID-19, the Greeley Tribune reported.

“It’s a pretty big facility but if you’ve never been in the plant, it’s amazing how that process works. People work pretty much elbow to elbow. There’s no 6-feet distancing there,” United Food & Commercial Workers Local 7 president Kim Cordova told the Greeley Tribune.

The Iowa League of United Latin American Citizens’ voiced concerns about the unsafe working conditions at a JBS plant, in Marshalltown, Iowa, the Times Republican reported. A representative from the Latino advocacy groups filed a complaint with OSHA April 1, saying employees work shoulder to shoulder and do not have proper protective equipment.

How these closures and changes to production will impact the supply chain are yet to be seen.

Michael Nepveux, an economist with American Farm Bureau Federation, said in a Market Intel briefing that meat and poultry production in the U.S. is expected to increase this year. So, there’s no shortage of meat.

If plants spread out workers more or stagger shifts, that means they’re likely slowing down the production lines.

JBS said that as an essential service, the company is doing everything it can to promote a safe working environment, including staggering shifts and breaks, health screenings, enhanced sanitation efforts and bonus compensation for plant workers. Tyson said it has taken similar measures to protect employees.

People keep going back to the fire last summer at a Tyson Fresh Meats packing plant, in Holcomb, Kansas, to predict what disruptions from COVID-19 might look like in packing plants. That plant accounted for about 6% of the U.S. slaughter capacity.

Nepveux told Farm and Dairy you’re not likely to see a big plant go down for four months, like what happened in Kansas. Cattle prices dropped nationally after that.

“You’ll see what’s happening in the Pennsylvania plant. That’s more likely to be what we see around the country, smaller disruptions,” he said. “But to have five or six plants go down for two weeks at a time, that’s a lot of capacity for down time.”

There’s a lot more uncertainty from this slow burning crisis. The impact is likely to be localized, Nepveux said, impacting producers and markets in the region that plant draws from. Eventually, though, it will trickle down through the supply chain.

Michael Baker, a beef cattle extension specialist with Cornell University, said he’s heard of buyers and auction barn managers calling sellers, telling them to hang on to finished cattle if they can, after the news that JBS Souderton stopped taking new cattle. He said they’re a major buyer of finished cattle in the Northeast.

With the Tyson fire in Kansas, at least you knew where you stood, Nepveux said.

“We don’t know how long the healthcare crisis is going to continue into the future,” he said. “That’s a lot of concern and uncertainty.”