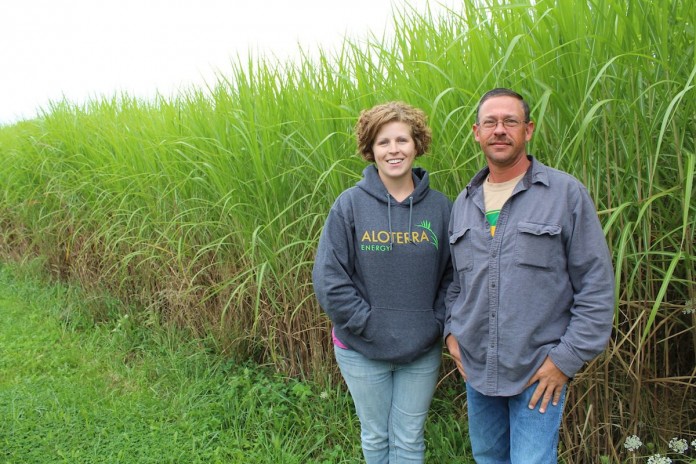 CONNEAUT, Ohio — The crop growing in the fields at Jon Griswold’s Ashtabula County farm — and in three dozen farms in neighboring counties — is sure to catch your eye.

At 10 feet tall and higher, Griswold’s “giant miscanthus” surpasses even the tallest of corn hybrids and the tallest of farmers. And its dense, wide-reaching foliage makes for a fort-like appearance from the roads.

But make no mistake — this aggressive-growing plant stays where Griswold and other farmers want it. As a sterile plant, it is non-invasive, although it will grow to fill in bare areas in fields where it is planted.Over the next 12 months, Griswold and some of the 38 farmers he has partnered with will begin their first major harvest of the crop.

What they’ll do with it depends on the market and how much they harvest. Griswold and his partners began growing miscanthus over the past two to three years, to develop a cellulosic ethanol source.

Griswold is CEO of Aloterra Energy (headquartered in The Woodlands,Texas) — an energy company with expertise in ethanol and biomass production. He has a background rich in farm cooperatives and the energy market — and is trying to extend his expertise to a new crop that could help farmers and the communities of northeast Ohio and northwest Pennsylvania.

Griswold and local farmers received about $5.7 million in grant money from the U.S. Department of Agriculture in 2011, to plant a biomass crop of giant miscanthus (Miscanthus x giganteus) as a renewable biomass feedstock.

The grant was part of the Biomass Crop Assistance Program (BCAP) authorized by the 2008 farm bill, and was one of four similar projects. Other biomass grants were awarded in Arkansas, and in Aurora, Mo., and Columbia, Mo.

Miscanthus is planted by digging and re-planting rhizomes — not seeds. Aloterra owns propagation farms in Kansas, and is a partner with MFA Biomass, which is growing miscanthus in the Missouri region.

Having planted the crop, Griswold and other farmers now find themselves at the other end of the spectrum: Harvest time.And for the farmers who have taken the risk to grow miscanthus, it’s taken some time to get to harvest.

In general, miscanthus requires at least two years of growth before it can be harvested, and three before it reaches its full tonnage value — about 12-15 tons per acre. The advantage, though, is that as a perennial, it grows back each year, and is usually productive for at least 16 years.N

When Griswold and area farmers planted miscanthus in 2011 and 2012, they were hoping to produce a source of cellulosic ethanol.

That is still the case, but Griswold, and his project manager, Courtney Spencer, say the technology for converting it to ethanol is not finished.

“We are probably within another year of having a process that is truly efficient,” Griswold said. “It’s the conversion that has to be adequate to make it work.”

Several firms are close, he said, and he expects it will happen within the next 12 months. Once the technology is developed, he expects investors to build a $200 million processing plant within Ashtabula County or one of the surrounding counties.

That process could take two to three additional years to complete, he said. While ethanol was the original goal, Aloterra is finding dozens of other uses for the product — which will likely happen first.

Because of the strong fiber potential of the stems, Aloterra believes it will be a popular product in manufacturing fiber-related products, including paper containers, food containers, livestock bedding and more.

Spencer said when she got involved with the project about three years ago, there were only three major uses being explored. Now, there’s nearly 40.

She’s confident the market will be there.

Griswold said the focus has been on creating the biomass supply so that processors and manufacturers will have a solid base to work with.“We do have serious lookers, but they’re trying to make sure that you have the supply ready and they’re looking at the economics and they’re looking at the technology,” he said. “It’s the technology that is the missing link so far.”

Aloterra handles the planting and harvesting of the miscanthus because it requires special equipment. They also handle the marketing, but the farms are independently owned.

Steve Lowe, a nearby farmer, allowed Aloterra to convert a hayfield to miscanthus in June of 2012. That field is already taller than Steve and he’s happy with the decision.

He said some farmers are worried that the crop will compete with grain and livestock crops, but he said it’s really not the case because usually, miscanthus is planted in marginal quality ground. Sometimes, it’s ground that was sitting fallow or unplanted.

“A lot of people think we’re taking away from the beans and the corn, and we’re not,” he said. “We’re reclaiming the land.”

Both universities have extensive information on their Extension websites.

David Marrison, OSU Extension educator in Ashtabula County, is assisting farmers who planted miscanthus and he helps oversee some test plots at the Ohio Agricultural Research and Development Center campus in Kingsville.

He said the quality of the crop ranges from “nice-looking fields” to “some that are average.”

But in the second year of growth, the average fields begin to look and do much better, he explained.

He said it’s encouraging to see the many uses the plant has — beyond just a fuel source.

“They’re doing some interesting things,” he said. “You name it, they’re looking at different options.”

By working together, the 38 farms have been able to share resources. Independently, Griswold said miscanthus would be too costly to grow — as much as $1,500 an acre. Aloterra has been able to reduce reduced the cost to $700 per acre and Griswold thinks they can go even lower, as the process becomes more efficient.

“I envision we will have a cooperative farm group of miscanthus growers,” he said. “That won’t happen until you start showing people what’s going on and the things that can be done. But that’s where this is going to lead, I think.”He is confident that a processing plant is on its way. Consultants for Aloterra are evaluating prospects, and he said it looks good.

“They will be here,” he said. “I’m 98 percent sure there will be something built in Ashtabula County or one of the surrounding counties within the next 12 months.”