POLAND, Ohio — Rick Molnar’s mother started selling sweet corn and strawberries at the family’s Springfield Township grain and beef farm on a card table under an Osage orange tree. It meant folks had to drive up the long lane, but it was the coolest place — for both seller and produce.

By the time Rick and his bride Jill were newlyweds in the early 1980s, they had replaced the card table with a little cart. It was still located by the tree, even though the tree had been struck by lightning, and a huge portion of the trunk lay on the ground.

Then, they added a roof over the cart, and, as more cars drove down the lane, the Molnars poured a pad under the cart to keep customers — and produce — out of the mud. The felled tree started to sprout anew, and by the time the cart overflowed into a bona fide farm market, a side wall of that market was notched out so that phoenix-like, sideways Osage orange still had room to grow.

But last year, the tree — and the outdated farm market — had to go.

Ninety percent of their produce is retailed through their market, and that was the problem: They just couldn’t grow or expand with their old 25-by-60 farm market.

When son Rick, now 25, graduated from the University of Akron and made the commitment to join the farm, the timing was right to build a new market.

But not just any pole building-type market. “I wanted a barn,” said Molnar.

And not just any barn, adds wife Jill. “He wanted a Wow! factor.”

Now, when customers drive down the farm’s long lane, they park in the shadow of a huge, 60-by-80 wooden barn custom designed by Sand Creek Post & Beam. The expansive, air-conditioned barn has an open concept interior, reaching 38 feet to the peak (well, 40 feet, if you count the top of the cupolas), 25,000 linear feet of interior wood siding crafted locally by Baird Brothers Fine Hardwood, and a second-story loft that rings the inside.

“Everyone just kind of comes in, looks up, and says, ‘Wow!’,” said Rick Molnar Jr.

“We try to raise really good quality fruits and vegetables,” the elder Molnar said, and the air conditioned climate helps maintain that quality while the produce is on the market displays.

Eighty-five to 90 percent of the produce sold at the market is raised at the farm, he said. What they don’t grow themselves — blueberries, melons or potatoes — they buy locally.

The market opened June 8, the start of their strawberry season, and will remain open through Halloween. The family farm and market employs 16 full- and part-time workers.

The Molnars have seen a 20 to 25 percent increase in sales since the new market opened, said Rick Molnar Jr. “And we probably should’ve planted more sweet corn this year!”

“We just couldn’t grow any more without a new building.”

In addition to his business degree, the younger Molnar also minored in culinary arts and hopes to expand the farm market down the road to include a cafe or catering or cooking demonstrations, so shoppers can learn new ways of cooking with the produce.

He would also like to link with other local food producers, and expand the product line with reach-in coolers where people could buy local meat or dairy products.

During the market’s open house Aug. 3, the family offered hayrides through their farm fields, and other “agritainment” activities may be in the works.

“There’s just so many options,” said Rick Jr., the fourth generation to farm at this Mahoning County location. “I won’t say no to anything.”

In February, he’ll marry his high school sweetheart, Virginia Landis, who is bringing a “dowry” of skills to the union, including a commercial food/baking license that has been put to good use creating a line of jams and jellies now in the market inventory.

“My Dad’s pretty open to a lot of ideas,” he added. “He sees as much potential as I do, and he wants to go forward.”

“We want to feel like a farm market, but we want to promote high quality.”

He’s participated and received certification in GAP, or Good Agricultural Practices, a quality assurance program for produce growers, and has instituted several practices with an eye toward food safety, including a switch to plastic bushel baskets and bins for harvest and transport of the produce, rather than the wood-slat type baskets or crates that can’t be sanitized.

Jill Molnar admits she was skeptical about the new construction (“I wanted them to wait.”), but said the open floor plan lets her take a more active role at the market.

Jill, who has multiple sclerosis, has been confined to a wheelchair for four years. She’s now able to get around the farm market and is usually there every day (and is the one who answers the phone).

It’s her handiwork in the colorful quilts that hang over the railing in the loft, signaling another change in the market inventory, that of country crafts and her quilts for sale in the second story.

It was also Jill who has tried to save the old Osage orange tree.

“The tree had to go, but I tried to do everything to start a new tree from that old one,” she said. 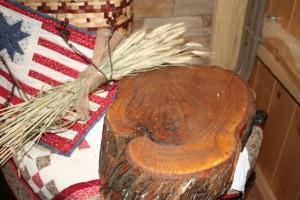 When they finally cut the tree down, Jill asked for two big branches, and had them saw a few cross-section slabs.

You’ll find one of those slabs, now gleaming with varnish, on display in a corner of the new farm market.

A farm market — a farm family — that won’t forget its roots.