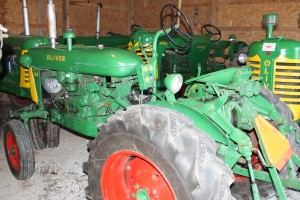 BEAVER FALLS, Pa. — It started out as a way to pass the time on the highway during his truck driving career. It ended as the ultimate hobby for T. Charles Baird, and induction into the National Farm Toy Hall of Fame Nov. 1.

Baird’s love of farm toys began as a child. His dad would get him one for his birthday and one for Christmas. Today, some models from his childhood are included in his collection: a Farmall M, John Deere A, a New Idea picker, International Harvester gravity wagon and a New Holland forage wagon.

Even when playing with toys ended, his love for the farm didn’t. He grew up working on a neighbor’s farm, and after high school graduation, he got a job at another farm, doing anything and everything that needed done.

It wasn’t long before he entered the U.S. Army and was stationed in Germany.

When he returned, he bought a semi-truck and started his own business. That’s what he would do for the next 40 years.
But during this time, he developed a way of passing time on the road.
He would see tractor and implement dealers along the highway and pull in, looking for a new addition to his model farm toy collection. 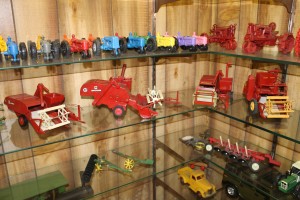 “I’d see a dealer, stop and buy a toy. It got to be a habit,” said Baird. He estimates he would stop every three or four days.

Baird would keep track of new tractors coming out and would time his stops to those dates. He collected not only new toys, but used toys as well, and would stop at garage sales and flea markets searching for the toy tractors and implements.

He also would purchase multiples of some, with the hope that he would be able to trade them for something he really wanted in the collection.

At one time, he had more than 1,100 pieces, but since retiring, he has sold most of his collection. He now has around 300 and he fills his basement with the toys and implements. 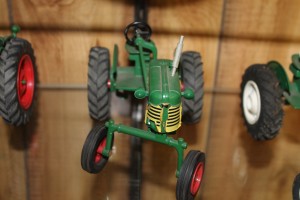 Today, Baird is concentrating on the newest line created in the toy tractor world, the precision line, which is more detailed than other models. Baird described it as the most lifelike type of model.

One color has continued to hold his attention for more than 30 years. Green has been Baird’s favorite color to collect, but not the brand you are suspecting.
The first new toy Baird bought himself was the Oliver Model 77.
“I’m an Oliver guy, but I’d collect any color,” Baird said.
But he doesn’t limit himself to toy tractors. Baird also used to restore antique tractors. In fact, he has the Oliver models 44, 55, 66, 77, 88 and 99.
“I’ve had all of them, so they mean the most to me,” said Baird.

Baird said he began collecting Olivers about 20 years ago because no one wanted them, meaning the price was low. Now that has changed.
The Oliver Super 99 and Oliver Super 44 mean the most to him. He said the 44 has a special meaning because there were only 150 produced and he has owned five of them.

“I like to buy junk and make them new again,” said Baird, as he talks about not only the Oliver collection but the four Internationals he owns as well. 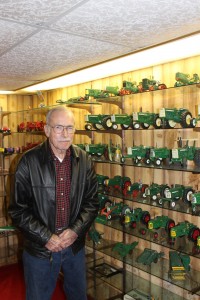 Baird said collecting the full size tractors and the toy size has been a great hobby because it has allowed him to stay connected to agriculture.

“The people in this hobby are great. They are farmers and collectors and they just want to remember the past,” said Baird.

For the past 35 years, Baird, 76, has attended the National Farm Toy Show in Dyersville, Iowa, where he was inducted this year. He joins 37 others in the National Farm Toy Hall of Fame, including such industry giants as Fred and Gertrude Ertl, who created the Ertl toy company in their basement in the late 1940s.