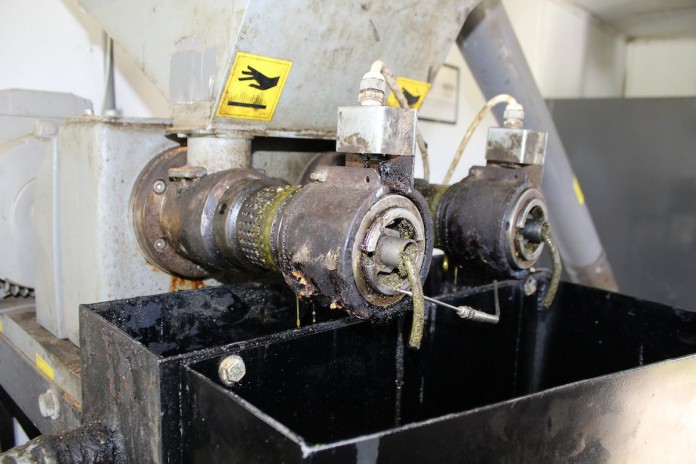 WOOSTER, Ohio — Farmers who want to produce their own fuel or their own brand of cooking oil should pay attention to the research being done on the Mellinger Farm just west of Wooster.

The 300-acre farm was established by the Mellinger family almost 200 years ago and was gifted to Ohio State University in 2002 for ag research. The first major research project involves growing oilseed crops like sunflowers, flax, canola and camelina.

During a workshop Sept. 24, researchers with the Ohio Agricultural Research and Development Center reviewed quarter-acre test plots and showed spectators how oilseeds are grown, harvested and processed.

Oilseeds can be processed to create biofuels for trucks and tractors, or they can be used for cooking. The leftover pulp can be used as a livestock feed supplement. 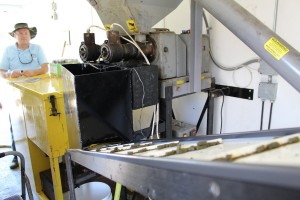 The biggest attraction at the one-day workshop was the oilseed press, brought courtesy of Organic Valley, an 1,800-member farm cooperative headquartered in Wisconsin. The press is housed inside a small box trailer and set up to press high-oil seeds 24 hours a day, with little oversight.

Zach Biermann, biofuels coordinator for Organic Valley, said the press can process about 200 gallons of oil a day and usually only needs farmer intervention twice in a day’s time.

The seeds dispense into the press by gravity and the pressed oil is collected below in a liquids container. At the same time, the pellet-like solids are carried away on a conveyor belt. The oil can then be filtered or left to settle, to remove foreign materials.

The oil can be burned directly in engines converted to run on oils, or it can be mixed with diesel to create biodiesel.

Biermann said it’s important to remember that the oil is flammable, and that too much heat will cause a fire. The press used by Organic Valley costs about $12,500, although larger and smaller presses are available.

From a fuels standpoint, Biermann said it works good for farmers to plant about 10 percent of their tillable acres to oilseeds — if they plan to have enough crop to produce their own fuel.

Historically, that’s also the amount of land many horse-powered farms set aside for feed for their horses, Biermann said.

“It’s pretty cool that this works out the same way,” he said. “We can set aside 10 percent of our tillable land to grow our own fuel. It’s something that’s been done for years and years and we’re just getting back to it.”

Along with fuels and cooking oils, oilseed crops have many other uses. Some of the plants have good fiber uses.Flax, for example, can be used for weaving and in the 1800s it was the crop of choice by the Mellinger family, which created elaborate linen tablecloths. 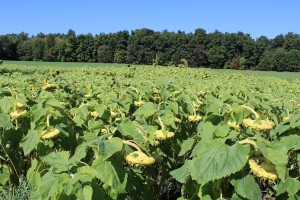 Flax oil can be consumed by people and livestock, and can be pressed to produce linseed oil. Linseed oil is used in a variety of products, including wood finishes, paints and linoleum. It is also consumed as a nutritional supplement due to its high level of omega-3 fatty acids.

Oilseed crops also offer a crop rotation choice and some crops — especially canola and sunflowers — are known to open up pour spaces in the soil. They also provide a food choice for pollinators.

There are “all kinds of potential values that come out of this sort of crop,” said Casey Hoy, the OARDC’s Kellogg Endowed Chair in Agricultural Ecosystem Management. Grower perspective.

Dave Tegtmeier, of nearby Congress, Ohio, grows about 30 acres of sunflowers with his family. They operate Sunsational Oil and press and sell their own sunflower oil into niche markets, including Local Roots of Wooster, and a couple private colleges.

he Tegtmeiers have been growing sunflowers for about four years and their product now sells across the state. What they don’t sell for oil, they sell for birdseed.

Tegtmeier said he attended the workshop to get keep up with the latest on oilseed research.

There are still many unknowns about the potential for oil crops in Ohio, but researchers hope to provide more answers from their plot at Mellinger Farm, including the best possible uses.

Whitehead said yields for flax and canola were down from what researchers expected, primarily due to a wet growing season. A 14-day stretch of heavy rain caused white mold in the canola, and led to shattering and seed loss.

The wet weather also flattened flax plants — many which did not recover. Another issue that hurt the flax yields, she said, is researchers were unable to locate windrowing equipment. This meant they had to direct-combine the plots, which led to more seed loss.

Learning experience. Whitehead said the trials of the first year were helpful, though, and will likely lead to better yields in the future.

“These pitfalls were extremely useful, given that these were demonstration plots,” she said. “For instance, we know that anyone growing spring canola should monitor their fields for (white mold). In order to avoid it, it is best not to plant canola on low-lying or poorly drained soils, and to separate it in rotation from other susceptible crops (sunflower, soybeans).

“In terms of the flax, we recommend windrowing (if possible), or planting earlier in order to beat out the weeds. It might also improve yields to plant in a more protected area where the flax may be less susceptible to lodging,” she said.

As for camelina, the OARDC plot produced almost 700 pounds per acre, well within the yield range researchers expected.