There were six permits issued for wells to be drilled in Harrison County.

The ODNR issued three permits in Archer Township and three in North Township; all were issued to Chesapeake Exploration.

The ODNR issued six permits in Monroe County. Three were issued to Eclipse Resources I LP for two wells to be drilled in Salem Township and the other was issued to Lee Township.

An additional two permits were issued to Hall Drilling LLC. for wells to be drilled in Bethel Township.

A single permit was issued in Monroe County to HG Energy LLC.

In addition, six permits have been issued in 2013 for drilling in the Marcellus shale. Five permits were issued in Ohio and one was issued in Lee Township. 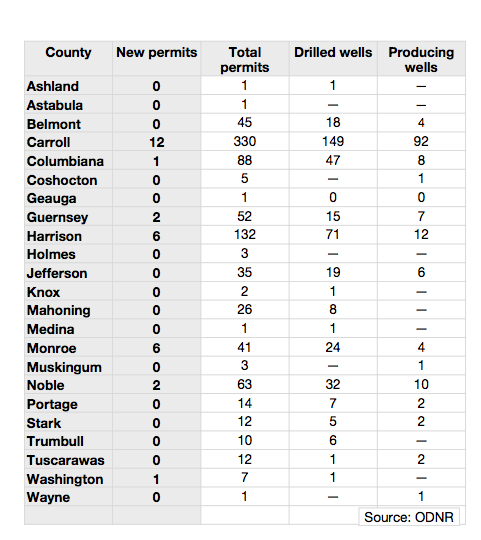 In Guernsey and Noble counties, two permits were issued in each county.

In Noble County, both permits were issued in Seneca Township to Antero Resources Corporation for the same well pad.

In Columbiana County, a single permit was issued to Chesapeake Exploration for a well to be drilled in Hanover Township.

The ODNR issued a single permit in Washington County for a well to be drilled in Salem Township. The permit was issued to EM Energy Ohio LLC.

It is the first permit issued in Ohio to EM Energy Ohio LLC.

According to the ODNR, there are 34 drilling rigs in Ohio. So far, 899 permits have been issued and 561 wells have been drilled in Ohio.

There were 24 well permits issued by the Pennsylvania Department of Environmental Protection in those counties.

Susquehanna is being drilled heavily by Chesapeake Exploration after a high-producing well was discovered there in 2012.

In Bradford County and Washington County during September, there were 11 wells drilled. The DEP reported there were 20 drilled in Susquehanna County.

Meanwhile, the DEP issued 11 permits issued for drilling in Greene County. According to the DEP, 24 wells were drilled during September.

Other counties we’re noting were Beaver and Fayette counties with five new permits issued in each county for drilling, and seven in Butler County.

One new well was drilled in Beaver County, according to the DEP and four were drilled in Fayette County.

The DEP also issued a permit for drilling a gas well in Lawrence County. In addition, the DEP reported one well was drilled.

The West Virginia Department of Environmental Protection issued several permits for drilling in the Utica shale during September.

The West Virginia DEP also issued a permit to EQT Production Company for a well to be drilled in Wetzel County.