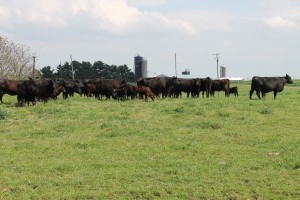 WOOSTER, Ohio — The Ohio Cattlemen’s Association and Ohio Beef Council want to double the state’s beef checkoff from $1 to $2.

The issue will be voted upon by cattle producers Sept. 24-26 through a statewide referendum, in compliance with Ohio Department of Agriculture requirements for increasing a checkoff contribution.

Voting will take place at all county offices of Ohio State University Extension.

The cattlemen’s association says an increase hasn’t been made since 1985, when the checkoff was established at $1 per head. Since that time the number of cattle produced has declined, decreasing the amount generated for the checkoff.

“The Ohio Beef Council’s budget today is in the neighborhood of $300,000,” said Elizabeth Harsh, executive director of both the OCA and Ohio Beef Council. With the $1 increase, she estimates total income would more than double, but still be under $1 million.

Harsh said the current $1 checkoff purchases only about 47 cents of what it did in 1985.

“Trying to maintain the same sense of advertising is an impossibility,” she said.

Sam Sutherly, Miami County beef farmer and OCA president, said checkoff is a proven way to help the industry beyond what farmers could ever do on their own.

“We can all do our own niche marketing, but as a whole, I feel it’s (checkoff) very important,” he said, because it educates consumers about the nutritional and overall value of beef.

Of the current $1 checkoff, 50 cents goes to the national beef checkoff program. If an additional dollar is approved, the additional money would stay in Ohio, Sutherly said.

Harsh said producers would have the right to have the additional $1 refunded to them, if they choose, because ODA policy only allows for the $1 amount to be collected.

She said Ohio is among several other states that are pursuing a similar increase in their state checkoffs, in addition to eight that have already increased their checkoff.

To be successful, the referendum generally needs a two-thirds approval by voters who represent at least 51 percent of the cattle represented.

For more information about voting, visit the OCA website.