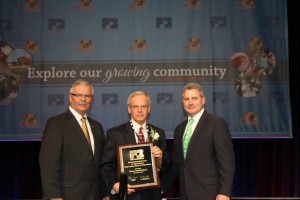 Tom Schlenker was honored with the Distinguished Service Award from the Ohio Farm Bureau Federation Dec. 5.

Schlenker began his career as an OSU Extension agent, but spent the majority of his professional life within the Farm Credit system, first as an account officer for the Federal Land Bank and retiring as executive vice president of Farm Credit Mid-America.

He served on numerous boards including Ohio Livestock Coalition, Ohio Ag Council, Animals for Life Foundation, and 4-H Foundation. He also provided leadership to many national cooperative organizations and is the winner of multiple industry achievement awards. 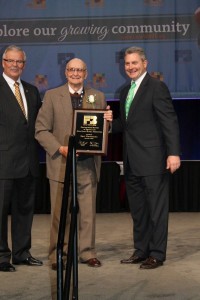 He also mentored young farmer and adult farmer organizations. He was a recipient of the American FFA Degree, was named Outstanding Agriculture Teacher for the state of Ohio and is a past Ambassador Club member for Ohio Farm Bureau, meaning he signed 10 or more new members in one year.

He also has been active with the county’s hospital governance board, the local electric cooperative and his county Farm Bureau. 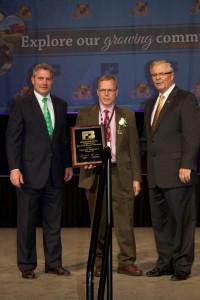 Pat Leimbach was also bestowed the honor of the Distinguished Service Award. Leimbach, whose award was presented posthumously, was best known as an author and speaker who drew attention to farmers and the rural lifestyle.

Her “Country Wife” articles and other essays were syndicated nationally and she was the author of three books. She spoke at farm events in 48 states and in Canada.

Leimbach was a founding member of American Agri-Women and its Ohio affiliate. She won numerous awards including induction into the Ohio Agricultural Hall of Fame. Her son, Orrin Leimbach, accepted the award for the family. 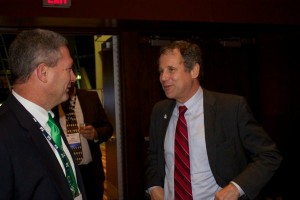 U.S. Senator Sherrod Brown stopped by the annual meeting to give an update on the farm bill.

Here he is talking with OFBF President Steve Hirsch of Chillicothe. Hirsch has been re-elected president of the Ohio Farm Bureau Federation. He holds the highest elected office in the state’s largest farm organization.

Check back here for more on what policies were voted on and what trustees were re-elected at the 95th annual OFBF meeting.