WAUSEON, Ohio — Farmers and scientists have raised a lot of questions over the past few years about how phosphorus and other nutrients are leaving crop fields and getting into the state’s water bodies.

Pretty soon they’ll have some concrete answers, and many of those answers will have come directly from the farm.

Henry County grain farmer Todd Hesterman is one of several who have opened their farms to on-farm research. At the end of one of his soybean fields are two water monitoring stations that measure tile flow, and automatically collect samples for nutrient analysis.

Whatever is coming off his field will be recorded and known, and Hesterman, who is a member of the state’s Phosphorus Task Force, is fine with that. In fact, he wants to know — so he and other farmers can implement the best practices to keep nutrients in place. 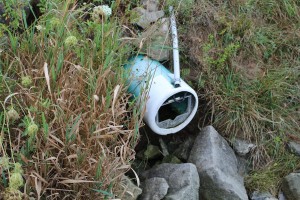 The monitoring site is managed by Kevin King, an engineer with the U.S. Department of Agriculture’s Agricultural Research Service. Currently, researchers are completing their second year of baseline data on the field, and will soon divide it to compare two different kinds of nutrient application, or two different cropping systems.

There are about 34 other fields in the western half of the state with similar field monitoring.

“The ag community is really proactive in this. They’re wanting to find a solution,” King said. “They want voluntary rather than regulatory.”

In a field several miles north, near the Ohio-Michigan line, grain farmer Les Seiler has opened a whole field for a new drainage project — known as a two-stage ditch. The ditch, which always ran through his family’s farm, is being completely redone to include better tile outlets and more capacity.

The two-stage feature means water has two channels within the same ditch. The lower, primary channel will see the most use, and the wider, upper channel will help mitigate larger flow during heavy rain events.

The ditch is being constructed by the Nature Conservancy and the Fulton County Soil and Water Conservation District. The total cost is about $30,000.

The construction process required a large amount of excavation and cost Seiler a few acres of corn this year, but when complete, he figures he’ll have gained, because most of the ground near the ditch can be planted back to crops, and now there will be less runoff.

For more on the Ohio fertilizer certification prog.

“I think this is going to be some of the stuff that will have to be looked at,” he said of the project. “If I’m contributing phosphorous through my outlet, I want to know.”

Seiler, who farms about 1,300 acres with his brother, Jerry, said he’s also noticing an increase in heavy rain events. This increases the usefulness of the larger, two-stage ditches.

Farmers in the area are also working to build their soil’s organic matter. Neither Seiler nor Hesterman are organic farmers, by definition, but they’ve been practicing no-till farming since the 1980s, which helps keep the soil in place and builds soil structure by not disturbing the soil through tillage.

When Seiler harvests his wheat, he usually leaves the stubble on the ground to rot into the soil. And, he plants cover crops where he can — this year experimenting with a cover-crop mix that includes 11 seed varieties.

He’s also experimenting with new ways of applying manure, including variable rates per the crop needs, and ways to apply it closer to the roots.

Driving down the road in his pickup, he points to fields that have been well managed, and those that have not. One of the problems, he said, is that farmers have relied too heavily on the same crops year-after-year — failing to do a rotation.

“We’ve lost all of our diversity,” he said. “We’ve degraded our soils with all of this.”

In some cases, he said fields that have been over-tilled are actually lower in elevation than those that use no-till.

One field in particular just came out of the state’s Conservation Reserve Program — meaning it sat idle for 10 years. The soybeans growing there now are a deep green, healthy color and the crop looks good.

One shovel full of the new dirt shows that it has a good, loamy structure, and the soil particles easily separate with the touch of

a hand. With continued no-till, he expects the ground will become even more fertile.

A few miles south of the Seiler farm is the Andre farm, where Nate Andre and his family crop farm and also run an EPA-licensed composting business.

They farm a little more than 1,000 acres and those acres vary tremendously in terms of soil type. In some cases, there are multiple soil types in the same field, and some fields contain a low-quality, yellow sandy soil known as spinks.

To remedy the poorer soil, Andre does the same things as other farmers in the area, including soil testing and variable rate nutrient application.

However, because he has his own composting facility, he has a valuable source of organic nutrients that not only improves soil fertility, but also improves soil structure and the soil’s ability to retain rainwater.

Andre is EPA certified as a class 2 composting facility, allowing him to accept food waste from grocery stores and blend it with livestock manure to make compost.

Companies like Kroger and Wal-Mart truck food waste — no sludge — to his farm, where he spends a month or more mixing and moving each load, until it becomes more soil-like and loses most of its odor.

Runoff from the compost, which includes water in the food and rainwater, is all caught in a 6.5-million gallon lagoon, where it’s later applied on the Andre home farm.

The solids are applied to farmers’ fields within a 30-mile radius. Nutritionally, the compost has about 300 percent of the nutrients as typical topsoil, according to Andre.

The compost is also used by landscapers and homeowners.

Another technology that Andre has invested in are water control devices — which control the rate of flow leaving his field tile.

He has about a dozen of the structures, which were installed through various grant programs, and with matching funds.

They work by connecting several tile lines to a single, below-ground control box, in which a plate or a gate is inserted at various depths, to restrict or block off the flow of water.

During the growing season, Andre can back the water up, to retain more moisture for plant roots, and as harvest approaches, he can open the gates to drain the fields, before entering with heavy equipment.

Most importantly — from a conservation standpoint — is the reduction in nutrient loss.

USDA’s King, whose research includes water control devices, said some studies have shown up to a 40- to 65-percent reduction in phosphorus leaving the field when these devices are used, and nitrogen runoff is reduced by 40 to 60 percent.

Seiler has been hesitant to install control devices on his own land, fearing the watery, sandy soils on his farm might cause the field tiles to become too heavy and sink. However, if they hold up well on other farmers’ land, he might consider adding some.

About 750 control devices have been installed in Fulton and surrounding counties since 2009, according to Fulton County OSU Extension Educator Eric Richer. He said farmers can often get the cost down through grants, but also by purchasing multiple units at the same time.

With good results in nutrient reduction, and with government and private money being pledged, many more water control devices will come online within the next few years.

And, now that baseline data has been established on field monitoring sites, researchers are ready to begin putting different farming practices to the test.

There won’t be any hiding from the results — which will be shared with scientists and the farmers. But that’s also the goal.

“We’ve been working a long time to try and make good environmental decisions. We have to sell what we do,” Seiler said. “The next thing is regulation and I don’t think we’re going to want to know what that involves.”