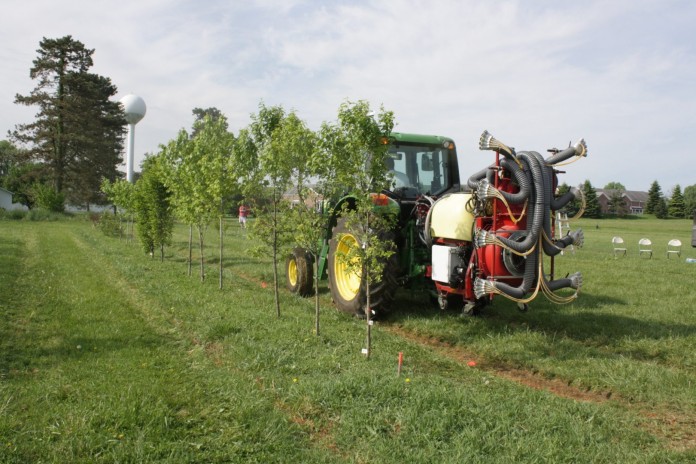 COLUMBUS — A new “intelligent” sprayer designed and developed jointly by engineers from Ohio State University’s College of Food, Agricultural, and Environmental Sciences and the U.S. Department of Agriculture’s Agricultural Research Service can reduce pesticide use up to 73 percent by growers while reducing off-target contamination.

In field experiments with nursery and orchard growers, the intelligent sprayer was found to provide more uniform spray coverage inside canopies with different foliage densities at different growth stages, Ozkan said. While the experiments so far have focused on nurseries, orchards and vineyards, the technology behind the intelligent sprayer can potentially be adapted for other types of sprayers and crops, he said.

“This is the only sprayer of its kind in the world,” Ozkan said. “It works by discharging pesticide sprays only when there is a target tree in sight and it matches the pesticide spray rate to the target tree characteristics, including its height and leaf density, in real-time.”

With the rising cost of pesticides and fertilizers, growers who want to save money and spray chemicals as efficiently as possible need to make sure they choose sprayers that work as accurately as possible, and get the job done with less use of chemical inputs, he said.

“Conventional orchard sprayers waste a considerable amount of pesticide because they keep a constant application rate throughout the growing season,” Ozkan said. “They don’t take into account the amount of foliage present at different growth stages.

“But the intelligent sprayer does, using a laser scanner mounted on the sprayer.”

By using the laser to detect canopy conditions and an algorithm to determine the amount of spray material needed for a given target type, the intelligent sprayer varies the application rate according to the foliage density on the tree, he said.

“This new technology will significantly reduce the amount and cost of pesticides for growers by accurately targeting spray applications,” Ozkan said. “Tests we conducted in an apple orchard showed that the intelligent sprayer reduced spray volume by 47 to 73 percent with much less off-target loss on the ground, through tree gaps and in the air.”

The costs of those wasted chemicals can be high. Farmers spend approximately $4.1 billion on pesticides annually, according to published reports. And large self-propelled sprayers can cost more than $250,000, according to the U.S. Environmental Protection Agency.

The savings for fruit and nursery crop growers could be significant, considering that many may spray weekly at certain points in the growing season.

“Some large orchards or nurseries spend near half a million dollars in pesticides to protect their crops,” he said. “The intelligent sprayer has the potential to cut pesticide consumption by 50 percent, resulting in a savings of hundreds of thousands of dollars.

“This new technology can also reduce the risk of environmental pollution by pesticides in addition to providing safer and healthier working conditions for workers.”

National surveys of field application results have shown that only about one out of three sprayers are applying pesticides at the recommended rates, while two-thirds are missing the mark by either over- or under-spraying, Ozkan said.

Overall advantages of the intelligent sprayer as compared to conventional sprayers include:

• Appropriate amount of spray use depending on varying growth stages.

• Up to 87 percent less airborne drift.

The intelligent sprayer work began as part of a Ph.D. dissertation by former Ohio State graduate student Yu Chen, in CFAES’s Department of Food, Agricultural and Biological Engineering, under the co-advisership of Ozkan and Heping Zhu at the USDA-ARS Application Technology Research unit at OARDC’s Wooster campus.

Further refinement and testing of the intelligent sprayer continued under the leadership of Zhu with a $1.8 million grant from USDA. The technology is now ready to be commercialized by sprayer companies.