SALEM, Ohio — As America continues its slow, but steady, economic recovery, some parts of the country are being left behind, according to the USDA’s report Rural America at a Glance.

The report, published annually by the USDA’s Economic Research Service (ERS), highlights social and economic conditions in America’s non-metro, or rural, counties. It’s a sort of check-up on the health of rural America, and the results published in the latest report were grim.

According to the report, rural America’s job growth is stagnant and the population is in decline. In fact, it’s the first time such a population decline has been recorded in the nation’s rural counties.

“What’s surprising is how quickly it changed from net population gain to population losses,” said Mark Partridge, who has a Ph.D. in economics and studies rural-urban interdependence at Ohio State University.

Partridge referred to the population gains rural areas experienced in the 1990s, during the “rural rebound.” 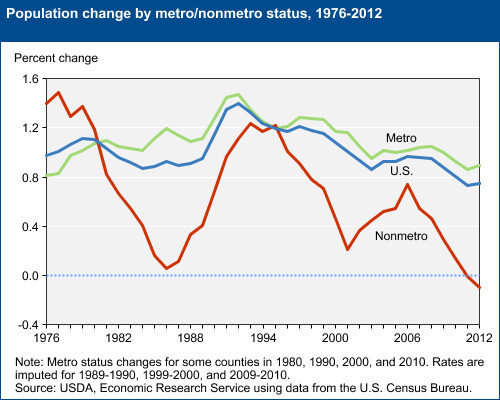 But, not only is rural America losing population, America, as a whole, is becoming less rural.

ERS researchers classify a county as metro if it: “contains a designated urbanized area of 50,000 or more people or that has large commuting flows to or from an adjacent county with at least one such urbanized area.”

“Nonmetro” counties are outside the boundaries of those metro areas.

ERS researchers further subdivide nonmetro into “micropolitan, or micro” areas, which are nonmetro labor-market areas centered on urban clusters of 10,000-49,999 persons and defined with the same criteria used to define metro areas; and “noncore” counties, which are all remaining counties.

Over time, areas can change, so every 10 years researchers reevaluate counties. If a county grows rapidly enough, it becomes reclassified as metro and vice versa, if a county begins shrinking. 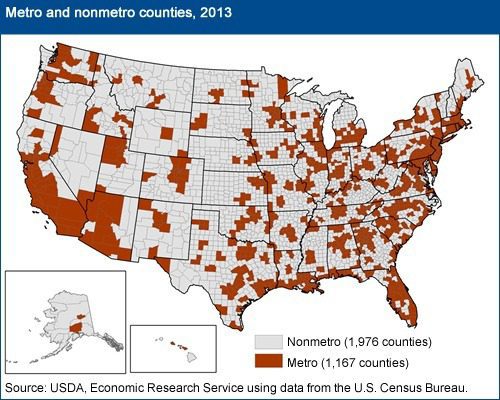 In March 2013, 113 nonmetro counties were classified as metro, and 36 counties switched from metro to nonmetro. The switch shrunk rural America by some 4.8 million people. However, population loss due to reclassification doesn’t impact the agency’s final number.

Aside from the shrinking size of rural America, why are rural residents leaving?

John Cromartie, a geographer with the Resource and Rural Economics Division at the USDA, thinks several things are impacting rural population loss.

One factor could be a change in residential preferences.

“We’re seeing population growth in central cities and a slowdown of suburbinization.”

According to the U.S. Census Bureau estimates, the nation’s largest 25 metro areas saw a 2.2 percent population growth from 2010-2012. Smaller metro areas grew at a slower rate at 1.7 percent. 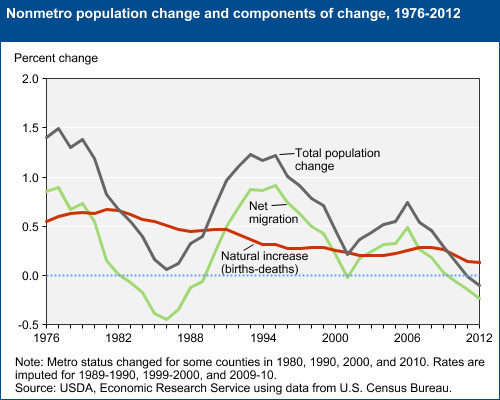 People are trading the comfort of the suburbs for the hustle and bustle of the city.

Historically, migration to scenic areas of the country has bolstered rural America’s population, but that influence is weakening.

During the recent recession, metro and nonmetro areas saw the number of employed people fall by just over 5 percent. Industries like construction and manufacturing were the hardest hit.

The sharpest employment declines were in the Southeastern United States and in the industrial areas of the Midwest. About 300,000 nonmetro manufacturing jobs were lost in 2008 alone.

Although, things could have been worse. Partridge said that the recession could’ve impacted rural America more if it wasn’t for a ‘massive commodity boom’ and a ‘minimal housing bust.’ Home prices weren’t as inflated in rural areas as they were in cities and suburbs.

Rural America may have been spared the worst of the losses during Great Recession, but what about the gains made during the recovery?

Metro and nonmetro areas alike began recovering jobs in 2010. But job growth in nonmetro counties has since stalled.

“Rural America is lagging in the recovery to some extent. Housing and manufacturing are not yet as strong as they were pre-recession,” said Partridge.

Not only are manufacturing jobs lagging, but high-skill, high-paying jobs reside elsewhere.

A report released by the Federal Reserve Bank of New York, Workforce Skills across the Urban-Rural Hierarchy, found that urban centers tend to offer high-skilled and high-paying occupations.

Rural areas, however, have larger concentrations of “makers” or occupations like machinists, builders and laborers, professions that have a, “relatively flat earnings trajectory” according to the report.

The USDA report came to the same conclusion. The average wage for workers in nonmetro areas was about 20 percent lower than in metro areas.

Not a chicken or the egg scenario 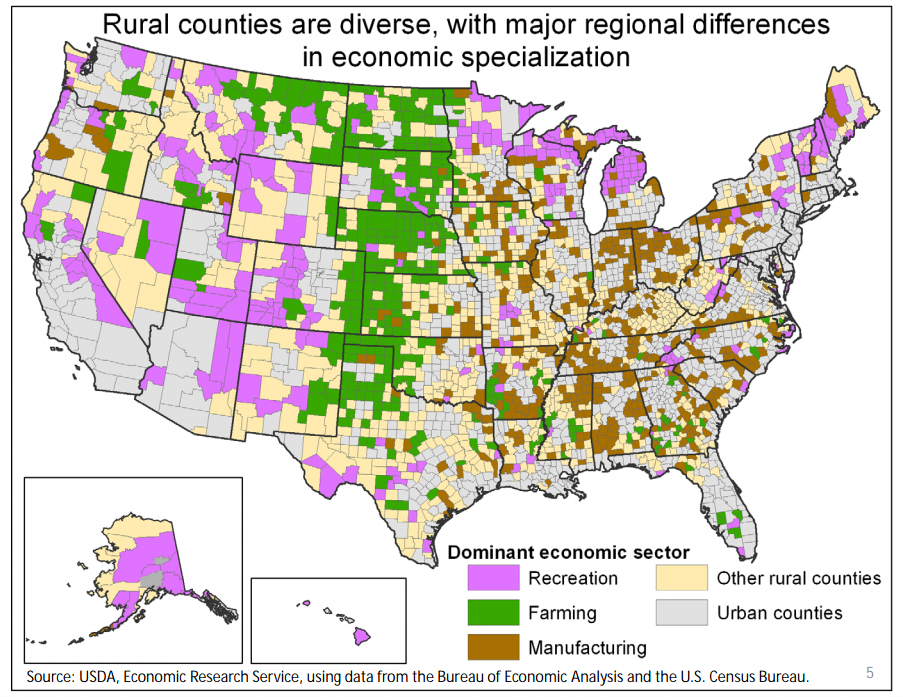 Low-paying jobs are particularly worrisome to the nation’s young people, and they’re leaving rural areas in response to the tepid job growth.

Those graduating in 2012 carried an average of $29,000 in debt, according to a report by the Institute for College Access & Success’ Project on Student Debt.

Not surprisingly, young people are making up much of the population gains in cities.

The shrinking rural population is not unprecedented, according to Partridge. In the 1950s and ’60s, there was a mass exodus from rural areas to cities, but that migration was offset by the baby boom. Today, however, the birthrate isn’t high enough to offset out migration.

In November, Agriculture Secretary Tom Vilsack released a statement about the ERS report’s findings. He said the report, “highlights the critical need for a new Food, Farm and Jobs Bill that will help to reverse troubling demographic and economic patterns in Rural America.”

He continued by adding, “This is just one reminder that we need a national commitment to create new opportunities in rural America that keeps folks in our small towns and reignites economic growth across the nation.”

There is hope in some rural towns in the form of new horizontal oil and gas well drilling. The boom has uplifted communities in Texas, eastern Ohio, Pennsylvania and in the Northern Great Plains.

But many counties still lost population despite the energy boom. In the end, it all depends on where you live.

Partridge is “modestly optimistic” about rural America’s future, but he warns some areas may want to switch from an expansion and growth model to a model of decline.

He’s hesitant to declare the population loss a crisis, saying more data is needed to come to any conclusions.

Cromartie, however, said that the population migration is a long-term trend that isn’t about to change.

“We’ll see more of this in the future.”