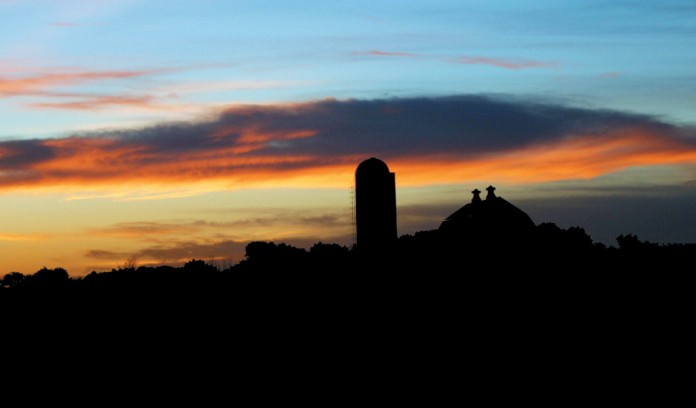 In winter of 2019, Sarah Noggle, Ohio State University Extension educator, took a call at her office, in Paulding County. “I want to thank you,” the caller said. “My mom is alive because of what you did.”

Two weeks before that call, a middle-aged Ohio woman packed a loaded 9 mm gun in her truck. She would use it on herself, she had decided, after pulling off to the side of the road.

But throughout the morning and early afternoon that day, she sat in a workshop about raising bees. She had signed up for it, she later told the organizer, so she would have an excuse to leave the house for most of the day, an excuse to be gone and her family not to worry.

At the end of the workshop, after many of the participants had left, the woman helped the workshop’s organizer, Noggle, put things away. Just a day earlier, Noggle finished a training on farm stress and how to recognize and assist someone in a mental health crisis.

As she helped rearrange chairs, the woman told Noggle her farm family had been struggling financially. Then she mentioned the gun. “Hey, let me hold onto your keys, and let’s talk about this,” Noggle said.

She asked the woman if they could call the National Suicide Hotline together.

Outside, thick snow was falling. Noggle’s cell phone was needing to be recharged. “My hands were shaking,” Noggle said. “I was sweating. What if I say the wrong thing, do the wrong thing?”

The person who answered the suicide hotline stayed on the line while connecting Noggle and the woman with a northwest Ohio behavioral health provider. That person sent a representative to drive the woman back to their facility. Then Noggle headed home, still shaken.

Though it’s been over a year, Noggle still tears up when she recounts that story. Not long after the incident, she and a team of colleagues began pursuing a federal grant to help farmers and their families overwhelmed by stress. The result of her efforts and others in OSU Extension has led to grant funding for an emergency hotline specifically for the agricultural community and for the recent hiring of OSU Extension’s first behavioral health specialist, Bridget Britton.

Britton will train extension employees, rural health care providers, and others in Ohio who work within the agricultural community to know how to direct someone in crisis to help.

“If we don’t do anything but save one life or one family or one child, from undue stress, the grant will have paid for itself,” said Sam Custer, interim assistant director for OSU Extension.

In agricultural communities, so much emphasis is put on raising a successful crop or herd of livestock that the physical and mental health of the people involved are an afterthought, Custer said.

“‘If I can’t get that crop, I’m a failure,’ and that plays into mental health issues,” he said.

The pandemic has brought a greater awareness of mental health and how life circumstances affect how people think and feel. But farmers have long had to deal with swings in conditions from year to year.

2019 was one of those years — for the woman Noggle met who had planned to take her life and for farmers across the state.

Seemingly nonstop spring rain jeopardized planting for some, and a trade war caused soybean and corn prices to dip. The continuing pandemic has also brought its challenges, offering fewer social outlets off the farm.

“In our small rural communities, people de-stress by helping with the county fair, by volunteering for a church ice cream stand. This past year people couldn’t do that,” Noggle said.

In agriculture, stress can be cyclical based on profit margins or other circumstances. If commodity prices are low, if rainy weather hinders planting, if trade decisions cut demand for certain crops, then profits can suffer, all from circumstances a farmer can’t control. While commodity prices have come up, so has the cost of fertilizer and feed for livestock. And the state remains in the middle of an opioid epidemic in which rural counties have been hit hard.

“We’ve all had discussions in the barn or around the kitchen table and listened to some sad stories about farm profitability and concerns about passing on the farm, or something has happened in the family and people are worried how that’s going to change the way the farm operates,” said Chris Zoller, an associate professor and OSU Extension educator in Tuscarawas County.

Zoller’s hope is that OSU Extension can help people get past their reluctance to even talk about a challenge with depression, anxiety, drug abuse or another issue. “Mental health is a real issue that people are affected by: individuals, families, and communities. It sort of has a ripple effect,” Zoller said.

And yet, in rural areas, there are fewer counselors, and psychologists or psychiatrists are a long drive away — if they even have appointments available. Through OSU Extension’s new grant, Ohio residents will have the opportunity in 2023 to pursue counseling with mental health professionals, meeting them online.

That could also eliminate the fear that can keep some people from getting help in a small town, the fear that someone will recognize their car parked in front of a counselor’s office.

“If we had a heart doctor we were going to see, we wouldn’t think twice about it,” Zoller said. “Somehow mental health is different.”

In farming communities, some cling to the notion held by their fathers and by their grandfathers: You need to pick yourself up by the bootstraps and carry on. “We want to help people understand a mental health issue is not a sign of weakness,” Zoller said. “We’re hoping to break through that.”