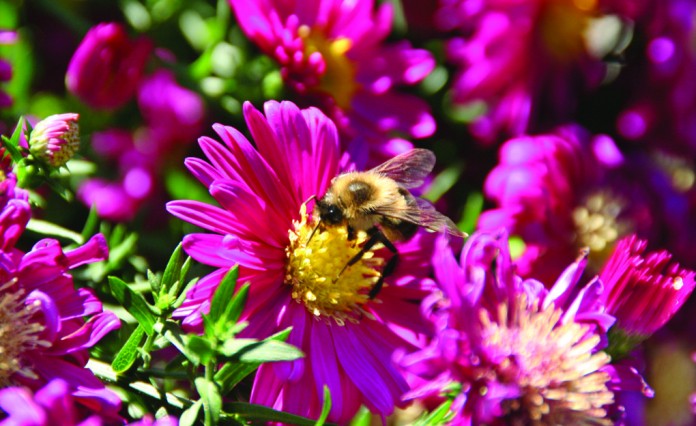 WASHINGTON — Are plant-pollinator networks holding together as the insects and plants in the network are jostled by climate change and habitat loss?

The question is difficult to answer because there is no baseline: Few historic datasets record when plants first bloomed or insects first appeared and almost none follow both plants and insects.

Which is why biologist Tiffany Knight and her then-postdoctoral research associate Laura Burkle were delighted to discover meticulous data on a plant-pollinator network recorded by Illinois naturalist Charles Robertson between 1887 and 1916.

Re-collecting 26 spring-blooming flowers from Robertson’s network, Knight, professor of biology at Washington University in St. Louis, and Burkle, now assistant professor of ecology at Montana State University, discovered that the network had weakened.

Half the bee species associated with these flowers in Robertson’s lifetime had disappeared, some pollinators were active before their plants had bloomed, plants weren’t visited as often, and the bees that did visit weren’t carrying as much usable pollen.

“The network is still there and still functioning, despite major perturbations,” Knight said. “The bees still have food, plants are still getting pollinator service. But the service has declined, the network’s structure is weaker, and its response to future perturbations much less certain,” she said. 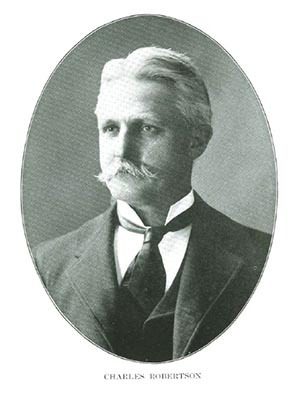 A professor of biology and Greek at Blackburn College in Carlinville, Ill., Charles Robertson collected flower-visiting insects near Carlinville between 1887 and 1916.

Over 20 years, Robertson recorded visits from 1,429 pollinators (including flies, beetles and butterflies, as well as bees) to 456 plant species. He identified and described several hundred insects previously unknown to science.

So respected is he among entomologists that roughly 20 additional species have been named for him.

Robertson’s meticulous database is probably the oldest of its type for flower-visiting insects.

“Before Robertson,” said co-author John Marlin, a research affiliate at the University of Illinois’ Prairie Research Institute who had re-collected part of Robertson’s network in the 1970s, “almost all insect collecting was done independently of the plant.

“Robertson was one of the first to record the insect, the plant it was collected on, to the extent possible what the insect was doing, and other factors, which led to an explosion of information on insect-plant relationships.”

Burkle said she particularly enjoyed the sleuthing needed to figure out Robertson’s methods so that they could replicate them.

“It was like solving a mystery, she said, trying to deduce what he had done from old ledgers, specimen I.D. tags, and his privately published book Flowers and Insects.”

How network is doing

“Robertson studied it all,” Knight said. “He studied forests, he studied prairies, he studied roadside plants, he studied old fields; he even moved some plants to his own yard so he could study them more easily. If it was a species of flowering plant within a 10-mile radius of Carlinville, it was in his study.”

Knight said they re-collected a subset of the network Robertson collected, focusing on one plant community: forest spring ephemeral plants.

“We looked at 26 plant species in this community, which were associated with 109 bees in Robertson’s time.”

“If any community is going to be affected by climate change,” Knight said, “it would be this one, because the plants flower soon after the winter snow melts.” 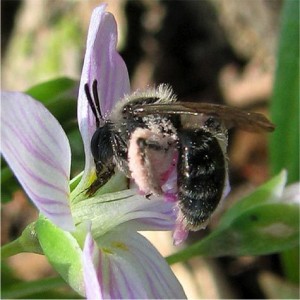 In many ways, the most startling finding to emerge from the re-collection was that half of Robertson’s bees were nowhere to be found. The scientists never

saw them. Robertson’s bees were mostly solitary bees, small, nondescript bees that lay a few eggs in cells and leave their young to develop on their own.

“Some of these bees have broad distributions, encompassing, for example, the entire eastern United States, so even though they’re locally extirpated, most are not extinct,” said Knight.

The re-collection also revealed timing mismatches between the bees and the plants. Plants were flowering earlier than they had in Robertson’s time: on average 9.5 days earlier. Bees were active earlier too: on average 11 days earlier.

But despite similar average shifts, timing mismatches occurred, because the early-season bees advanced a lot more than the late-season bees, said Knight, and no such pattern occurred among the plants.

Moreover, everything had speeded up. The flowers were in bloom eight fewer days on average and the insects flew for 22.5 fewer days.Because everything was more compressed, there was less overlap and less time for successful pollination.

Of the 532 pairings between the plants and bees that linked the subset of Robertson’s network that Knight and Burkle studied, 406 had been lost (but 120 new pairings had been gained).  Forty-five percent of the links were broken because bee species were missing, and the rest had broken for other reasons, including timing mismatches or habitat fragmentation.  Uncovered another detective. But Burkle and Knight were aware that counting network links was a crude measure of pollination services.

“All the network diagrams say is the bee is present, the plant is present, and we saw them interacting at least once,” Knight said.

“Robertson didn’t keep track of how much time he spent in the field watching each flower, so we couldn’t get visitation rates from his data. But, of course, we searched the literature to see whether anybody had published on the Carlinville network since Robertson, and one person had.”

That person turned out to be Marlin, the co-author on this research.

“All through high school I studied bees and ants,” he said, “and when I came to college, the Illinois Natural History Survey hired me to help collect insects around the state.
“In my senior year I was asked to collect bees at Carlinville to try to duplicate as much as possible Robertson’s efforts. I spent two seasons collecting on 24 plants that Robertson had collected on.”

One of the plants Marlin studied was Claytonia virginica, commonly known as “spring beauty.”

“We were very interested in Claytonia virginica because it is the plant in the network currently visited by the greatest diversity of bees,” Knight said. “Marlin’s dataset gave us visitation rate, a quantitative measure of pollination we otherwise wouldn’t have had.

“Comparing the visitation rates we measured to Marlin’s, we discovered that the bees were making fewer trips to the flowers than they had in the 1970s.

“Marlin counted 0.59 bee arrivals per minute and we counted 0.14 arrivals. So even those some interactions are still present, they’re weaker.”

Old pollen clues. Both Robertson and Marlin had collected their bees, pinned them, and deposited them in the Illinois Natural History Survey, often still fuzzy with pollen.

To assess how much usable pollen the bees had carried, Burkle and Knight picked six bees species that frequently visited Claytonia virginica, two of them named by Robertson, and washed Robertson’s archival specimens of those bees, Marlin’s specimens and their own.

“We gave the bee a gentle bath and washed its pollen off onto a microscope slide and then we fluffed it back up with a hair dryer,” Knight said.

Since these were all the same species of bee caught off the same flower, the default assumption was that they’d be covered in much the same pollen.

It turned out that these bees had been more loyal to Claytonia in the past than they were now.

The fraction of the pollen on the bee contributed by Claytonia virginica was highest in Robertson’s time, lower in Marlin’s time and much lower in 2010.

Since pollen from another species of plant is at best unusable and at worst can clog up pistils, preventing fertilization, the bee washings also pointed to a decline in pollination services.

“I was surprised by how tenuous a lot of these plant-bee interactions are,” Burkle said. “We’ve pushed on these communities a lot, and they are pretty robust, but at the same time, they are compromised, and more compromised than I was expecting them to be.

There have been major changes in Robertson’s network over the past 120 years, Knight said. The good news is that the network proved flexible, and many of the broken connections were replaced with new ones.

But the bad news is that network has been restructured in ways that will make it less resilient to disturbances in the future.

“We can’t just kick these plant-pollinator networks forever and expect them to keep functioning,” Knight said.