CANONSBURG, Pa. — It’s not uncommon for a calf to be born prematurely — especially when it’s a twin. But one Washington County calf has left its owner and veterinarian surprised after he was born eight weeks early and weighed less than 20 pounds.

Holly Martin and her husband, Ed, of Canonsburg, have nursed the young bull calf inside their home since it was born, just four weeks ago.

The first few nights were most critical, and veterinarians did not expect the calf to live.

“I was sitting up with him all night,” Holly Martin said. “We didn’t even think he would make it through the night and then he did.” 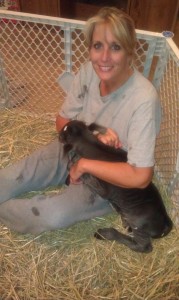 The calf, a Holstein-Brown Swiss mix, was about the size of the Martins’ beagle when it was born. They weigh him weekly and he’s now more than 30 pounds — still well below the 70-100-pound range for normal calves.

He even has a name — Amos — and he’s become a sensation on YouTube and Facebook. A special Facebook page called Fans of Amos shows his most recent updates.

“It’s amazing he was born at 19.8 pounds with peach fuzz and was smaller than their beagle dog,” said Jeff Bissett, the family’s veterinarian. “It’s quite remarkable that he has made it.”

The Martins farm 120 acres and manage a small dairy cow operation. They milk 24 head of cows.

But right now, all the attention is with Amos.

Holly Martin said children enjoy coming to their farm to see him, and he’s gaining fans as far away as California.

She first called veterinarians at Ohio State University, about what to do, and they recommended taking Amos to a neonatal incubation unit. But she determined that wasn’t practical and has committed herself to nursing the calf on the farm, with help from her own vet.

Martin said she chose the name Amos because she was reading her Bible the night Amos was born and searching for names that showed “strength.” She decided on Amos, the name of a Biblical prophet.

She said her husband believes it was “the cow’s good milk” that helped Amos survive. But she insists “it was the prayers.”

Even at four weeks old and 30-plus pounds, the calf still has challenges ahead. And he’s recently overcome some pneumonia. But experts say he’s come a long way, and is more likely to make it.

Jud Heinrich, professor of dairy sciences at Penn State, said lung development is one of the most critical issues in premature calves. As long as they develop, the animal is often OK, he said.

Even though Martin is doing a lot of the care on her own, Bissett said the calf is in good hands.

“This lady is on top of it,” he said. “She’s on him and takes daily account of his health and differences that are going on.”

Check out the Martins’ blog about their farm and calf here.