CARDINGTON, Ohio — “Everybody take a big, deep breath. … and hold it.”

Those were the instructions Patricia Davies, director of operations at the Morrow County Development Office, gave at the dedication ceremony for a new anaerobic digester Sept. 20 near Cardington.

While that breath of air had obvious hints of a livestock farm, it was also surprisingly fresh, thanks to the waste being contained inside the massive digester to Davies’ far left.

Her enthusiasm was clear.

“We are the land of opportunity,” she said. “We are strengthened by this progressive agriculture and here in Morrow County we love life and we live rural and we’re proud of it.”

The digester was brought into operation this spring, thanks in part to funding through the U.S. Department of Agriculture’s Rural Energy for America Program. It produces enough electric for the local farm, owned by Ringler Farms, and exports enough electric to power about 500 residential homes. 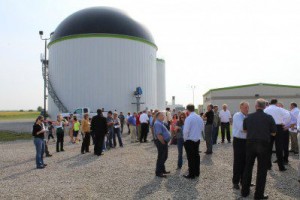 “We take roughly 4 million gallons of hog manure that would normally be held in outside earthen lagoons and now that manure never gets the light of day,” said Ringler Energy President Alex Ringler. “It is economically viable and, of course, environmentally conscious.”

The digester is a way for him to sustain his third-generation farm for the next generation of Ringlers — his sons. It also diverts wastes out of landfills and fields, and provides a renewable source of energy.

“What society makes, we repurpose, and we create an asset from a liability,” he said.

After digestion, the farm is left with a mostly odorless fertilizer product that quasar calls “equate.” This is applied to fields similarly to manure, and provides an organic source of field nutrients.

Ohio Agriculture Director David Daniels said digesters are “another landmark” in Ohio’s agriculture story, and a good example that agriculture is a diverse science, with many different job opportunities. 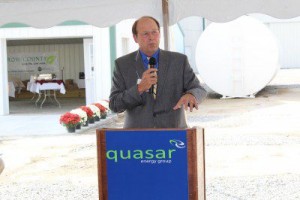 The facility was built in part with a $500,000 U.S. Department of Agriculture grant, and a $2.75 million loan guarantee that must be paid back.

Ringler employs 100-150 people across all of its divisions. The company plans to begin construction on a compressed natural gas station off of Interstate 71, at the state Route 61 exit, by the end of this year.

Alex Ringler declined to specify the rate of return on the digester, but said “it’s a good financial investment. It’s stable.”

In addition to generating electric for the local grid, managed by Consolidated Electric Cooperative, the farm will collect tipping fees based on the amount of wastes collected from local suppliers.

Tony Logan, Ohio’s USDA rural development director, called it “a perfect example of how new technologies can be used to create another profit center for farming.”

Rural developers and energy companies want to see more digesters built.Only half of a percent of all eligible farms have installed digesters, according to Allison Costa, AgSTAR Program Manager with the U.S. EPA. About 6 percent of financially eligible dairy farms have digesters, she said.

While digesters are exciting, and rewarding, they’re also a big responsibility. They require startup dollars, and a good maintenance plan.“It’s a simple process but there are many components,” Alex Ringler said. “You can build it all day long, but you’ve got to be able to operate it.”

Quasar energy group plans to have 14 operational digesters in the state by the end of the year — which it says will be the most of any state for this type of unit.