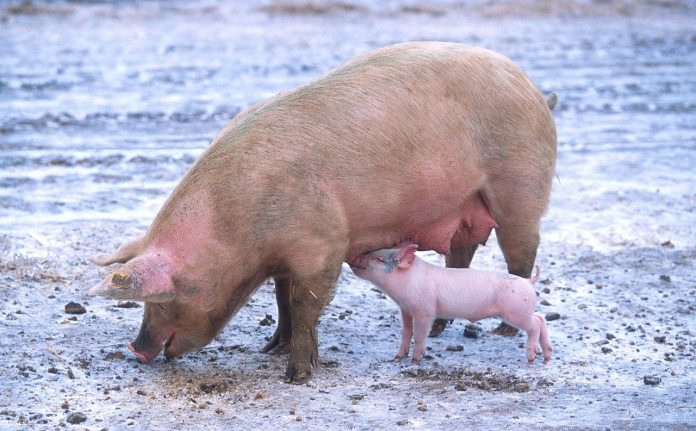 HARRISBURG, Pa. — USDA Veterinary Services has been working with state and industry partners on an investigation into swine mortalities attributed to Streptococcus equi subspecies zooepidemicus (S. zooepidemicus or Strep zoo).

Strep zoo can be zoonotic, meaning that it can be transferred and cause disease in humans.

Strep zoo in horses is an opportunistic commensal bacteria meaning it can normally be found in the respiratory tract and cause disease. Humans who have contact with animals (horses, cattle, sheep, pigs, dogs, and cats) or consume unpasteurized milk products can be exposed to this bacteria, although it rarely caused disease. S. zooepidemicus can cause severe and potentially fatal disease in humans.

Until recently, mortality events associated with S. zooepidemicus or Strep zoo in swine had not been reported in the United States. This disease has been detected in an aggregating yard in Ohio and slaughtering plants in Wisconsin, North Carolina, Florida and Tennessee. Earlier this year it was detected in a Canadian farm.

High mortality at a commercial cull sow slaughter facility in Tennessee confirms this bacteria has the potential to be devastating to a swine herd upon introduction.

Effective Dec. 23, the Pennsylvania Department of Agriculture has designated Streptococcus equi subspecies zooepidemicus (S. zooepidemicus) in swine a dangerous transmissible disease. Under the Domestic Animal Law at, 3 Pa.C.S. § 2327(a) (relating to disease surveillance and detection), the Department has authority to monitor the domestic animal population of this Commonwealth to determine the prevalence, incidence and location of transmissible diseases of animals.

This disease has been designated a DTD to protect the swine industry in Pennsylvania, potential infections in swine should be investigated to determine how widespread this organism is in swine and to assist producers in reducing the risk of infection and spread of disease.

The Pennsylvania Department of Agriculture in conjunction with USDA VS is currently investigating the loss of a cull sow with heavy growth of S. zooepidemicus that died at an approved livestock market. The adult sow was in poor body condition and debilitated and was consigned by a small livestock dealer/hauler along with four other sows in a similar state.

The traceback premises where the sows were held and farrowed are currently under quarantine for S. zooepidemicus and diagnostic samples are pending.

The sows appear to have originated from a single farm that has been gradually selling down because the facility was run down and in need of many general repairs. Currently the farm consists of approximately 90 pigs. The three most debilitated sows were euthanized on the premises and diagnostic samples are pending. The remainder of swine on the premises will be moved by permit directly to a slaughter facility with no possibility of diversion.

Contact the office of Dr. Kevin Brightbill, state veterinarian, PA Department of Agriculture, at 717-705-1626, with any questions or concerns regarding this threat.

What do I need to be on lookout for?

What do I need to do?

If you suspect this disease in your herd, you should immediately call your accredited veterinarian. Based on clinical signs and history, a foreign animal disease investigation may be initiated to rule out African Swine Fever and Classical Swine Fever or other disease presenting with similar clinical signs. Your veterinarian will counsel you on disease and treatment options.

How do I prevent introduction of this disease into my herd?

Current evidence points to the disease moving through commingling of sows in slaughter channels. Enhanced biosecurity plans paying particular attention to risk associated with moving animals on and off the farm is key.

Pay close attention to how vehicles enter your farm and load and unload livestock. The goal should be to never have the driver enter your facility. They should either remain in their truck or go no farther than their trailer. You should require that only clean conveyances enter your farm to avoid the conveyance being a fomite to bring disease on to your farm. Your staff should load cull animals up to and not entering the livestock trailer and then clean and disinfect loading chute.

Exposure to direct sunlight has been shown to be beneficial, as cultured S. equi was shown to survive less than 24 hours on wood, rubber, and metal surfaces when in direct sunlight.