COLUMBUS, Ohio – After a period of relative calm during the 1990s, rapid changes in American families began anew during the 2000s, a new analysis suggests.

Young people delayed marriage longer than ever before, permanent singlehood increased, and divorce and remarriage continued to rise during the first decade of the century.

But the most troubling finding, researchers say, may be how American families have taken divergent paths: White people, the educated and the economically secure have much more stable family situations than minorities, the uneducated and the poor.

“The state of American families has become increasingly polarized,” said Zhenchao Qian, author of the new study and professor of sociology at The Ohio State University. 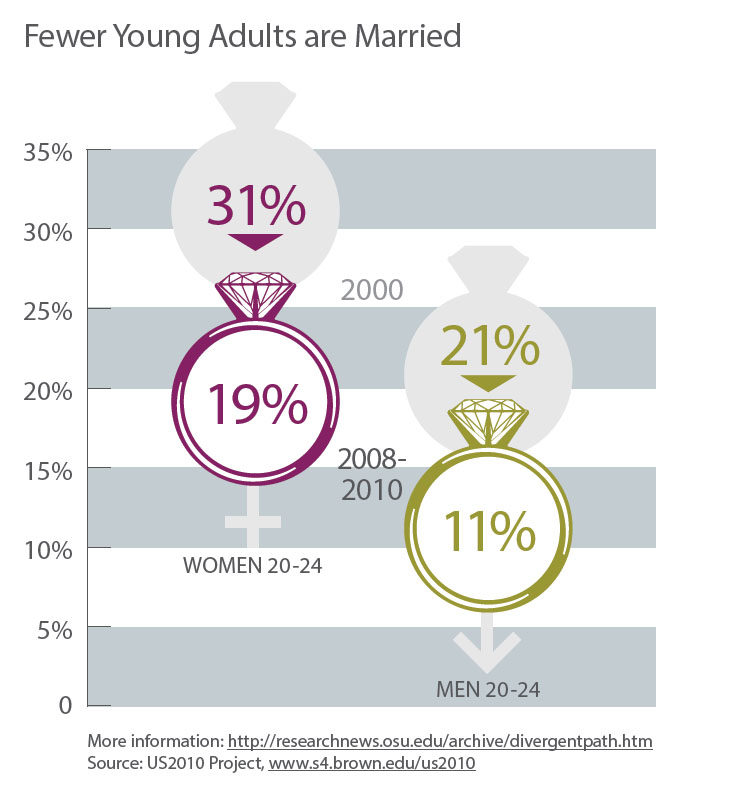 “Race and ethnicity, education, economics and immigration status are increasingly linked to how well families fare.”

Qian said the end result of the continuing changes he found in the 2000s is that “there is no longer any such thing as a typical American family.”

Qian’s analysis, based on data from the 2000 U.S. Census and the 2008-2010 American Community Survey, among other sources, is contained in a new report for the US2010 Project, sponsored by the Russell Sage Foundation and Brown University.

Qian said the Great Recession of the late 2000s played a large role in the changes he saw in American families during the decade covered by this study.

“There is no doubt that the gap between America’s haves and have-nots grew larger than ever during the 2000s,” he said. “This gap has shaped American families in multiple ways. It influences the kind of families we live in and the kind of family environment in which we raise our children.”

The recession may be a big reason why young people delayed marriage longer than ever before, with many moving back with their parents as they search for work or weather financial difficulties.

For men, the decline was from 21 percent to 11 percent. By ages 50 to 54, 13 percent of American-born men and 10 percent of women remained unmarried.

Divorce and remarriage also increased during the decade. Among currently married men, the proportion who were married more than once increased from 17 percent in 1980 to 25 percent in 2008-2010. Similar results were found for women.

“We’re seeing more evidence of a ‘marriage-go-round’ in which people go from marriage to divorce to remarriage, sometimes multiple times,” Qian said.

But all of these results mask the important differences in family outcomes depending on race, education, immigrant status and economic status.

Race was especially important. African Americans had the lowest percentage ever married at every age group, the highest proportion of permanent singlehood by ages 50-54, lower levels of cohabitation, highest divorce-to-marriage ratios, and a larger share of remarriages.

Education also had a strong role in family life. Those with less education married and cohabited at lower levels and divorced at higher levels despite low marriage rates.

“The growing racial, ethnic and educational divide in American families had a lot to do with economic resources, a factor that was especially important during the Great Recession,” he said.

But there is one group that still closely reflects what has traditionally been considered the “typical” American family, Qian said. Ironically, that group is immigrants.

Regardless of education and race or ethnicity, immigrants tend to be married at a higher rate, are less likely to cohabit (except for Hispanics), and divorce and remarry at a lower percentage when compared with their U.S.-born counterparts.

While American families went through many changes in the 2000s, the study found there were some areas in which family situations continued to stabilize.

For one, the surge in cohabitation seen in the past decades appeared to have slowed. In addition, the decade was a period of relative stability in living arrangement among American-born children, with the percentage living with two married, working parents increasing from 41 percent in 2000 to 43 percent in 2008-2010.

“The percentage of children living in poverty also was little changed by type of living arrangement,” Qian said.

“That is good news because any stability in children’s living arrangement presumably thwarted even larger increases in the proportion of children living in poverty during the Great Recession, when nearly 22 percent of children were officially poor.”

Qian said the fate of America’s children, especially those from economically disadvantaged backgrounds, remains one of the biggest issues facing families.

“Economic inequality is key to the polarization of American families, and the disadvantages of children living in single and unstable families will just worsen the racial and ethnic inequalities we already have in this country.”