SALEM, Ohio — Farmers complaining about glyphosate resistant weeds this year should make plans now if they want to get a handle on it for next year.

Mark Loux, an Ohio State University Extension weed specialist, said it is the only way producers are going to get a jump on the problem.

He said herbicide resistant weeds have poked their heads up in the fields across Ohio. Mainly, he has seen marestail, giant ragweed, common ragweed and waterhemp.

Loux said some farmers have a plan in place, but others are still trying to figure out how to handle the problem. He stressed how important it is for farmers to get a plan and start applying it.

He added that herbicide-resistant marestail was found in Ohio in 2002, and more than 10 years later, it is still a battle for farmers. He said marestail has been found in 20 percent of the fields in Ohio.

“Even a good marestail plan is not perfect, “ said Loux.

His advice for soybean producers fighting a marestail infestation? Get busy this fall.

“It’s essential for producers to complete mid- to late fall application of herbicide on the field of soybeans, assuming they are doing no-till,” said Loux.

The weed Palmer amaranth is causing the most concern in Ohio right now. Currently, Ohio has a lower infestation than Indiana, but the amount is expected to increase.

Loux described it as a game changer. It will cost producers more and changes the way producers use herbicides. He said Palmer amaranth has negatively impacted yields for soybean growers in Southern states, and predicts it will become a significant problem in Ohio. 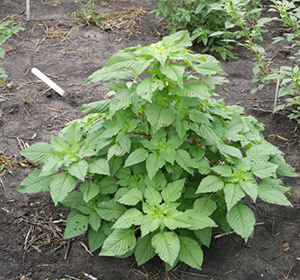 If it takes hold, Palmer amaranth could become even harder to control than the glyphosate-resistant weeds already in Ohio, he said. The weed has caused entire cotton and soybean fields to be mowed down in some states, according to Loux.

Palmer amaranth, which can grow three inches a day, can release nearly a half-million seeds per plant. And because the weed is glyphosate-resistant, many Southern growers, in addition to spraying, have had to hire workers to chop the weeds with hoes and pull them by hand, Loux said.

The potential financial impact for growers with a resistance problem with yield loss because the weed competition couldn’t be controlled, Loux said. Growers could find themselves having to pay $15 to $30 an acre to control it, and in some cases even higher costs have been incurred, from $20 to $40 per acre.

Loux said there are some steps producers can take to try to prevent further spread of Palmer amaranth and waterhemp, including keeping a look out for new infestations especially when the plant is small enough that herbicides will still be effective.

He added that it is essential to use the right herbicide at the right time to control the weeds. Both waterhemp and Palmer amaranth have extended period of emergence and require a combination of pre-emergence and post-emergence herbicides.

Loux said it is essential to prevent further seed production — by any way possible: tillage, mowing, and pulling the plants out by hand.

Loux also urges producers to be on the lookout for giant and common ragweed.

Loux said there is a moderate to severe infestation of giant ragweed in 4 percent of the fields in Ohio. He said it is proving a problem for producers because the plant has a long life and a long seed life, which means it can spread easily.