The two lifestyles seemed similar. The farmer and the bum both worked outdoors, they both set their own rules and made their own way in life.

But as Diffley matured and later became a farmer herself, she found the role of farmer evolving into something more similar to a “hero.”

Related: Farmers encouraged to get involved with federal government

Diffley was raised in rural Wisconsin, where her family grew and canned most of their own fruits and vegetables. They also sold sweet corn alongside the road.

But her career in agriculture evolved in 1985, when she joined organic farmer Martin Diffley on his farm in Eagan, Minn.

That included sweet corn and tomatoes, but also “a really handsome farmer.” The two were married and have farmed and worked together ever since.

In 2012, she released a memoir about their experience, Turn Here, Sweet Corn.

The book focuses on relationships between community, family and farming. A central theme is land use and development.

The couple faced urban pressure in 1988, when 20 acres of the Diffley family’s 120-acre farm were needed to build an elementary school. Sewer and water infrastructure crossed the remaining land to serve the school, and assessments were placed against the rest of land.

The Diffley family sold the rest of the farm for development and from 1989-1993 it was bulldozed for housing projects.

They were allowed to continue to farm the land until it was developed — but each day they witnessed an erosion of the land they loved.

During this period, Atina and Martin farmed on 18 different properties within a 30-mile radius to meet their certified organic production needs.

She recalled how this difficult time affected their lives, causing deep anger and frustration in her children.

“We were farming on land that was immediately adjacent to land that had no life,” she said.

In 1991, they purchased a new farm in Eureka Township, Minn., and began the three-year process of converting it to organic production.

During her speech, Diffley encouraged organic farmers to educate others about what they do — something she and her husband have done their whole career. They teach other growers, but they also educate politicians and members of the U.S. Department of Agriculture.

“I encourage you to talk about it through your own experience,” she said. “We have to be educators.”

She also encouraged farmers to view organic certification as a line of defense against criticism and legal fights. She said certification can serve as evidence and is a federally registered document.

“Certification not only helps us in the marketplace, but it actually protects us in matters of drift and matters of eminent domain,” she said. 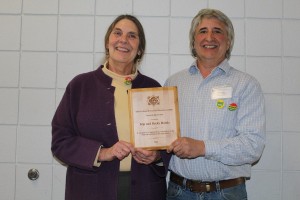 The Rondys farm 120 acres of certified organic, including microgreens, salad mix, mushrooms, greens and other seasonal produce. They use high tunnels and sell their produce at the Athens Farmers Market, two CSAs, and at stores and restaurants in Athens and Columbus.

Kip Rondy said he and his wife take stewardship seriously and that stewardship does not stop with the soil. He is also an outspoken critic of the shale gas drilling industry — particularly the disposal of waste drilling materials.

“Our region — southeastern Ohio — is under attack,” he said, referring to billions of gallons of “radioactive poisonous fracking waste” being stored beneath the ground.

He and a group of helpers carried in a large banner during his speech that read “Our water, our lives.” 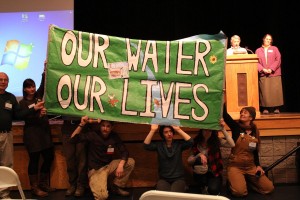 He said the people of southeastern Ohio have worked to reclaim their land from the coal industry, timber cutting and oil and gas, and have no reason to believe the current drilling will be different.

“We of Athens County — we ain’t going to take it,” he said, adding that “when our work is done, the forests will echo in laughter.”

In early February, Rondy participated in blockade effort to block the drive leading to a fracking waste disposal site. He and seven other activists were peacefully arrested for trespassing.